The Mod Squad: Star Wars Quake: The Call of the Force

The Mod Squad: Star Wars Quake: The Call of the Force

RIP: A Tribute to the mod that almost, but never quite was.

The road to releasing a complete modification can sometimes be a bumpy one. Oftentimes, swept up in the initial rush of excitement and enthusiasm for their project mod teams make plans and promises that ultimately are unable to be kept. Most have legitimate reasons for doing so. Real world responsibilities, unforeseen events and other job opportunities often lure away otherwise capable modders, and other times immaturity combined with the scantiness of a promise made via email is simply not enough to bind modders to their commitment. Sometimes even the best laid plans go to wrack and ruin, and in this Rest in Peace (RIP) edition of the Modsquad we’ll take a look at a cancelled modification whose promise foretold the stars and the sky for gamers, yet ultimately yielded frustration for fans and unfilled hype from the developers. Presenting one of the most beloved mods in the mortuary, Star Wars: The Call of the Force.

Begun over six years ago as a modification for the original Quake, Call of the Force garnered a tremendous amount of excitement when it was originally announced. Star Wars Doom had generated excitement before, but here at last was what both FPS gaming and Sci-Fi fans had been clamoring for, an addictive action blend of their favorite gaming genre with a high quality interactive Star Wars experience.

Quake was king at the time, and gamers from all genres were tickled pink at the thought of swinging a lightsaber and fighting off stormswtc using the power of ID Software’s kick-ass graphics engine. It was a match made in heaven, and as the developers poured their sweat and blood into the project a bonafide mod phenomenon was born.

Fans swarmed to the SWTC boards posting ideas, suggestions and speculating endlessly about the release date of this much-anticipated project. It was an era of innocence for many mod makers – competition from other teams working on similar projects was scarce and the vigilant, aggressive copyright infringement policies initiated by such giants as Fox and LucasFilm had yet to mature into the iron-clad barriers that we see today.

Concurrent with SWTC’s development came the digitized re-release of the Star Wars Trilogy in theaters, marking the beginning of a revitalized interest in George Lucas’s masterful sci-fi franchise. Star Wars Quake and the new enhanced trilogy – the twin enticements of interactive and visual media complemented one another well and fed off the hype generated by countless fans – it was a good time to a part of SWTC.

Then, abruptly, the good times came to a halt. For various reasons, the original Star Wars Quake team folded, leaving only one member, Red Knight, to assemble a new team to continue with the project. New members such as Paul “Privateer” Rodgers and Adam “ApocX” Cooper joined the team, lending their talents to the continued development of the project. The team worked hard and talked even harder, promises were made, features hyped – it looked like Star Wars Quake would at last be a reality – and the fans, rejoicing, poured in their enthusiasm and devotion.

In return the SWTC team provided a plethora of enticing media, producing screenshots, describing force powers, adding a compelling storyline and listing a slew of enhanced features that would have made Yoda green with envy. However, hype is only self-sustaining for so long, and as time began to drag on many surprising changes occurred. Team members left by the dozen and came on board by the dozen (during its lifetime over a hundred developers contributed to the project), updates started to become scarce, fans began to grumble. The team dragged their feet for so long that ID Software came out with a sequel to Quake (Quake II) before the mod was complete. In lieu of the advances offered by the Quake II engine the team decided to switch graphic engines, causing a great deal of grumbling amongst its die-hard followers. After the switch to Quake II was made, another renaissance era ensued for SWTC, with all the attendant gushing and speculation accompanying an increasingly growing fan base. A genuine effort was made to push the mod towards completion, and beta releases began to flow forth.

Yet even in the midst of SWTC’s revival problems arose – the Quake 2 engine, it seemed, could not produced the lighting effects needed to sufficiently and convincingly render a lightsaber. Fans were divided as to the promise showed by the beta. Star Wars was now a hot property for modification teams everywhere, and LucasArts, sensing the change in the wind, began to enforce their legal suzerainty, threatening legal action against mod teams and web sites whose content appeared to infringe upon their trademarks. Questions were raised by fans, beta releases dried up. More grumbling ensued and massive team defections followed in its wake. Time passed, and the project slowly passed on into limbo.

Resurrected and maintained by stalwart individuals such as Chris “RipVTide” Sisk and Scott “Fushanks” Boyce, the mod seemed to rally and slump at various times in its late existence. Ironically enough, one of SWTC’s biggest problems was its popularity. Quite a few programmers were lured in by the mod’s appeal (in fact, there was even a time when developers had to submit applications before being allowed to join the SWTC team) and after a few weeks or months would lose heart, interest or a combination of the two, and would jettison away faster than C-3PO and R2-D2 from a Corellian cruiser, leaving much of their work unfinished. As stated by Boyce,

“Going back through the news archives on our site you can count dozens, literally dozens, of names of people who at one time or another worked on SWQ. That’s been a major problem. Every time someone has left the project they’ve left a trail of half-finished work for the remaining team to pick up. So we’ve had a lot of cross-over in terms of responsibilities.”

During this time, Quake 2 itself was passing into history as Quake III: Arena was released, and ultimately, basing itself upon Quake III technology, Jedi Knight II: Outcast from Raven software produced a lightsaber swinging experience that seemed to fulfill all the promise of The Call of the Force. By this latter stage SWTC was akin to a crippled Galleon, barely floating along with a small and dedicated crew who were nonetheless ill equipped and undermanned – unable to bring their beloved vessel into port. The ranks thinned out even further until at last, with only one or two developers holding on, and a last ditch decision in favor of a final engine switch to Jedi Knight II, the straw gently sailed onto the camel’s back.

On 9/07/02 Red Knight officially declared The Call of the Force dead, thanking the fans and lowering the casket before onlookers could gawk too loudly. As Scott “Fushanks” Boyd recalls,

“It was a very ambitious project. Perhaps under ideal circumstances it could have been completed. I think that’s the most important lesson we all learned: Deadlines are real, so don’t promise what you can’t deliver. Don’t get caught up in telling people the great things you have planned, because frankly, your plans amount to jack shit. Work steadily, work quietly, and only flaunt what you have to show. I know it is like an unwritten law that all mod project leaders be self-righteous jackasses with an inverse attitude to talent ratio, but it does not have to be that way>.”

Today the SWTC site is still frequented by a small cadre of die-hard fans, but talk about the project is minimal and there are currently no plans for any further development. What remains however is quite a sight to see, and potential modders would do well to visit the website as an excellent example of the way a modification should be presented – it still contains all the screenshots, videos, storyline and media tidbits that made such a splash in the late 90’s. Inspired by the long legacy left in its wake, I downloaded and tested the latest version.

The mod itself currently stands at a multiplayer beta 1.9, with weapons, bot-support, unique maps, characters and game play that are still quite fun to this day. I found my own playtime to be quite fluid and entertaining, even alone with bots. Sessions were fast and furious, and the bots possessed an uncanny ability to evade my weapons fire. At this early state of development, there is still a sense of the frantic in SWTC, with bunny hopping and strafing the preferred elements for survival. The lightsaber’s appearance had been improved, and the sounds were spot on. The majority of the weapons had a pleasing sci-fi look to them, though I would have preferred more rapid fire blaster-like guns or creative lob throwers (ala Unreal Tournament) over the long range, single shot weapons that dominate most of the environments. The firing effects could be improved upon as well. The early implementation of force powers provides a spectacular twist to gameplay and adds a bittersweet recollection when one considers that this mod could have been the first of its kind to provide such a feature in-game.

The Quake II engine, modified for SWTC, is still an eye pleaser and the environments come across as uniquely Star Wars. With the menu and character selection I found much to like as well, with a stylish attention to detail that says, “Made for Star Wars fan by Star Wars Fans.”

Ultimately SWTC stands as a testament to the triumphs and tragedies of creating a modification – in its long storied existence community, friendship, teamwork and all the best aspects of creative collaboration were intermixed with frustration, anger and disappointment. Despite the continued legal ire of LucasFilm today, other Star Wars modifications on newer engines such as Unreal Tournament 2003 are carrying on SWTC’s legacy, and the mod community is already buzzing over proposed Star Wars modifications for the as-yet unreleased Doom 3. Each in turn will owe a small debt of thanks to Call of the Force for showing, in the end, just how fun a mod can really be. 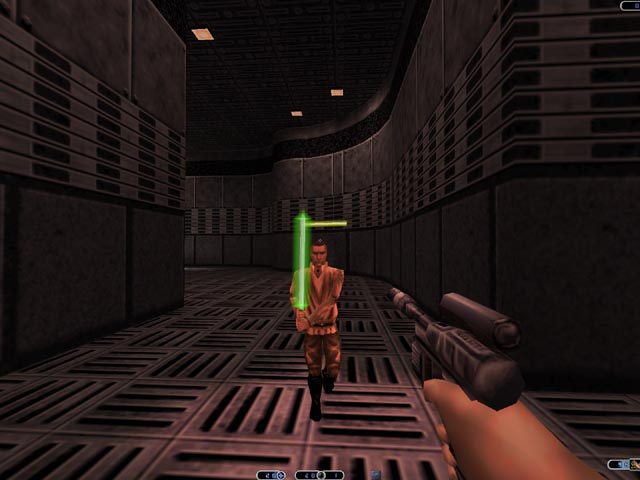 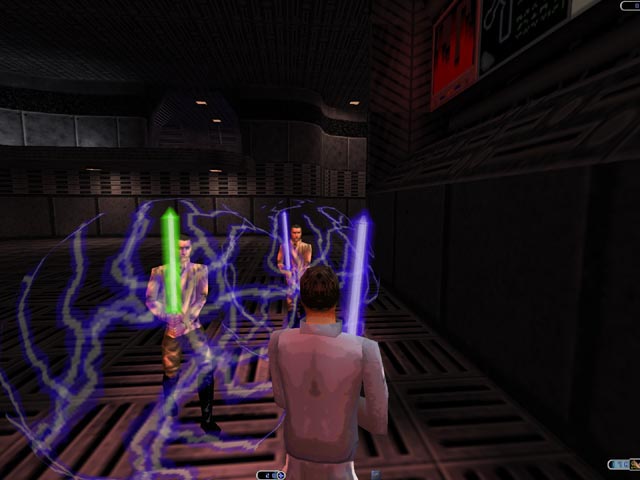 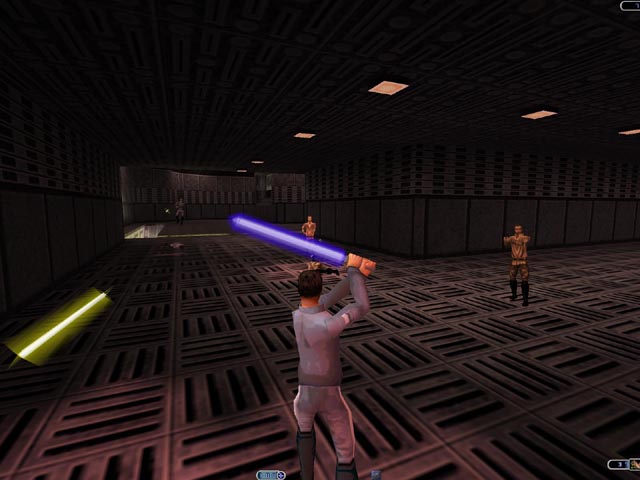 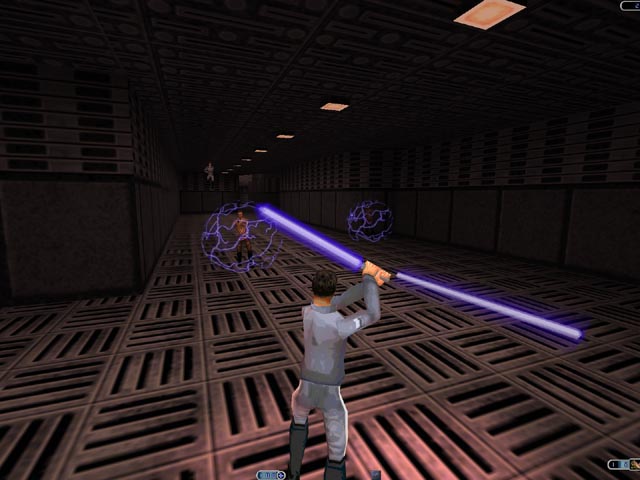 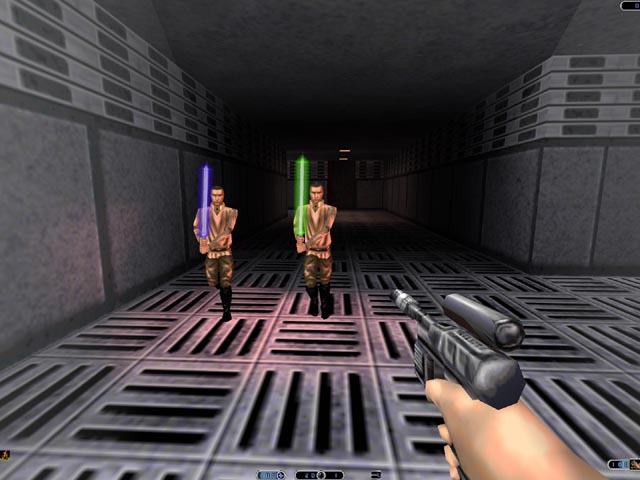 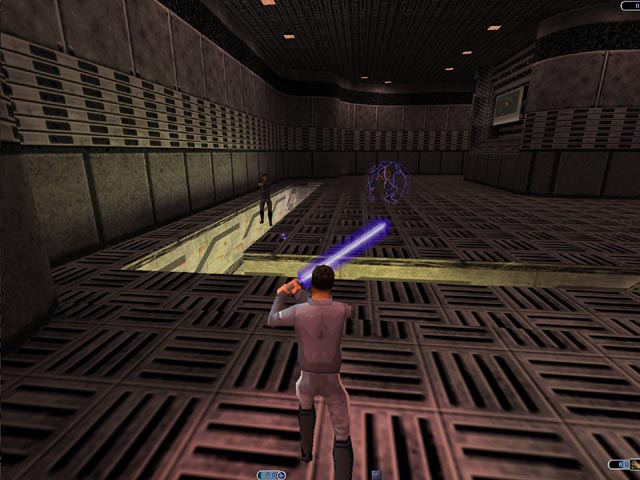 The author would like to thank Scott “Fushanks” Boyd for his assistance with the preparation of this article.