World War II. Each year that distances us from that mighty conflict seems to generate a renewed wave of interest amongst audiences nationwide. What my professors at Berkeley often referred to as “The 20th century’s most popular war” has become ensconced in our national mindset as a defining event in the development of the United States as a world power. These days, that power translates to box office draw as cinematic tributes like Saving Private Ryan and Band of Brothers (and its lesser known musical spin-off Band of Smothers Brothers) paved the way for developers to bring the fight against the Axis to our Pc’s. With the advent of EA Game’s smash success Medal of Honor: Allied Assault (and its numerous add-ons), Valve’s superb Half-Life modification Day of Defeat and most recently Infinity Ward’s sublime Call of Duty it was only a matter of time before everyone’s favorite war made its way to the next generation of modification releases. While most retail releases and modifications have focused on the conflict surrounding the Allies and Western Europe, it’s only recently that games have begun looking at other theatres of the war, such as the Pacific campaign (Take EA’s Medal of Honor: Rising Sun for example) against the Japanese or the brutal Eastern Front.

In this installment of The Modsquad we’ll take a look at Red Orchestra, a modification for Unreal Tournament 2003 that takes players to the cold and forbidding world of the Eastern Front, where for years Stalin’s Red Army fought a brutal war of attrition against some of the Third Reich’s most powerful Panzer divisions.

Overview
Unlike the Western theatre of war, where the Allied nations fought on all fronts to liberate Europe from the grip of Hitler’s Nazi regime, the campaign on the Eastern Front consisted almost solely of German and Russian forces, whose ethnic and national animosities exacerbated the viscous nature of the conflict. Under equipped and nearly always short on supplies the Russians fought a gruelingly slow and bloody campaign against the German invaders much in the same way they had fought against Napoleon a hundred years earlier.

Red Orchestra attempts to recreate the feeling of those days, putting the player in the boots of either Russian or German infantry, slogging it out amongst the bleak battle scorched ruins of a Russian city or the ice-laden trenches of a forgotten wheat field.

Gameplay
The gameplay in Red Orchestra is a potent blend of squad based combat and realism. It has all of the explosive elements of team versus team online gameplay that one would expect from Day of Defeat, and intersperses this experience with a healthy dose of slow, pondering realism, much like the ultra-realistic Unreal Tournament mod Infiltration. Players can choose to take the role of either Russian or German infantry and may only outfit themselves with equipment that a soldier can realistically carry. Each piece of weaponry used in Red Orchestra is modeled straight from the history books, and whether it’s the standard MP-40 submachine gun or the scoped Mosin-Nagan rifle, each carries a gritty realistic feel that underscores the brutal nature of the combat they’re about to enter. In addition to firearms, each solider also has access to grenades, knives and pistols.

Once you’ve suited up for combat you get to choose just where you’ll fight (the levels in Red Orchestra are modeled after historical battles on the Eastern Front) and what type of game you’ll participate in. The Red Orchestra team plans to introduced several different modes of gameplay (including Capture and Defend, Last man standing and others) but at the time of this writing only one mode was available with the 1.0 beta, team deathmatch.

Once inside the level, players will find themselves instantly immersed in the sights and sounds of combat. In order to win the level each tame must vie for control of different Hold Areas (similar to the flags in Day of Defeat) and hold them long enough to cement their team’s position. Battles can rage back and forth as certain positions are gained, lost, gained and held again. Player classes are divided strictly on the basis of ability, making the standard delineations between heavy gunners, assault troops, stock infantry and officers, and since only one or two players can hold the coveted sniper position it seems best to use coordinated team tactics.

At the time of my play testing Red Orchestra had just been released, and most players were content to eschew tactics and simply run n’ gun their way around the map. With the exception of a few spawn campers (players who stalk the starting area to score easy kills) most seemed friendly and enthusiastic about exploring the mod. Matches raged back and forth, and much like in Day of Defeat most players were back in action pretty soon after being killed, thanks to Red Orchestra’s minimal re-spawn time.

What made matches slower than most however, was the other, non- Day of Defeat component found in Red Orchestra, iron-sight target acquisition and realistic combat movement. In Red Orchestra, players don’t receive a cross hair. Instead they are required to aim their firearms, using the iron sight of that particular weapon, in order to draw a bead on their intended target. Players are allowed to ‘shoot from the hip’ but their accuracy is far less, and unlike Call of Duty (where firing from the hip is just as accurate as firing with iron sights), players need to learn how to use their iron-sights in order to survive. This oft-argued about feature will undoubtedly draw a hardcore audience, as many would be online troopers balk at the idea of entering a battle without crosshairs. I definitely felt insecure without them, but after a while came to enjoy this unique aspect, realizing that such a feature will discourage many of the campers, L33t speakers and other net trolls that tend to haunt such online venues. What this all amounts to for Red Orchestra is a great likelihood that it will attract a dedicated audience of players, rather than player haters.

The other part of the game experience comes with the stamina system, which only allows players to run or sprint for a limited amount of time before slowing down. Resting helps to recuperate stamina, but players also need to keep their equipment load in mind – the heavier it is, the slower you are. Stamina reserves are crucial, so it’s important to keep an eye on them, that extra burst of speed might mean the difference between outrunning a hail of machine gun fire or being caught in the blast radius of enemy incendiaries.

If all this sounds a little complicated, don’t worry. Red Orchestra includes a tutorial that allows you to experiment with its various aspects of gameplay to your hearts content. The tutorial needs some work, a little more guidance and explanation for new players, but that should come in future versions.

Graphics and Sound
Fighting on the Eastern Front never looked so good. From the burned out bombshell cities laden with snow and snoot, to the weapons and player models that inhabit them, Red Orchestra stands as first rate. Utilizing the best aspects of the UT 2003 engine, Red Orchestra presents a graphical feast for the eyes that engages from the first machine gun pop to the last grenade explosion. At the time of this writing, there were still unfinished areas in certain levels, but the majority of the game had an incredibly lifelike and enveloping feel – overturned cars belched smoke on deserted street ways, half-caved in bistro’s provides cover as bullets streamed overhead and the desolate wheat fields surrounding forlorn villages were pock marked with artillery craters the size of five men. An incredible attention to detail and realism makes the environment in Red Orchestra one of its most compelling and attractive features.

Whenever possible, the game also uses realistic sound effects instead of overdone Hollywood effects. At first hesitant about this, I later came to appreciate the distinctive sounds each gun or explosion made. The dull pop-pop-pop of a machine gun or the brutal clang of an empty clip being ejected from a rifle added a truly visceral quality to the experience and made me feel that much closer to the actual events.To top it all off, a mournful hymn, rather classical in nature, plays in the background while you’re shooting and dying, adding a feeling of desperation and sadness to the conflict. That’s actually a good thing, as few mod’s I’ve seen have taken advantage of the ability to customize their own music.

Summary
All in all, Red Orchestra stands as an excellent addition to the current lineup of World War II modifications. Currently at beta 1.1, this is one of the few modifications I’ve reviewed that has displayed the potential to become a retail release almost from the get-go (hint hint Epic). There are a few rough edges being hammered out through play testing and design right now, and there will almost certainly be a large group of players who avoid it because of its preference for iron-sights and stamina systems over cross hairs and bunny hopping, but with further refinement and continued support from the community Red Orchestra has the makings of a true winner. 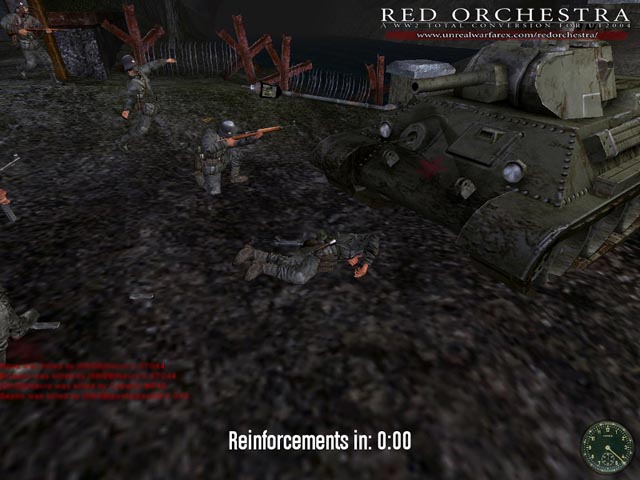 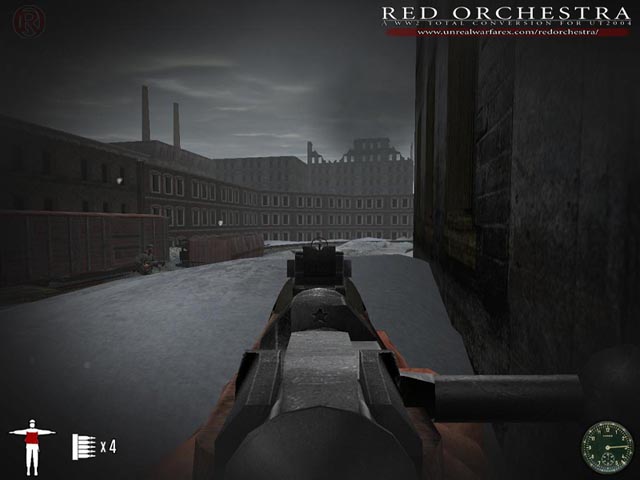 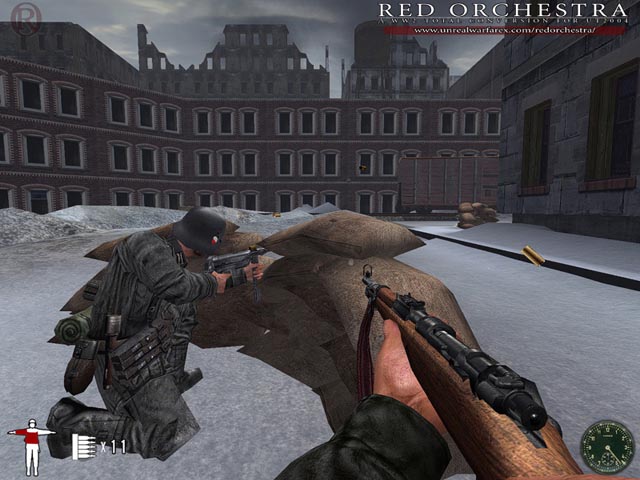 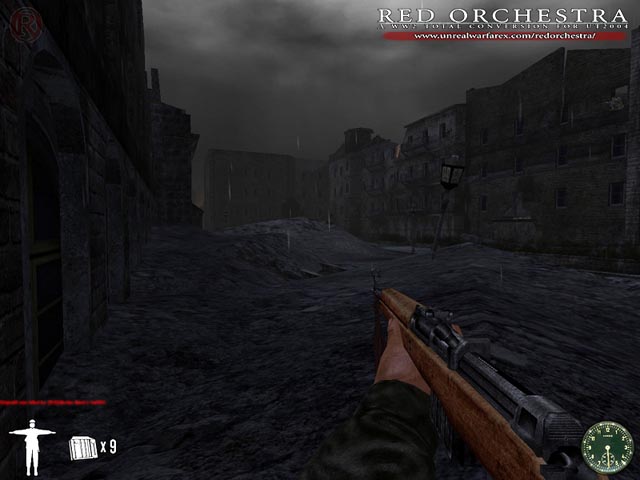 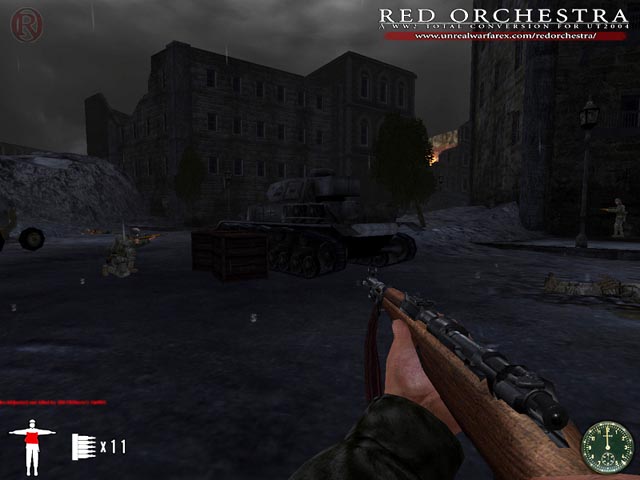 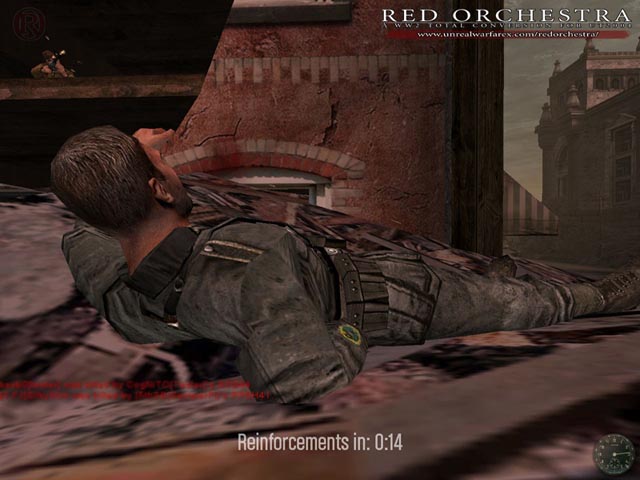