The Mod Squad: Battlegrounds for Half-Life

The Mod Squad: Battlegrounds for Half-Life

Battlegrounds for Half-Life – A “Revolutionary” Mod

One of the wonderful things about modifications is their variety. In the late 90’s and at the turn of the new millennium, when modifications for Quake III and Half-Life reached a fever pitch, many would be modification teams began taking a fresh approach to their projects in order to separate themselves from the massive and largely undistinguishable crowd of Star Wars, Counter-Strike, World War II and similarly related shooter themed mods. Instead of turning out yet another class based “team vs. team” mod, many amateur designers created unique projects that had hitherto been unknown in the world of total conversions. Paintball, bumper-cars, real time strategy and role-playing experiences began to be born from retail first person shooters, providing players with new avenues of adventure and exploration. Those who stuck with traditional first person fighting opted to explore different eras like the American Wild West, Ancient Roman Empire or the fantasy reams of their own creation.

Today we’re going to take a look at a mod for Half-Life that continues in this proud, if somewhat unorthodox tradition, adding spice and variety to the dense morass of hum-drum shooter mods out there today. Ladies and Gentleman I present to you Battlegrounds, a modification for Half-Life (Yes, they are still making mods for Half-Life, and with HL 2 right around the corner you can bet that we’ve only seen the beginning) that takes us back to the days of America’s infancy, when the sons of liberty were struggling for their independence against a tyrannical monarchy across the Atlantic. Of course, I’m speaking about the Revolutionary War, complete with muskets, powdered wigs and rallying cries of “Freedom!”.

Battlegrounds pits soldiers of the American revolution against Britain’s finest in objective based team deathmatch scenarios. Players can choose from Officers, Minuteman and Continental Army Infantry for the Americans, or Officers, Royal Infantry and Loyalists for the British. Each class has its own unique strengths and weaponry, modeled straight from the history books. Those who decide to join the redcoats for example will find that the Loyalist carries a hunting musket whose accuracy is greater than the Royal Infantryman’s ‘Brown-Bess” musket, but whose shot caliber is smaller, yielding less damage. The same holds true for the Minuteman’s (the American equivalent of the Loyalist) strengths versus regular American infantry.

By the way, when I speak of ‘accuracy’ I’m using that term in the loosest sense – these muskets couldn’t hit the broadside of a barn, and often don’t just to spite you. In an attempt to mimic real Revolutionary era combat, the team at Battlegrounds decided to employ a weapons system in which the muskets are highly inaccurate at long distances and while moving. That’s right folks, these are real muskets you’re firing, and after one shot it’s reloading time with powder, shot and ramrod. While this can be frustrating at times, it actually turns out to be one of Battlegrounds biggest draws. The muskets and pistols are a blast to fire and – when you successfully hit your target – quite gratifying too. The reloading animations are well done and thankfully much shorter (perhaps 5 to 7 seconds) than the agonizing minutes a real soldier of that era would have to endure. If you’ve used up your one shot and the enemy is closing then you’ll have to rely on your trusty bayonet, something which is almost as perilously inaccurate as the musket itself.

Unit models look good, even at this early stage, though movement animations are still rather jerky. Environmental sounds are nice too, with the cries of horses, men and musket fire mingling in combat. The maps are broad, open and provide good environments for this type of combat. Much more work needs to be done of course, both in detail and variety, but the current offering is quite adequate. There are some additional improvements that could benefit this mod right away however. Unit animations that actually show a soldier reloading would add to the realism, as would a first person view showing the thumb cocking back the flintlock.

Though it may sacrifice some realism, the option of having a knife and a brace of at least two pistols for each soldier would do wonders for the combat experience. Perhaps even the option to take out both pistols and fire them at the same time rather than one at a time. As it stands right now, soldiers fire once and are essentially defenseless until then can reload (or opt for a suicide charge with a bayonet, knife or saber). These often leads to an amusing, though at times tedious stalemate situation where each side fire once and then scrambles to reload without though of tactics or teamwork. The classes need more differentiation, as well as greater variety (i.e. farmers, mercenaries, volunteers, perhaps even Black minutemen). Right now, only one player per server can access the Minuteman or Loyalist classes, something which quite a few players have voiced their concern over. The voice commands are ‘okay’ as they are right now, but could use better voice acting within a more urgent battlefield context. Another thing that stands out about Battlegrounds is its community. With each mod you’re always going to attract a certain kind of player, and unfortunately many of the more brutal combat themed mods today seem to have attracted an audience that is far more abusive (both in language and online conduct) to itself than any video game villain could ever be. With Battlegrounds however I’m pleased to report that this is not the case. The community is small, enthusiastic, and with only a handful of servers running right now you’re likely to run into the same people many times.

As of this writing Battlegrounds is still in its infancy (at version 1.2.1) but is growing with remarkable speed. Talked about improvements include more classes like the Hessians (the German mercenaries used by the British), more muskets and melee weaponry. Battlegrounds has also staked its claim as the only revolutionary war mod for Half-Life 1 and 2, so there may be future development taking advantage of Valve’s new Source engine as well. If you haven’t yet had a chance to check out this highly original mod, then I encourage you to do so. It is fun, inventive and a refreshing change from the usual run of shooters out there. Tally Ho lads! 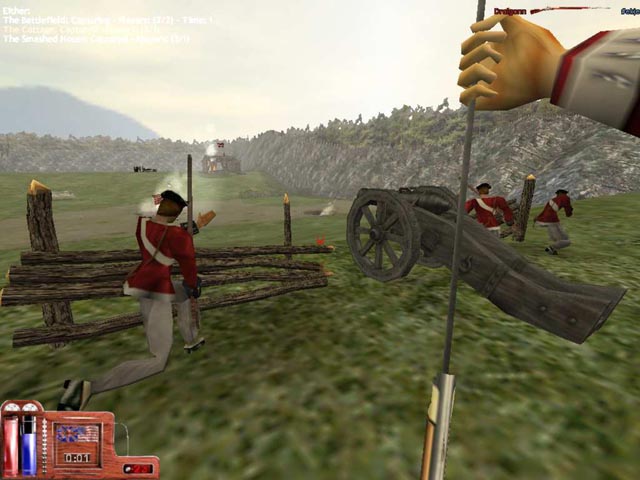 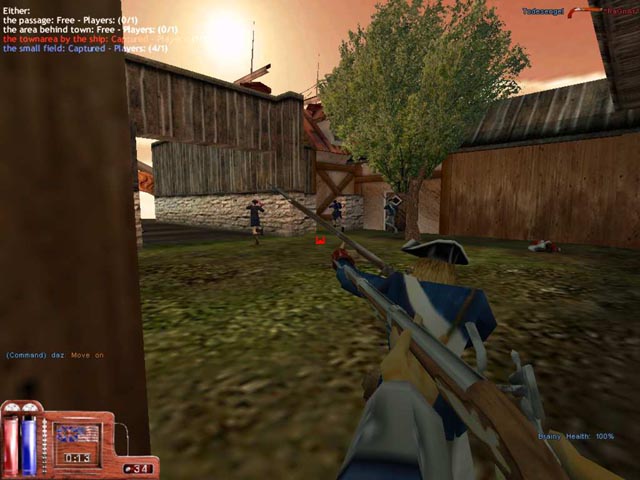 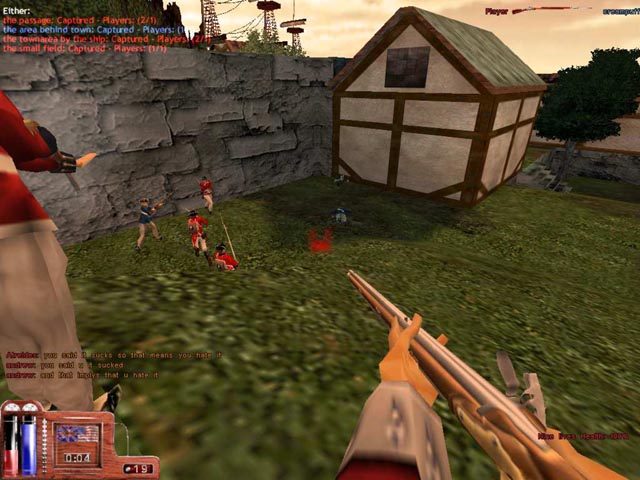 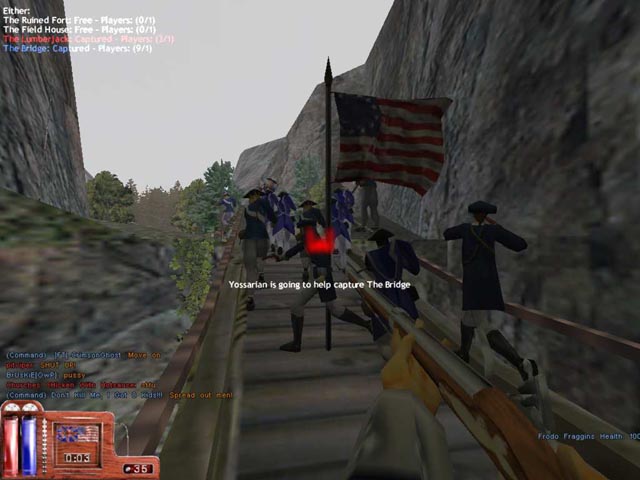 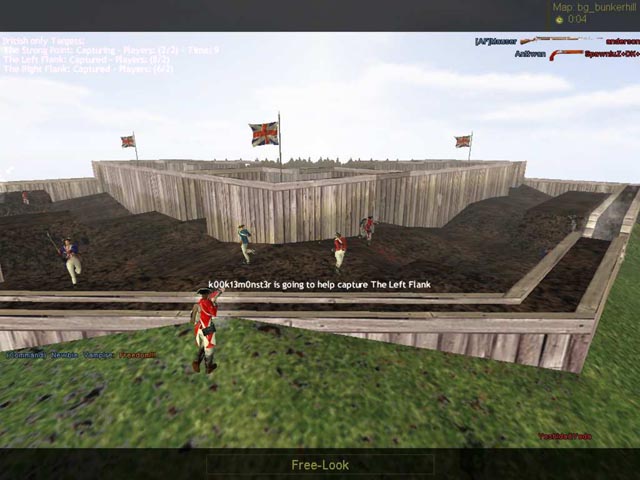 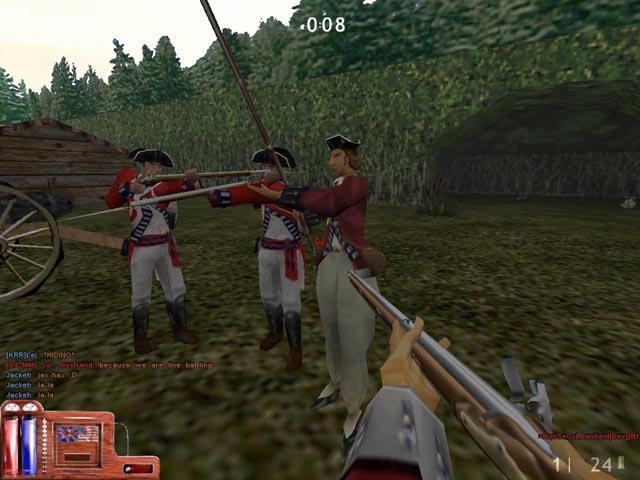 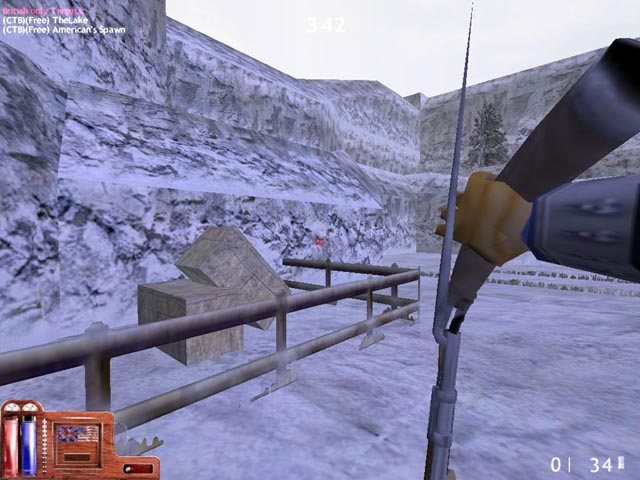 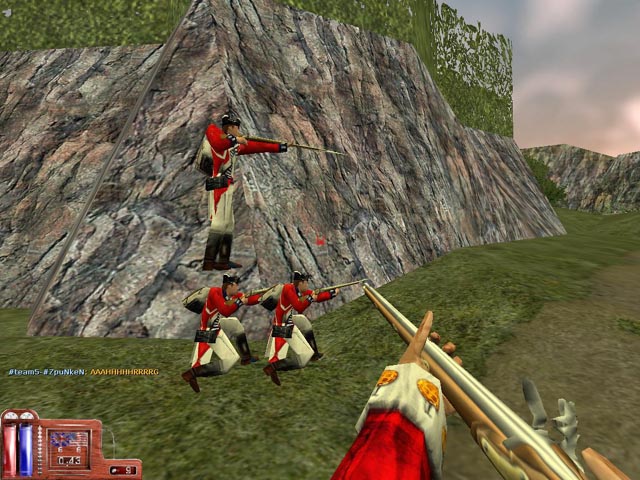