The Mighty Quest for Epic Loot Now in Open Beta 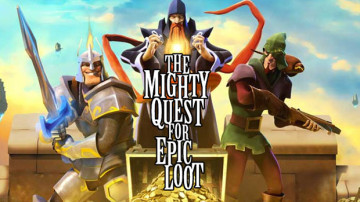 Ubisoft has announced that The Mighty Quest for Epic Loot is welcoming all players into its open beta on Steam and Windows PC. The game is now accessible to everyone willing to stockpile gold, loot neighbors’ chests and brag about maniacal castle defenses in their quest to become the undisputed master of Opulencia.

To kick off the permanent opening of the kingdom in the skies, The Runaway is officially joining the quest. She brings the epic looting team of the Knight a.k.a Sir Painhammer, the Archer a.k.a Blackeye Bowgart and the Mage a.k.a The Earl of Evilosity to four. Experienced looters as well as newcomers will enjoy her striking speed that gives her a clear edge during combat. This rocker girl shows no mercy when it comes to hacking and slashing; she rocks the axe like nobody else.

Players beware, Opulencia is now more dangerous than ever thanks to the new deadly possibilities offered by the brand-new Open Creation tools. Closed-beta revealed how imaginative looters could be when their precious treasure was threatened and to spice up the variety of castle defense options, Open Creation was put into place. The open beta allows players to stretch the limits of their creativity and cleverness by customizing trap setups and creature placement to fully control their (almost) impenetrable defenses. Open beta is just the beginning of the adventure, as the Mighty Quest will only keep evolving and improving over time.