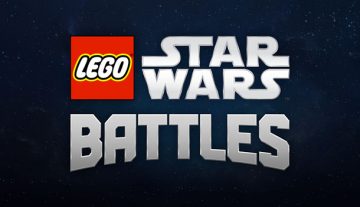 Developed by TT Games Brighton and published by Warner Bros. Interactive Entertainment and Playdemic, LEGO Star Wars Battles allows players to mix and match characters and vehicles from all eras of the Star Wars galaxy, building a deck of light side or dark side forces to battle in fast-paced, competitive matches. With intuitive touch controls, players will deploy troops and build LEGO towers on the battlefield to defend and capture territory as they attempt to destroy their opponents’ base.

“For over 15 years, LEGO Star Wars video games have been offering a unique take on Star Wars, engaging and delighting fans around the world,” said Douglas Reilly, Vice President, Lucasfilm Games. “We are thrilled to bring new LEGO Star Wars experiences to mobile audiences with LEGO Star Wars Battles, which introduces new ways to play in a galaxy far, far away that is still uniquely LEGO.”

Featuring content from all nine saga films, Star Wars™: The Clone Wars™, and Rogue One: A Star Wars™ Story, players can collect iconic heroes and villains such as Luke Skywalker, Rey, Obi-Wan Kenobi, Boba Fett, and Darth Vader, along with characters such as Porgs, Stormtroopers, Battle Droids, and a variety of vehicles from AT-ATs to TIE bombers, and even the Millennium Falcon. As players progress and level up, they will unlock different arenas based on familiar Star Wars locales, including Scarif, Naboo, Hoth, Endor, Geonosis, and more.

LEGO Star Wars Battles is coming in 2020 to the App Store and Google Play and will be available to download for free with in-app purchases.

I've been an avid gamer since I stumbled upon ZORK running in my local Radio Shack in 1980. Ten years later I was working for Sierra Online. Since then I've owned nearly every game system and most of the games to go with them. Not sure if 40 years of gaming qualifies me to write reviews, but I do it anyway.
You might also like
Gaming NewsiOSVideo Game Trailers

Martha Is Dead Confirmed for PlayStation 5 in 2021