Over the past few weeks I’ve had the pleasure to be playing an early build of Tomas Sala’s upcoming game, The Falconeer, and I have to say I am very impressed.  I really had no idea what to expect going into this; perhaps a twisted version of actual falconry where handlers were weaponizing their birds?  I had no idea the falcons in this game were of mythical scale, the size of the fabled Roc from Middle-Eastern culture.  Marco Polo even wrote about these mammoth creatures, and yes, in The Falconeer your bird is large enough to saddle and support a passenger.

I’ll get this out of the way at the start.  This game could have just as easily been designed with dragons, dragon riders, breath weapons, and all the medieval trappings, so I want to applaud the designer on creating something truly unique and special here.  Let’s take off… 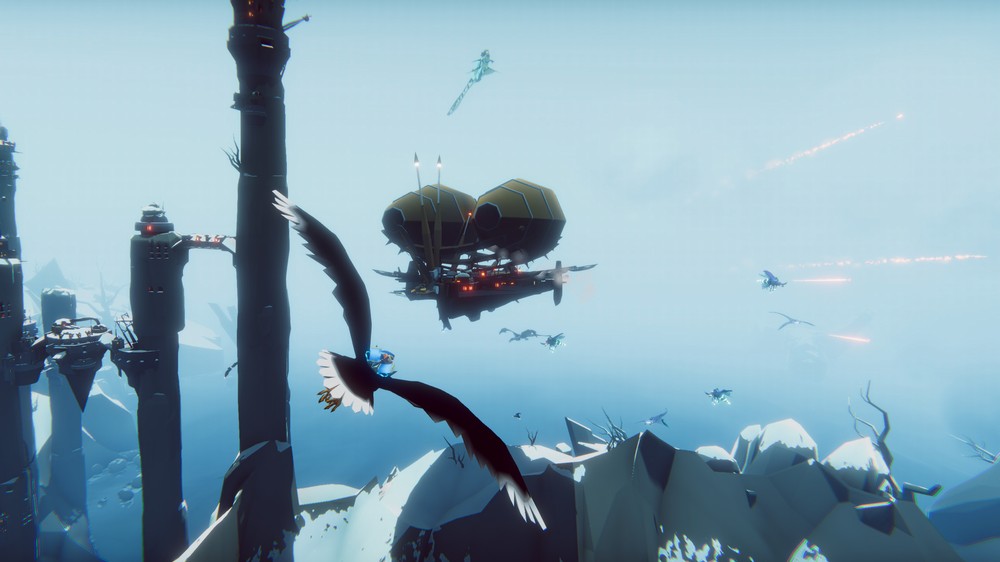 My preview copy had a prologue and the first few chapters of the game which offered a surprising amount of content.  There are already cutscenes, narration, and hours of professionally recorded voiceovers for a variety of characters including your spunky wingman – more on him in a bit.  The prologue sets up the story of you engaging in a performance test to prove you are worthy to be in the service of the Empress; a slick way to hide the tutorial that will teach you just about everything you need to know to play the game.

You control your falcon with the left stick and pan the camera with the right.  Buttons and triggers handle dashing, evasive rolls, and firing your electrical weapon.  It’s pretty basic stuff but nicely designed so you are instantly comfortable flying and fighting, plus the way the missions are designed you are eased into the more difficult aspects of gameplay the more you play.  You’ll learn to dive and rebuild stamina so you can pull off dash and roll moves and you’ll learn how to fly through electrical storms to recharge the batteries on your back that power the electric lance.  Oddly enough, they never did teach me about diving down to catch red and blue fish to eat them and replenish my health and stamina; had to figure that out myself and it’s super-useful.  You’ll earn money after each mission that can be spent on upgrades needed for future assignments. 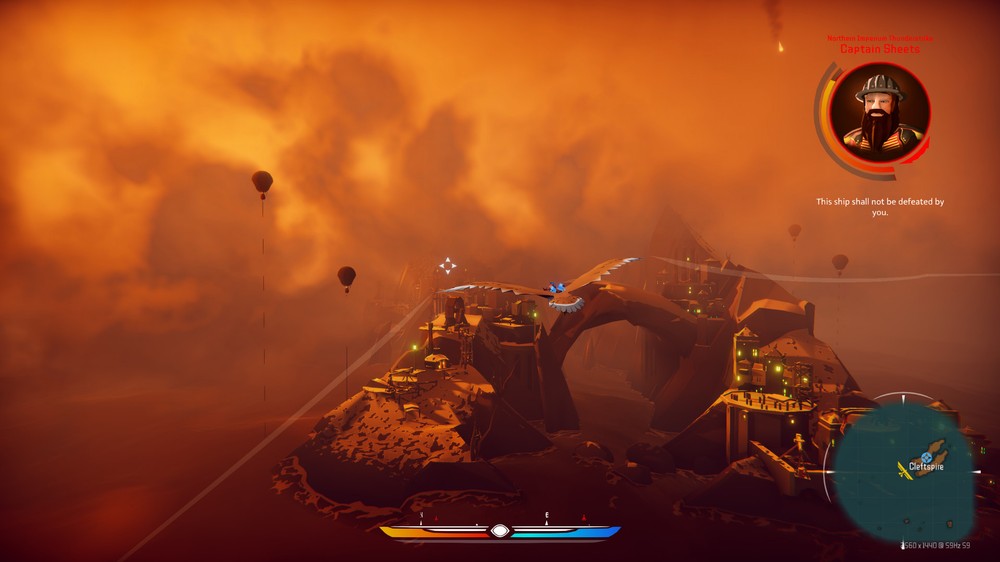 Each chapter offers a home base with multiple NPC’s offering up a variety of missions and challenges as well as an item vendor where you can purchase assorted upgrades for your bird like weapons, armor, and mutagens that will boost your attributes like speed and agility.  There is a nice selection of mission types like patrol, combat, delivery, salvage, bounty, escort, and minesweeping, and sometimes these will combo like one mission where you had to salvage an item then deliver it to another island.  Every chapter has a primary list of missions along with challenges and even races.  The longer missions will often have you traveling with a wingman that you can command with a button press to attack your target.  He’s surprisingly useful and not just a distraction.

Speaking of islands, The Great Ursee is basically one massive body of water with all sorts of islands scattered about; some big enough to build a city and others too small to land.  Opening up the world map was a jaw-dropping experience just seeing the sheer scale of the world and the endless potential for adventures.  A smaller window to this map can be found in the mini-map which also shows your flight path and nearby wind currents.  Tailwinds will boost your speed while waterspouts will send you high into the clouds.  Electrical storms are also shown on the map and useful if you need to recharge during a mission, but don’t overcharge or you will explode.  There are over 60 discoverable locations and activities scattered about the world map, so there is no shortage of things to do between missions, and you are always free to simply take off and explore. 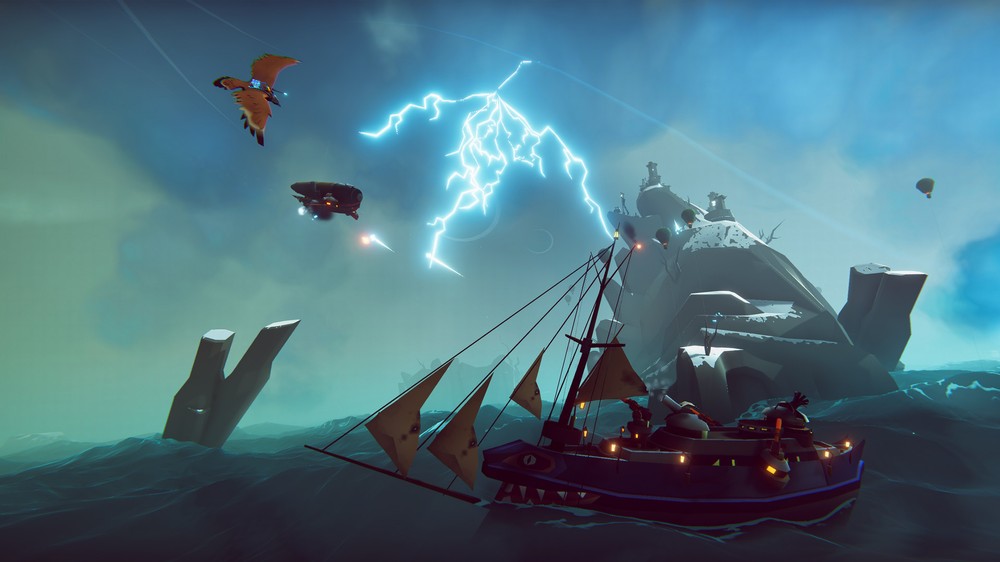 The look and feel of the game is surreal; almost like a 70’s album cover came to life.  The Falconeer isn’t going for photorealism, so the water may look simplified and the polygon count for the rocky islands might be average but that doesn’t matter in this hybrid world of Steampunk pirates and quasi-Vikings all trapped in some ancient mythical universe.  What truly stands out is the color and lighting and how they interact with the clouds and water.  I’d stack these clouds up against Microsoft’s new Flight Simulator game.  There is a day/night cycle with gorgeous shifts in color and light including some breathtaking sunsets and sunrises and when the stars come out at night it’s magical.  The game is loaded with subtle details including some fantastic bird and other creature models, interesting Steampunk airships, and boats, and some unique city designs integrated into what almost looks like procedurally generated landmasses.  Even the air currents are visually represented so you can aim toward them or avoid as needed.  I appreciated the minimal HUD as well as the ability to remove or add back just parts of the interface such as the compass and mini-map.  There is even a Photo Mode if you want to capture and share a moment.

Sadly, my biggest complaint with the game, at least in this current preview build is that it is just too difficult and combat is simplistic and boring.  I was immediately reminded of playing Ace Combat or just about any other flight combat game only in this game you don’t have rockets and sidewinders.  This is pretty much dogfighting, which was always the weakest part of those games and certainly is here too.  You’re constantly trying to aim for the erratic circle lead indicator and if it ever stops long enough for you to get off some shots it also means you are in their sights as well.  At least there is a generous aim assist in place, but even after 30+ missions I never scored higher than a 23% hit percentage. Combat is an endless cycle of circling each other, braking to let them fly through your crosshair, and spiraling away before they shoot back.  Thankfully there is a target camera lock that you can press to keep your enemy in view during these twisty combat maneuvers. You can also target lock ground/water targets, which makes it much easier to fly over and drop bombs or make cool strafing runs.  I’m really hoping they somehow tighten up the combat system or at least expand upon it in some meaningful way.  The Falconeer is so conceptually brilliant in every other facet I hate to see it ruined by tedious and repetitive aerial combat. 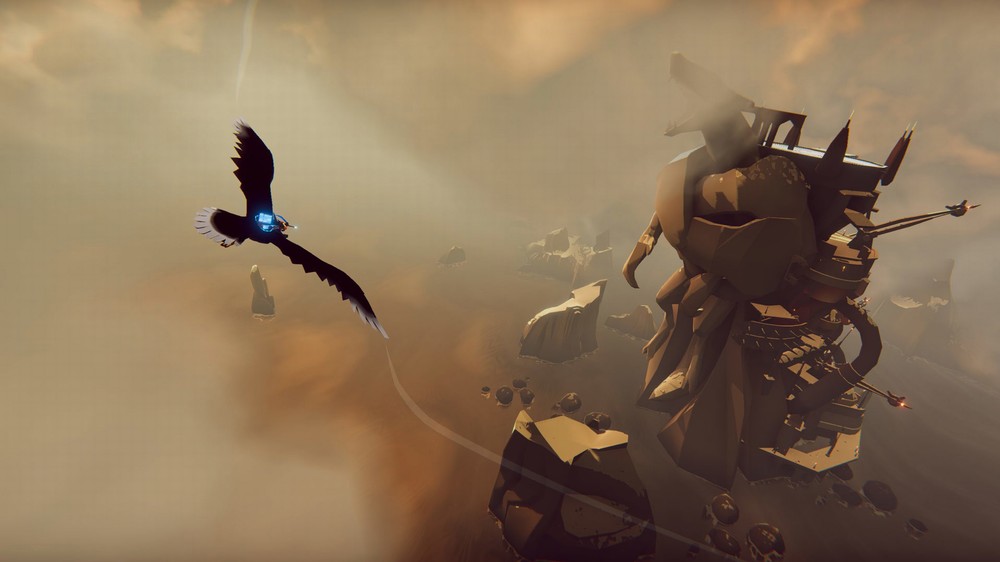 Picking the right bird for the job can help with combat and so can equipping the right cocktail of mutagens to boost those stats.  Obviously HP and the ability to regenerate HP are going to be important.  I’m not sure if the difficulty is going to get balanced better.  As it stands in the current build I had to lower the difficulty to Easy to get past the missions in the first chapter.  There also needs to be mid-mission checkpoints, as some missions are extremely long (20+ minutes) and if you die you start completely over.  The mystical death narration and having to click through missions briefings again is also annoying.

One thing that would be cool is a falcon vision mode that would highlight important objects like schools of fish or the numerous bits of salvage you are supposed to pick up.  I spent nearly ten minutes looking for a bit of salvage I had already located because it was the same color as the water and it was bobbing up and down beneath the surface.  At least let me lock onto the object like an enemy so I have a target to aim for.  Thankfully, the floating mines have flashing lights on them, which is great for me but wouldn’t that defeat their purpose; easy to spot and avoid.

Aside from a few minor nitpicks The Falconeer is shaping up to be one of the more original and challenging games coming out this November.  If you love flight combat games, especially those with an emphasis on dogfighting, then this game definitely has that Red Baron feel to it only now you are flying a giant bird fighting off crazy pirates as you try to rebuild your kingdom in some insanely hostile conditions.  The sheer scale of the world along with the variety of mission designs, activities, and collectibles should keep you flying high until next year.

We’ll be back with a full review of the final game in November. 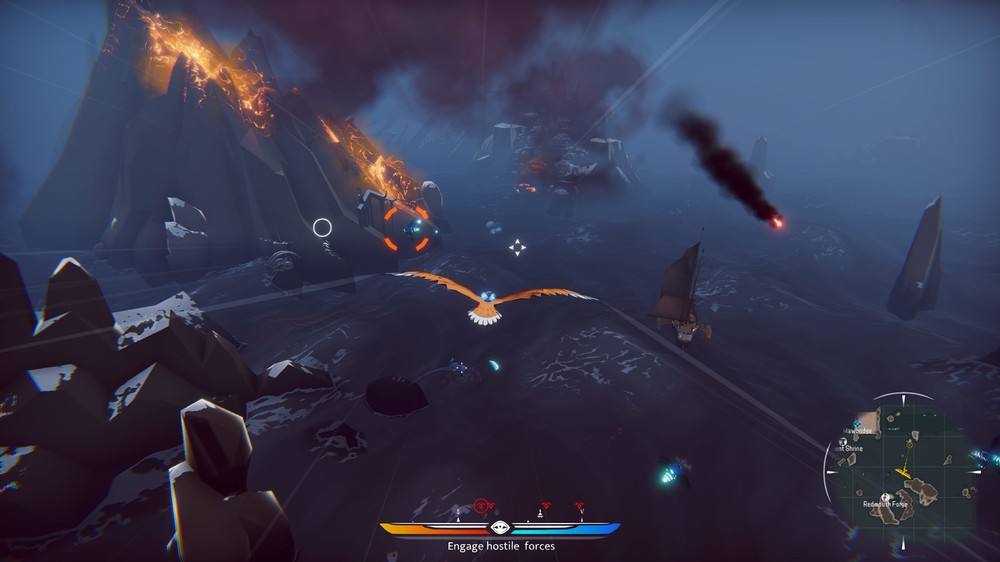 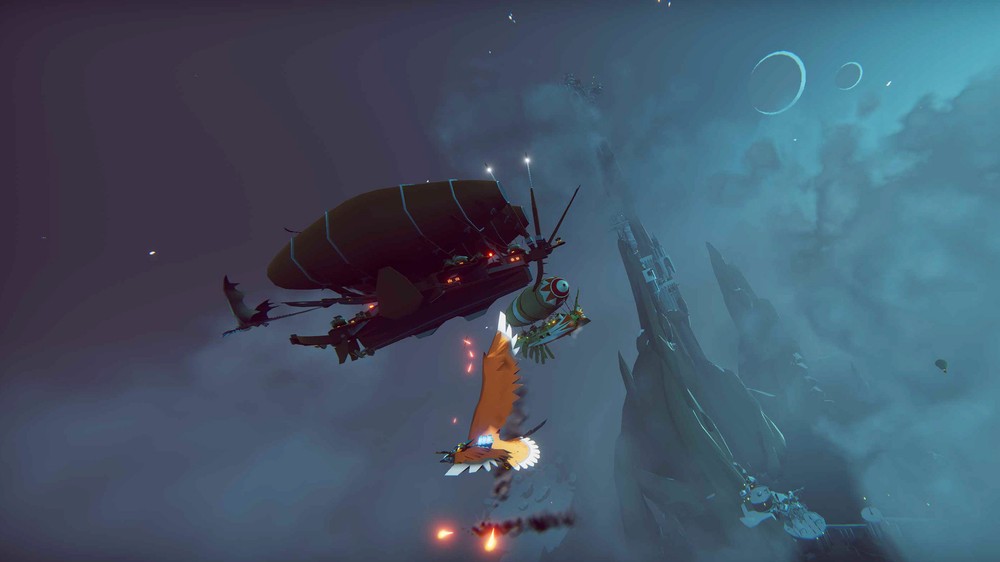 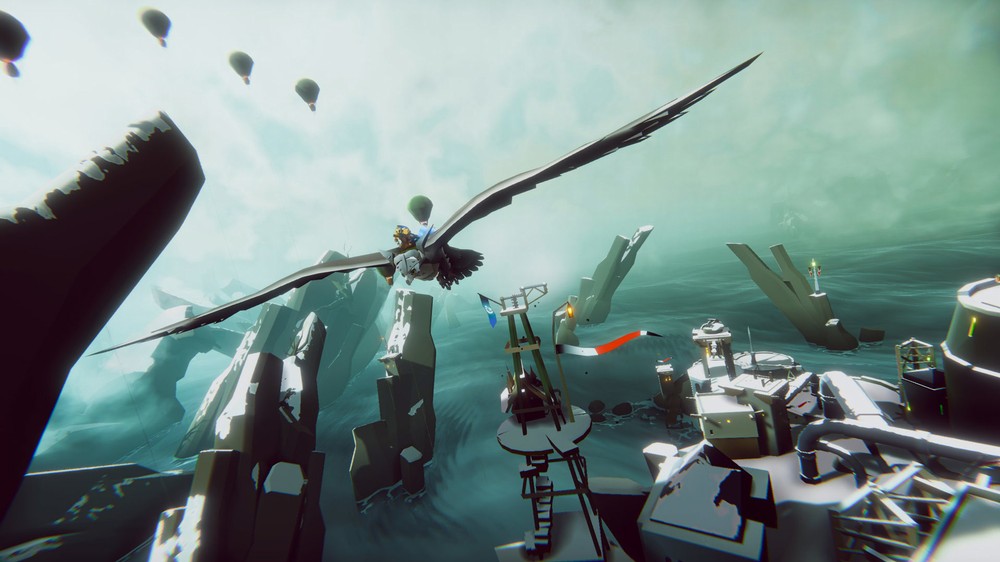 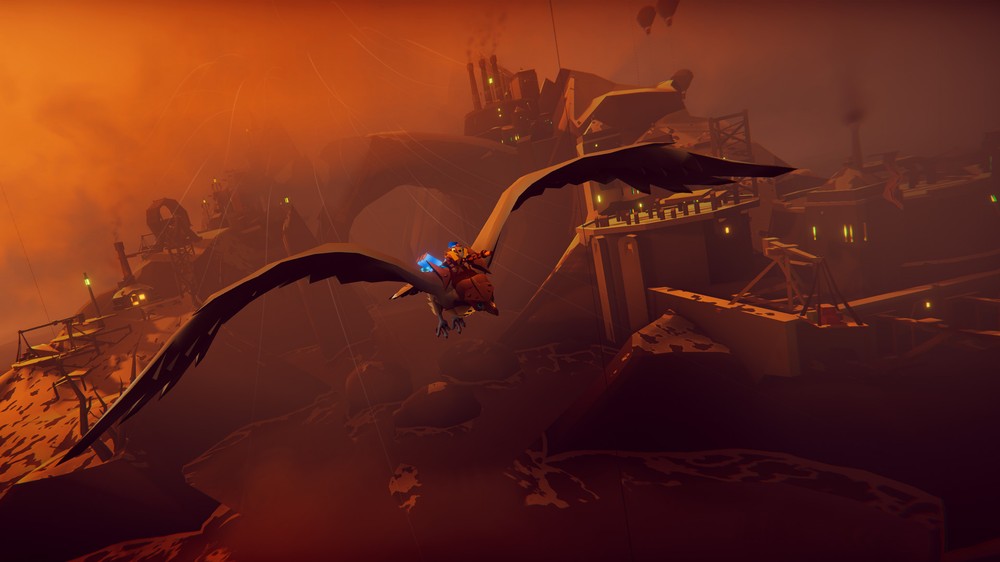 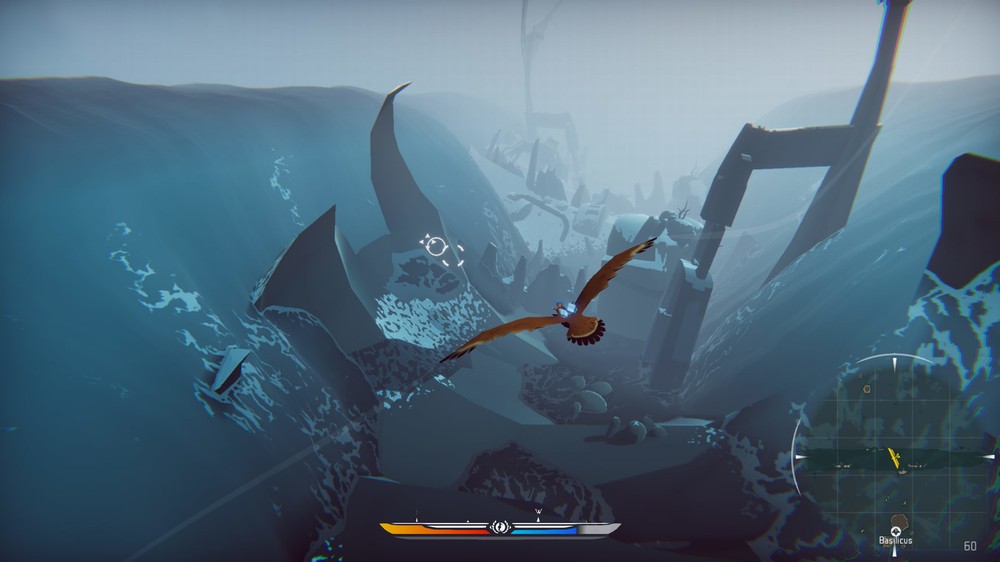 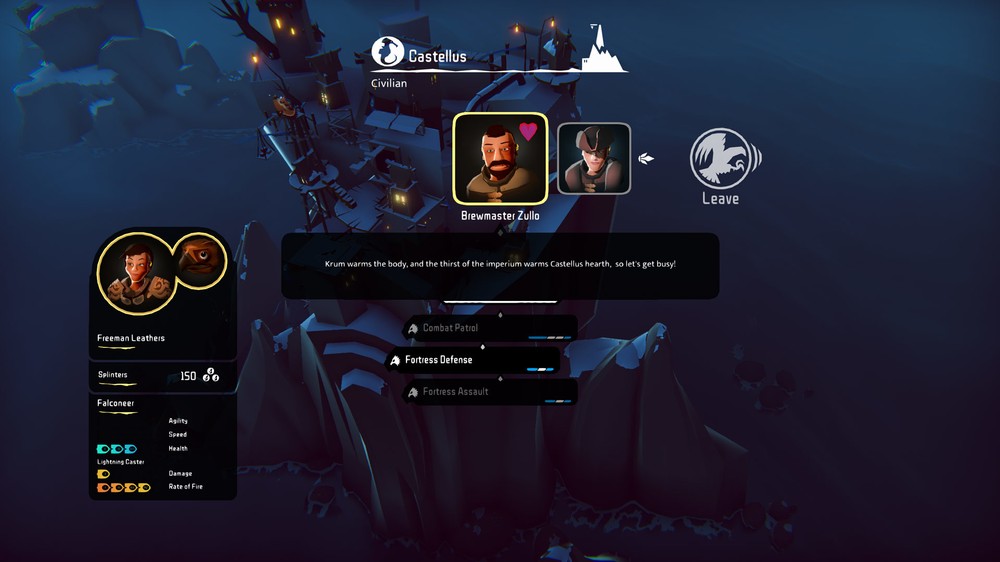 I've been an avid gamer since I stumbled upon ZORK running in my local Radio Shack in 1980. Ten years later I was working for Sierra Online. Since then I've owned nearly every game system and most of the games to go with them. Not sure if 40 years of gaming qualifies me to write reviews, but I do it anyway.
You might also like
Game PreviewsPC