The Coming of the HD Era

The Coming of the HD Era
Written by Cliff O’Neill

With at least two next-generation consoles on the horizon set to take full advantage of the high-definition (HD) format, a basic television will no longer cut it. Sure, both the Xbox 360 and PS3 will display just fine on a regular TV, but it would be like owning a Ferrari and driving it well below the speed limit. To witness all the visual splendor of next-generation games, an HDTV will be an absolute requirement. The time has come to break out the sledgehammer and demolish your crusty old television…or at least unload it.

Understandably, some sentimental gamers may have grown attached to their prehistoric TVs, and not everyone may be completely sold on HDTV. But, seriously, if you’re going to drop a hefty wad of cash on a shiny next-gen console, you ought to get the most out of your investment. An HDTV will ensure that you’ll receive the highest in visual fidelity, not to mention an expanded viewing area.

Microsoft has already stated that ALL games for the Xbox 360 will run in widescreen and support a minimum resolution of 720p, complete with full antialiasing. And since 720p isn’t a widely popular format in a lot of HDTV’s currently on the market, the Xbox 360 will also convert both up and down to accommodate those with only 480p or 1080i monitors.

Sony, meanwhile, boasts that the PS3 will be capable of dishing out 1080p – a format not yet widely adopted among HDTV manufacturers. At that resolution, your eyes will surely blow kisses. However, it remains to be seen whether the frame rate of next-gen games will hold up at such high resolutions. One thing’s certain: Once you experience HD, you’ll have a difficult time settling for less. Anything else would be uncivilized, as they say. 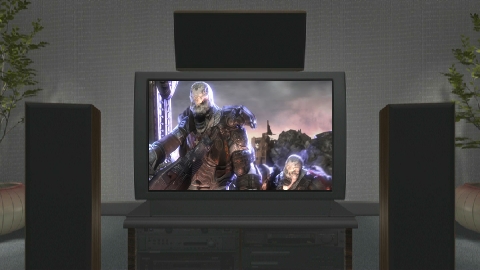 It’s not all about dazzling eye candy, though. The sharp, crystal-clear video and greater screen real estate of a 16:9 HDTV will provide a more immersive gameplay experience. You’ll see more of the game world and clearly be able to spot ultra-fine detail, such as a character’s pores (assuming someone takes the time to render them). Think of it as seeing the game the way its developer originally intended.

Gamers stuck with standard televisions won’t be quite so fortunate. In fact, HDTV-less gamers may actually be at a disadvantage when playing certain types of games. As an example, Dead or Alive Xtreme Beach Volleyball on the Xbox, though not a true high-definition game, displays more of the court in widescreen mode, making it much easier to follow the action.

That’s a small example, but one that demonstrates how something even as basic as a volleyball match can benefit from an extended picture. Now just imagine how much an intense shooter, rowdy sports title, or exhilarating racing game can gain from full-blown HD. Or, if you prefer, simply fantasize about seeing the lovely DOA gals parading around in mesmerizing high definition. Yowza!

So, what will be some of the drawbacks of such heavenly imagery? For one, game makers will need to devote additional resources to development when the next-gen consoles usher in HD as a standard. This potentially means longer development schedules and higher costs (resulting from all the fancy high-end equipment that’s necessary), which gamers will likely bear the brunt of. It also means smaller developers, particularly those that specialize in creating budget titles, could be left in the cold.

Another issue concerns the small amount of room that exists for graphical insufficiencies. Since HD will magnify the slightest imperfection tenfold, a rough texture or misshapen polygon will stick out like Rosie O’Donnell in Playboy. Just look at the Xbox version of Enter the Matrix. One of the few current-generation games to feature 1080i, the game actually looks worse in HD because its graphical shortcomings are all the more glaring at the higher resolution.

As mentioned earlier, performance issues could arise as well, despite the incredible raw power of the next-generation consoles. Even skilled developers will probably need to make some compromises to next-gen graphics – like keeping a limit on the number of particle effects or characters that fill the screen – in order to prevent the action from bogging down at HD resolutions.

At the end of the day, though, that’s a relatively small price to pay when you consider the next-generation consoles already promise graphics several times greater than those of the current generation. The HD factor – or “era,” as Microsoft keenly refers to it – will just intensify the leap in graphics. But it’s a leap that only those with HDTVs will fully appreciate.