The Bugs are Back! Earth Defense Force 2025 Releases Today 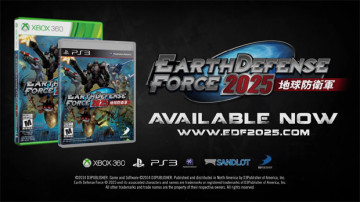 Just when you thought the battle was over, the mayhem continues in Earth Defense Force 2025, now available in North America from D3Publisher (D3P) for the Xbox 360 games and entertainment system from Microsoft and PlayStation®3 computer entertainment system for the suggested retail price of $49.95. The first of three mission packs (Special Ops Mission Pack) is also available starting today as downloadable content (DLC) for $2.99. Players can earn this mission pack for free (through February 24th) by visiting the Earth Defense Force (EDF) Facebook page and taking part in sharing a special EDF newscast (details here – www.facebook.com/EarthDefenseForce).

Earth Defense Force 2025 is the long awaited return in the Earth Defense Force series from beloved Japanese developer Sandlot. The insects return from dormancy to disturb the peace with over-the-top action and massive city-leveling explosions that will entrench the EDF and the citizens of earth into a state of emergency. Earth Defense Force 2025 is an action shooting bonanza that arms players as an EDF soldier equipped with 700+ weapons, four new soldier classes and the training to exterminate insects of all sizes in the global quest to protect the world from alien invasion. Featuring the largest number of missions from the series and including a versus mode and four-player online multiplayer, Earth Defense Force 2025 is an all-out battle against the terrifying Ravagers that have come back stronger than ever in their mission to destroy the planet.

“Not much is more satisfying in games than letting out a little steam and saving the planet from the infestation of insects that has returned bigger than ever in Earth Defense Force 2025,” said Peter Andrew, vice president of production, D3P. “Nearly everything is completely destructible and players can start each battle fully equipped the way they wish that surely will create countless hours of fun for all.”

For gamers playing on Xbox 360 who want to represent the EDF to the fullest, please visit the Xbox Live Dashboard to download a variety of EDF themed avatars and weapons packs, including EDF tees, a dragon pet, a Fencer and Wing Diver costume, in-game weapons (weapons also available on PlayStation 3), and more (prices range from free – $3). Earth Defense Force 2025 is rated “M” (Mature – Blood and Violence) by the ESRB. For more information on Earth Defense Force 2025, please visit www.EDF2025.com and check out the latest EDF launch trailer right now: