The Book of Unwritten Tales 2 Now Available on Wii U 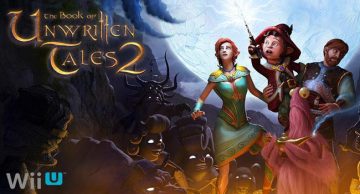 The Book of Unwritten Tales 2, the critically acclaimed sequel to the popular point-and-click adventures from Bremen developers King Art Games, has now been released on Wii U.

About The Book of Unwritten Tales 2

In The Book of Unwritten Tales 2 the player controls four different characters in a lovingly created fantasy world, and must solve some tricky logic puzzles in classic point-and-click style. The thrilling story and the usual BoUT humor with its numerous nods to fantasy elements and colorful characters guarantee over 20 hours of fun gameplay.

The Book of Unwritten Tales 2 is now available for Wii U in retail outlets and the Nintendo eShop for EUR/USD $19.99.

I've been an avid gamer since I stumbled upon ZORK running in my local Radio Shack in 1980. Ten years later I was working for Sierra Online. Since then I've owned nearly every game system and most of the games to go with them. Not sure if 40 years of gaming qualifies me to write reviews, but I do it anyway.
You might also like
Gaming NewsWii U