By now, anyone with the technology to be reading this article is well aware of the tragic events that transpired on September 11, 2001. With all of the media still focusing on those events, what you may have missed is the plethora of movie studios and game manufacturers rushing to modify or delay their upcoming works in some sort of needless attempt to shelter the public from painful memories of the World Trade Center.

Movies studios immediately delayed movies dealing with terrorists and the Spider-Man website was shutdown, trailers were pulled from websites, theaters, and even a totally separate DVD was recalled to remove the Spider-Man trailer from the discs. But the “madness” doesn’t stop there.

The game industry followed suit by postponing many games currently in production and some even nearing their release date. Electronic Arts shutdown their Majestic server – an online game that doesn’t even deal with terrorism; only government conspiracy. Rogue Spear: Black Thorn, the latest in the series of anti-terrorist games from Red Storm has been postponed indefinitely, and there are rumors of possible delays as Konami determines whether to modify their upcoming Metal Gear Solid 2 that takes place in NYC and also involves terrorists.

One has to wonder if these changes are necessary or even healthy. One of the first things I did after watching news for about 24 hours was to load up Soldier of Fortune and start blasting terrorists to bits. It was a great outlet for anger and frustration. Considering the recent rise of hate crimes towards people who happen to share the same origin as the terrorists, I would think that computer games would be therapeutic if nothing else.

Some game designers are recalling games to make cosmetic changes that deal specifically with the World Trade Center. Flight Simulator 2002 is currently being edited so the towers are no longer present, and the aforementioned Spider-Man movie was also being released as a PSX game, which is now delayed as the designers try to figure out what to do.

Traditionally, games have always featured terrorists as the “bad guys” (unless you are playing opposing teams in a multiplayer game), and they tested your skills in saving innocent hostages while eliminating the enemy. No matter how we perceive these games, the designers and publishers are now walking a thin line of trying to market a potentially offensive game in a volatile market and many are taking the safe path and simply backing away slowly and quietly.

Will there ever be a time in America’s future when companies will feel confident in releasing a violent game with terrorist themes. Probably. After all, look at how many simulations there are that let you recreate the events of Pearl Harbor and other famous historic battles. Hopefully it won’t be 60 years before we can wage our own personal war on terrorism on our PC. 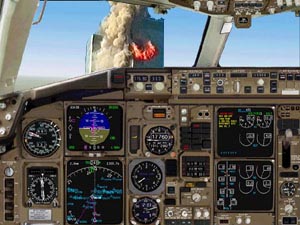 While it is evident that many of our games are copying modern day events and trends in global conditions including terrorist activities, it is hard to believe that terrorists are using our games as training tools. I find it ludicrous that they are even attempting to blame computer games for the events of last week. The claims that the terrorists practiced crashing into the towers using Microsoft Flight Simulator whether true or untrue have no bearing on this case, yet they have already caused some UK stores to pull the sim from the shelves. Even unrelated games like City Crisis have been pulled from some shelves and that is a heroic search and rescue style game.

A few months ago I wrote an article about violent games and their perceived effect on today’s youth (Adult Games for Adult Gamers). Blaming a flight simulator is as valid as blaming your high school’s drivers ed teacher when a kid runs over someone in a car. When people want the knowledge they will get it, and you can’t blame the source. If fanatical senators want to blame games for all of societies woes then they have only breached the surface. They had better start blaming movies, TV’s, books, and just about anything else that can give a person an “idea”. After all, that is what terrorism is; an idea or philosophy that is believed in so strongly it promotes irrational actions.

America will recover and our people will become stronger from these events. We can only hope that the entertainment industry will fare as well. With each occurrence of censorship, delay, or cancellation of any game, movie, TV show, or book, we only emphasize the impact of the terrorist attack and give their victory more power over us as they slowly eliminate our personal freedoms no matter how insignificant they seem to be.