Telltale Publishing today announced that the hit survival horde crafting game 7 Days to Die will release on PlayStation 4 and Xbox One for the first time on June 28th as both a digital and retail product in North America, and digitally in Europe; and will be available on July 1st for the first time at retail in Europe. The recommended retail price is $29.99 USD or equivalent, and the game is currently available for pre-order at GameStop, Best Buy, GAME, and Amazon. 7 Days to Die is published in collaboration with the Dallas-based independent developer, The Fun Pimps.

Set in a brutally unforgiving post-apocalyptic world overrun by the undead, 7 Days to Die is an open-world survival game that is a unique combination of first person shooter, survival horror, tower defense, and role-playing games. It presents combat, crafting, looting, mining, exploration, and character growth, in a way that has seen a rapturous response from fans worldwide, generating hundreds of thousands of hours of community content on YouTube and other streaming video platforms. 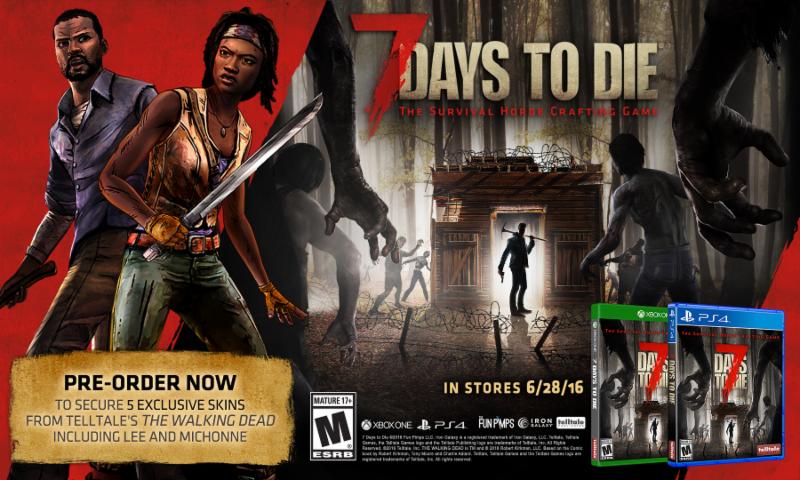 Fans of Telltale’s The Walking Dead series in partnership with Skybound will be excited to learn that pre-ordering 7 Days to Die will give them exclusive access to 5 character skins from Telltale’s hit series, including Michonne and Lee Everett.

This new interview with 7 Days to Die developers gives insight into what inspired the immensely popular “survival horde crafting game” , as well as what players can expect in the console version.

7 Days to Die is rated is rated ‘M’ (Mature) for Blood and Gore, Strong Language, and Violence by the ESRB. The game is published by Telltale Publishing in partnership with The Fun Pimps.

7 Days to Die is currently available for Windows, Mac OS X, and SteamOS and Linux in Early Access on the Steam platform.

I've been an avid gamer since I stumbled upon ZORK running in my local Radio Shack in 1980. Ten years later I was working for Sierra Online. Since then I've owned nearly every game system and most of the games to go with them. Not sure if 40 years of gaming qualifies me to write reviews, but I do it anyway.
You might also like
Developer CoverageDeveloper DiariesGaming NewsPlayStation 4