Take to the Skies! Air Conflicts: Vietnam Is Out Today for PC, Xbox 360 and PlayStation3 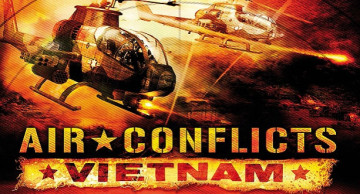 Are you ready to enter the cockpit and throw yourself into battle across the deadly skies of Vietnam? Well it’s time to do your duty, as Air Conflicts: Vietnam launches today for retail in North America and Canada. Experience the explosive conflict of Vietnam by piloting more than 20 incredible fighter jets and helicopters, destroying enemy artillery and guiding your squadron to victory.  With an extensive storyline and multiplayer gameplay modes, Air Conflicts: Vietnam will keep armchair fighter jocks glued to their seats on console and PC.

Air Conflicts: Vietnam is an arcade-styled air-combat game that immerses players in the harrowing skies over Vietnam. Take to the air in screaming fighter jets or grab the controls of devastating helicopter gunships as you shatter enemy encampments with explosive ordinance, decimate North Vietnamese ace fighter squadrons, escort bombers as they deliver their deadly payload, or rescue stranded soldiers and deliver support troops to the ever-changing front lines of the vicious battlefield.

View the trailers below for a look at the fearsome combat aircraft you’ll encounter in the game and see how they tear up the skies in action-packed flight combat.