The lovely folks over at independent studio, Worm Animation, today announced that their debut title, point and click adventure music game—Beat The Game—is coming to Xbox One, PC, Mac and Linux this summer. Beat The Game combines beautiful, handcrafted characters and environments with classic 3D point and click adventuring, while adding an intuitive music making mechanic. Inspired as much by twentieth century surrealists, Dali and Ernst, as modern European techno, Beat The Game is a charming adventure game with a heart made of music.

“Beat The Game is a love letter to my passions in life,” said Cemre Ozkurt, founder of Worm Animation. “Charming characters, sci-fi fantasy, European art and, of course, electronic music. We’ve put a huge amount of the work into giving the game a totally unique personality. And with the music making element, we can’t wait for players to flex their compositional muscles to create their own unique soundtracks.”

With a background in beautifully crafted film animation, Worm Animation takes players on a journey with Mistik, the hero of Beat The Game, to uncover the mysterious, abstract universe he finds himself in after a motorbike crash. Mistik, though, is no ordinary hero—he’s a music producer. With the help of his trusty recorder, Mistik must collect the samples scattered around Beat The Game’s beautiful, dream-like environments in order to create the ultimate track. Esteemed house and techno producer, Marc Houle, is scoring the soundtrack, ensuring the player is always capable of crafting their very own club thumper. 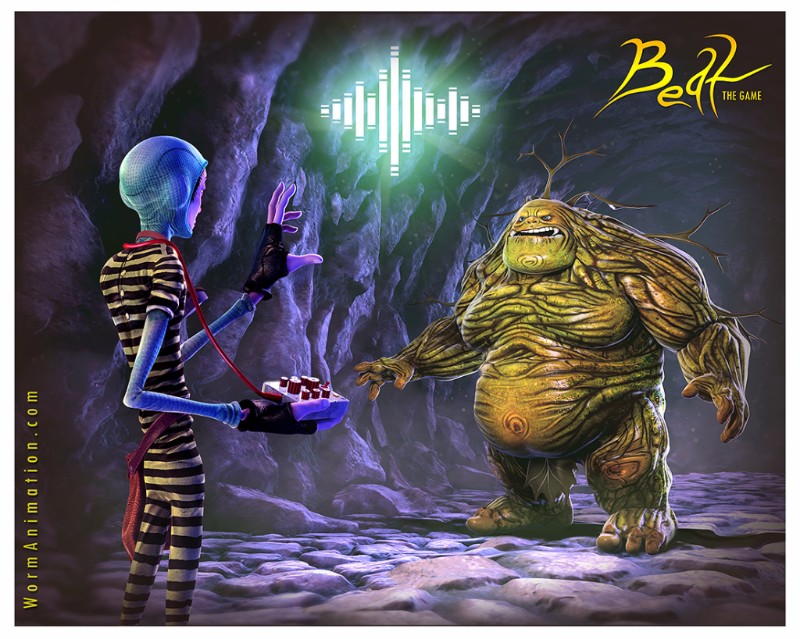 From discarded drum sticks to the clang of a stone on metal, Beat The Game’s environments are littered with an array of sounds and colorful characters. As you explore a hazy, surreal world, discovering interesting sounds, you gradually build up a library of samples. Crack open your sequencer and the audio of the game comes to life, allowing you to use your samples in any combination you like. From mellow, dusty rollers, to upbeat, acid house, Beat The Game’s intuitive sequencer ensures every combination sounds good—it’s just a case of creating something that fits your mood. With a cast of warm, funny characters and a visual style that draws on classic animation, Beat The Game feels timeless, a journey about the joy of creating music.