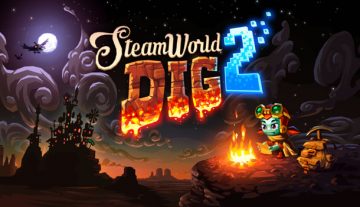 Videogame publisher Rising Star Games, in collaboration with critically-acclaimed developer Image & Form, announced today that the smash-hit title SteamWorld Dig 2 is soon to be available for the Nintendo Switch™ and PlayStation®4 computer entertainment system as a physical retail release. The boxed editions will feature an exclusive double-sided poster featuring iconic artwork from the game along with a reversible inlay with never-before-seen artwork. SteamWorld Dig 2 is currently scheduled for release at selected retailers in the USA, across Europe and beyond in Spring 2018.

“We’re totally humbled by the community’s reaction to SteamWorld Dig 2”, said Brjann Sigurgeirsson, CEO at Image & Form. “This latest SteamWorld adventure is a milestone, and we’re naturally very proud of it. Many fans are now asking for a physical release, so it makes me very happy to be able to partner up with Rising Star Games for a boxed version. We’re also excited that additional exclusive items will be included as well!”

SteamWorld Dig 2 takes players on a platform mining adventure forged in Metroidvania flames. When an old trading town is struck by mysterious earthquakes, it’s up to a lone steambot and her unlikely companion to uncover what trembling terrors lie beneath.

SteamWorld Dig 2 for the Nintendo Switch™ and PlayStation®4 system, developed by Image & Form and published at physical retail by Rising Star Games, will be available at selected retailers in the USA, across Europe and beyond in Spring 2018. For more information follow Rising Star Games on Instagram, Twitter, Facebook, or visit the official Rising Star Games website.

I've been an avid gamer since I stumbled upon ZORK running in my local Radio Shack in 1980. Ten years later I was working for Sierra Online. Since then I've owned nearly every game system and most of the games to go with them. Not sure if 40 years of gaming qualifies me to write reviews, but I do it anyway.
You might also like
Gaming NewsPlayStation 4Switch