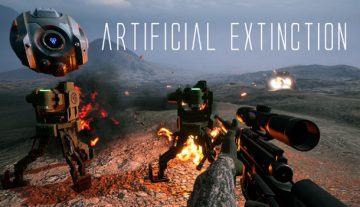 Solo developer Chris Dawson of 100Hr Games is proud to announce that his first commercial title, Artificial Extinction, is landing on Steam today. Take on an army of autonomous weaponized robots as you try to secure a new home for your family after the Earth has been conquered by a murderous AI. Set-up a network of high powered sentry guns to defend yourself from waves of mechanized monstrosities, who will increase in number and difficulty as the levels go on.

Artificial Extinction is unique because it’s a Sentry Defense game involving Real Time Strategy elements played from the First Person point of view. The story is very relevant to today’s topics of the race to invent Artificial Intelligence, LAWS, the AI Murder Policy debate, and the military’s implementation of robotics and drones on today’s battlefield.

Set in the future, you have 9 days to find a safe place on the planet. At the beginning of the day, the ship will drop you off on the planet and then orbit above you where it is safe. You have to set-up a miner to collect fuel for the ship but hostile robots will advance towards you. You have Sentry Weapons that you set-up around you to provide protection while the miner is collecting fuel. Once enough fuel is collected, your ship will descend to pick you up and you’ll continue your journey looking for a safer place on the planet.

This game is about survival, battlefield tactics, strategy, evolving technology, and resource management. The story is relevant and important to consider, all played with the immersion of a first person shooter.

Artificial Extinction is available now for Windows PC via Steam for $19.99 USD.