Surviving the mystical rigors of virtual domesticity in The Sims: Online 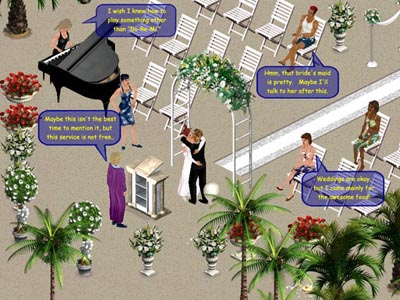 Don’t ask me how it happened.

With the pixelated pinache of an EverQuest maestro who has overseen perhaps one to many nuptials, the reverend standing in front of me waved his hand in a broad arc as the gentle words flowed forth from his dialogue box and descended upon the crowd with austere finality.

“Does anyone here wish object to the union of Stretch and Maya? Speak now or forever hold your peace.”

The guests in attendance remained silent, each one, a bartender named Bubba, a woman sporting purple hair and a thong bikini, and a cluster of palm trees chose to bear silent witness as the curtain began to close on this virtual wedding ceremony. “Then by the power invested in me by the great state of Simantia and my AOL broadband connection, I hereby pronounce you man and wife. You may kiss the bride.”

And with those brief words I was now officially married in the world of The Sims: Online. The reverend, Leet_priest103, congratulated us and wished my newfound spouse and I a happy and joyous life together, and “Oh, would you give me those 200 simoleans you promised me now? I’ve got some debts and you know…”

In response I rolled my mouse wheel upward, fully expecting a rocket launcher, MP5 or some other dealer of destruction to materialize and rid me of this troublesome Sim-Citizen. Alas, no such thing happened. Bereft of weapons, I realized that this was not Quake III, nor Counter-Strike, it was something completely and utterly different, a place where bunny hopping, camping, and ‘haxor’ speak had no place. An alternate universe? A parallel dimension? I suddenly realized that in order to maneuver my way in this strange new world, I would be required to talk rather than shoot. I turned back to Leet_priest103.

“Well, um, you see Leet, the thing about those simoleans is…” I politely demurred, saying that I intended to save my hard earned currency for the honeymoon. The reverend was aghast. 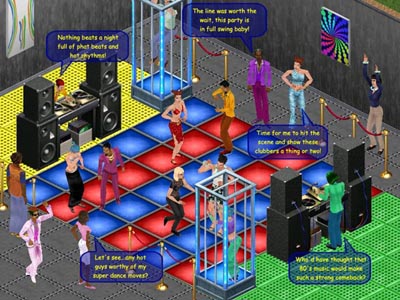 The post-wedding reception was underway. The girl with the purple hair was nowhere to be seen and Bubba the bartender commenced walking up and down the aisle repeatedly, shouting ‘Spank her! Spank her!” Our esteemed reverend, Leet_priest103, having been denied his monetary compensation commenced to remove his shirt (courtesy of his adult sim patch) and gyrate in rhythm to his chanting of, ‘Pay sucka, You Pay now!’ I recommended that he see Bubba for payment. The palm trees seemed to look on with scorn.

And thus my induction into sim-matrimony was concluded, a motley blend of eccentric reality intermixed with the deceptively mundane.

Okay, here’s how it happened.

Being a veteran of first person shooter (FPS) action titles since the original Wolfenstein, I’ve always been hard put to allow ‘slow-moving’ titles into my playlist, despite their popularity and success. Nevertheless when I was approached to give EA Games The Sims: Online a spin on my hard drive, I acquiesced, if only out of curiosity about the one game that has managed to turn ordinary, everyday life into an exciting and addicting gameplay experience for millions. After all, going against the grain is never easy, and eschewing the violence, murder and mayhem that serves as the driving influence for nearly every successful game vehicle today takes boldness and vision. And what a vision it’s been.

In 1989 Will Wright, publishing through Maxis games, released his original classic Sim City, a game in which the player had access to his own city replete with virtual inhabitants, to build or destroy as he pleased. The entire Sim City series sold over seven million units and when Will Wright teamed up with Maxis again to release The Sims, it soared to the top of the charts, spawning a legion of devoted fans and over six (6) successful expansion packs, with more on the way.

Building upon the foundation laid by The Sims, Wright took the concept of The Sims to the next level, creating The Sims: Online, an Internet based game where Sim-Citizens throughout the world now have the chance to interact with one another as they build their virtual lives ala The Sims. Lured in by the aura of The Sims success, I dared to put aside the trusty tools of the FPS gamer and delve into the mystical intricacies of The Sims: Online.

So that’s how it happened.

When I entered the world of The Sims: Online I deliberately chose the vocation of unemployed musician, simply because I found it galling that an online game would encourage me to simulate in my spare time what I already do during my waking hours. Work? Hah. Let the proletariat sims slave away for their petty bourgeoisie simoleans, I alone would rise above the system, scoffing at supply and demand, ignoring the bull and bear and ridiculing the concept of capitalism through a scathing repertoire of song.

But how to accomplish such a feat? As it turns out, nobody is forced to work in The Sims: Online, you are free to live out a couch potato lifestyle of hillbilly abandon and license if you so please. But The Sims: Online doesn’t reward stagnation – in order to live the hypocritical hippy life in the manner to which I was accustomed, I would have to devise some way of raking in the sim-dough without actually having to lift a finger. Like many a blonde bimbo who has just made the acquaintance of a rich yet ailing oil baron, the answer came to me in a brilliant flash of inspiration: marriage. What better way to fund my virtual bohemian lifestyle than a rich sim-stress with simoleans to burn?

Back at the altar, my bride Maya and I were content to let the postnuptial festivities continue as they were. As we exited the wedding area my last sight was of Bubba and our shirtless reverend getting into a tussle over how many simoleans he owed him. Once we arrived at our house (actually her house, I hadn’t bothered to furnish my own hovel since entering the game world; I was a musician after all) we turned to the tasks of domestic bliss, chief of which, I soon discovered, was the rapid and constant accumulation of money, or simoleans as it were.

Now the bonds of affection that united Maya and I were quite strong, and one can imagine the surprise I felt when, after twenty long minutes spent in courtship convincing her to marry me and five (long) minutes spent on the wedding ceremony, I was summarily ordered to get to work. “You’ve got to get a job,” said Maya. “I’m a musician,” I retorted, “Art is my job, life my canvas.”

“Has anyone paid you to play gigs?”

“I’m not yet appreciated in my time.”

Maya, nonplussed, said, “Didn’t you say you had a ton of Simoleans?”

Reminded of my little fib, originally contrived to get Maya to the altar, I attempted to divert the dangerous course our conversation had taken by directing my newlywed darling to the more comforting aspects of our domicile. “Maya honey, be a dear and fetch me my slippers, I’m exhausted after the ceremony. I think I’ll relax on the couch and watch the tube for a while.”

“Okay fine, but seriously don’t you have a lot of Simoleans? I could really use some right now, there’s some additions I wanted to put on the house, I also wanted to go shopping for some clothes to outfit my Sim, oh, also a puppy would be nice…”

I closed my eyes and stopped reading her text, hoping for a brief respite from her yammering, but when I reopened them my blushing bride was still there, still querying me about my fictional Simolean fortune. “…After all,” she ended, “That’s pretty much the reason you’re here…” 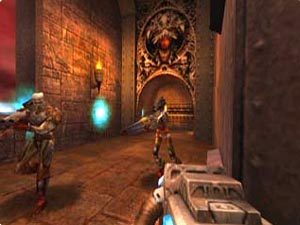 Could it be? Were my eyes and ears deceiving me? My wife demanding I get a job, wanting me to finance her shopping trips, money requests, house additions… and a puppy? Hmmm, the whiff of reality that flared in my nostrils proved highly un-aromatic. I decided to take a break. Minimizing The Sims: Online window I went online for a quick Capture the Flag match on my favorite Quake III server. I happily fragged for a few minutes, but when I returned my darling wife was still talking. “Are you still there?” said Maya.

“Hello? Why aren’t you answering me?” she queried again, this time in bold caps.

I excused my absence, saying that I had been out with the guys for a little Quake III fun.

“Those violent games are horrible. What on earth were you thinking? I heard that John Carmack listens to Led Zepplin LP’s backwards.”

I protested my innocence. “But I was only gone for a few minutes.”

Maya said, “Look, you’re in a Sim-Marriage now, you have responsibilities. You can’t just go Alt-Tabbing out of our relationship whenever you feel like it.”

Ugh. This household scenario, along with my darling wife’s intentions, was starting to eerily resemble its real life counterpart with an accuracy only Rod Steiger could chronicle, and I decided that it was time to introduce some levity into my virtual wedding nest. “Wait here darling, I’ve got a wedding gift for you.”

Five minutes later I returned to Maya’s house with two guests in tow, Bob, an Alien with aqua skin and bulbous black eyes, and our dear friend Leet_priest103, lured back with profuse apologies and promises of an even bigger simloean score.

We entered. Maya was in the shower. We walked into the loo area while I made our introductions. “Maya dear, this is Bob. He’s an alien. Oh, and he’s also agreed to be your new husband, isn’t that so Mr. Leet? My priestly friend, still without his shirt, said, “Amen brother, I now pronounce you extra terrestrial and wife.”

“Bob is looking forward to briefing you on the intergalactic code of conduct as it relates to interspecies mating rituals. Isn’t that so Bob?”

Maya started to protest, but I beat a hasty exit, saying, “Oh and Maya dear, do be a doll and pay Leet those simoleans we promised him. Ta-Ta.”

And with that my sim-marriage came to an end, propitiously hijacked by a shirtless reverend and Bob the alien.

So here’s how its gonna go.

My brief marital interlude in the Sims Online proved to me once again that much like real life, we can find the extraordinary and delightful in even the simplest of things. For the Sims, the unpredictable lies in the human element of predictability, and for many gamers, this is enough to ensure that the world of The Sims: Online will be around for a long time to come. Players who’ve missed the lighter side of online life would do well to hang up their rifles for a few nights and give this game a try.

Oh, and if there’s anything I learned from my romantic escapades online, its that sometimes dealing death and destruction with a rocket launcher and BFG can be much safer than trifling with the mores of female ambition, which, online or off, are never wise to underestimate.

Now, where are those nazi-zombies?