SETH ROGEN AND ZAC EFRON STAR IN THE #1 COMEDY BLOCKBUSTER 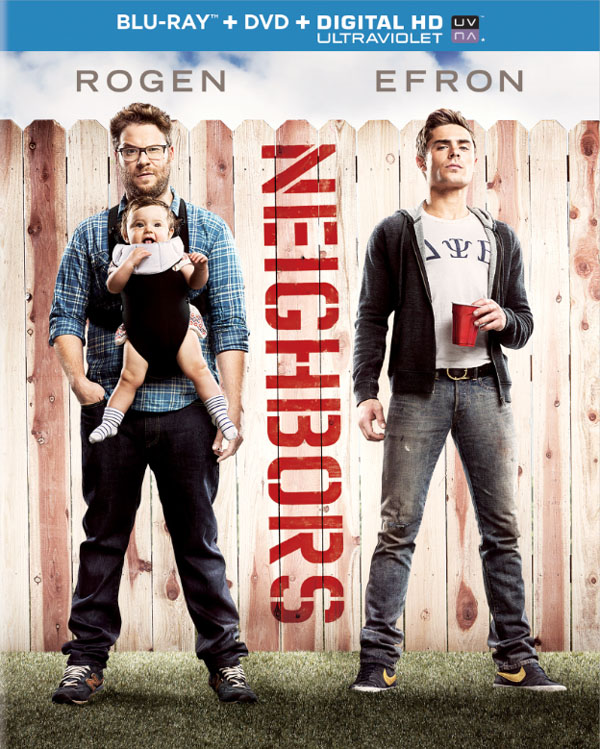 WITH AN EPIC ALTERNATE OPENING GUARANTEED TO BRING NEW LAUGHS

Good fences aren’t nearly enough to keep things neighborly when a non-stop rager breaks out in the suburbs next door to sleep-deprived new parents in the comedy blockbuster, Neighbors, available on DIGITAL HD August 12, 2014 from Universal Studios Home Entertainment.  The outrageously funny comedy will arrive on Blu-ray™ Combo Pack including Blu-ray™, DVD, Digital HD with UltraViolet™ and On Demand September 23, 2014.  Both the Digital HD and Blu-ray™ include a never-before-seen uproarious Alternate Opening that Yahoo! Movies’ Kevin Polowy hails as “explosively funny.”  The Alternate Opening reveals just how the boys of Delta Psi Beta came to suburbia.  The Neighbors Blu-ray™ Combo Pack will also include additional bonus features including a Gag Reel, Line-O-Rama, Behind The Scenes interviews and more.

Director Nicholas Stoller (Get Him to the Greek, Forgetting Sarah Marshall) breaks out the bros, booze, and babes in an over-the-top laugh-fest critics have praised as “hilariously funny from beginning to end” (ComingSoon.net).  Seth Rogen (This Is The End, 50/50), Zac Efron (The Lucky One, That Awkward Moment) and Rose Byrne (Bridesmaids, the Insidious series) star in a comedy about a young couple suffering from arrested development who are forced to live next to a fraternity house after the birth of their newborn baby. High-octane antics are also supplied by a supporting cast that includes comedy all-stars Dave Franco (21 Jump Street, Now You See Me), Christopher Mintz-Plasse (This Is the End, Superbad), Jerrod Carmichael (“The Goodwin Games,” upcoming Untitled Jerrod Carmichael Project) and Craig Roberts (Submarine, Jane Eyre) in a movie hailed by critics as “this generation’s Animal House” (Aint It Cool News).   The Blu-ray™ Combo Pack includes a Blu-ray™, DVD and DIGITAL HD with UltraViolet™.

Check out the trailer and preorder your copy today