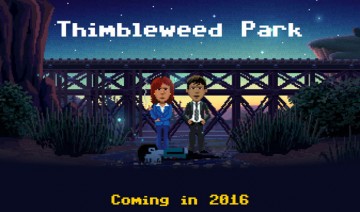 When Special Agent Ray arrived in Thimbleweed Park, she immediately had doubts the dead body in the river would suit her needs. Stuck in the past, the small, strange town stunk of a desperate longing to be what it once was. And yet, as Agent Ray is about to discover, Thimbleweed Park is a dangerous, mysterious, and unexpected place with much more to hide than a bloated, pixelated corpse — a victim of death come too soon.

From the offbeat brains of Ron Gilbert and Gary Winnick — creators of the LucasArts classic Maniac Mansion — comes Thimbleweed Park, an indie adventure game with all the charm of the golden age and none of the stupidity. Dead ends? Ha! Ridiculous puzzles? Not in this town. Leave those rose-colored glasses at home, because you sure as hell won’t need them in Thimbleweed Park.

At its heart is a slow-boiling, neo-noir mystery infused with the satirical humor and clever puzzles that put Maniac Mansion and Monkey Island on the map. It’s a game with five playable characters, a sprawling world to explore, and a story big enough to get lost in. An irreverent homage to True Detective, Twin Peaks, and The X-Files (with a little Stephen King tossed in for kicks). An adventure that takes you back to a simpler time, when puzzles were puzzles and story ruled.

“Yeah, right,” you’re saying. “A point & click adventure that looks like it was made in 1987, one of the hottest indie releases of 2016?” Don’t just take our word for it. Get a glimpse of what Agent Ray is up against in the first Thimbleweed Park story trailer and judge for yourself.

Successfully funded on Kickstarter in December 2014, Thimbleweed Park is an adventure game headed for a late 2016 release on Windows, Mac, Xbox One, and Linux. Android and iOS will follow soon after.