ROCKSMITH 2014 EDITION IS NOW AVAILABLE ON XBOX ONE & PLAYSTATION 4 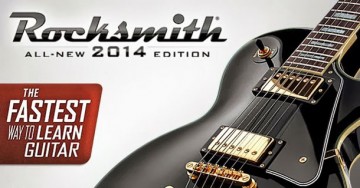 Today, Ubisoft® announced that Rocksmith® 2014 Edition for Xbox One, the all-in-one games and entertainment system from Microsoft and PlayStation®4 computer entertainment system is now available. More than three million people have learned to play guitar and bass through the award-winning Rocksmith® method, the fastest way to learn guitar*.

Rocksmith 2014 Editioncomes with more than 50 tracks to learn from, and as of this month, the total library of songs to choose from across games, including downloadable tracks stands at 500 songs, with new tracks added regularly. This December, guitar legend Jimi Hendrix will make his Rocksmith debut with 12 tracks available free for Xbox One and PlayStation®4 system owners through January 31, 2015. The Jimi Hendrix track list, which will be available for purchase after the free limited time offer expires, includes:

Players making the jump to the latest consoles can import previously acquired DLC tracks across systems from the same manufacturer, from Xbox 360 to Xbox One and PlayStation®3 system to PlayStation®4 system without having to repurchase content or pay additional licensing costs. As of this week, Rocksmith 2014 Edition boasts a song library of 500 playable tracks, spanning multiple decades and musical genres.

New to Rocksmith 2014 Edition on Xbox One and PlayStation®4 system is the integrated streaming and capture feature players can use to record and share their best performances as well as show off their favorite custom tones from Tone Designer. Now with 1080p HD graphics for greater clarity and visual quality, Rocksmith 2014 Editionis better than ever.

On PlayStation®4 system, Rocksmith 2014 Edition will support Remote Play through PlayStation®Vita handheld entertainment system where players can view songs at a locked mastery level without any scoring or input required; this is perfect for players looking to review a song in its entirety without feedback, study specific sections of songs or practice in another room.

Two versions of the game are now available. The standard edition includes the Rocksmith Real Tone Cable, a unique 1/4″ to USB cable developed exclusively for Rocksmith, for $79.99 and a digital version is available for $59.99. The Real Tone Cable included with previous Rocksmith versions is also compatible with Xbox One and PlayStation®4 system.