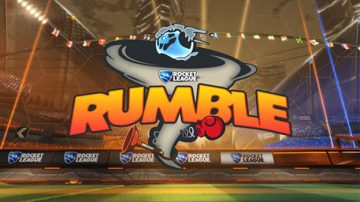 Independent video game developer and publisher, Psyonix, is pleased to announce that its chaotic new Rocket League® Rumble mode will be available for download later today. This FREE new mode gives players access to 11 randomized power-ups, including the “Magnetizer” (a sustained force that attracts the ball to your car), the Plunger (a ripcord-like attachment that snaps the ball to your position), the Freezer (which freezes the ball in-place), and plenty more.

Like the “Hoops” and “Mutator” modes before it, Rocket League® Rumble will appear in Online Playlists, and also will be available in both Private and Exhibition matches.

Also introduced with today’s update is the all-new “Crates and Keys” system, which will help fund upcoming esports events and prize pools. With this new optional system, random Crates will occasionally drop in Competitive matches and players can then purchase Keys to access their contents. These random, but exclusive Crate items can then be kept or traded with other players (another new feature in the update!) and include everything from “Import” Battle-Cars and unique animated Decals, to Exotic Wheels and other cool Garage accessories.

Finally, today’s update also will see the Beta release of both the SteamOS and Mac versions of the game, in addition to a number of “quality of life” improvements that include a new Rocket Labs arena, more variations for existing stadiums, the ability to save multiple vehicle presets, the aforementioned player-to-player trading, and much, much more!

Full details regarding all features included in the Rumble update can be found in our official Rocket League® blog.