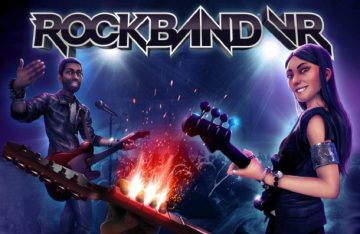 If Rock Band VR’s classic mode is about the pursuit of a note-perfect studio recording, Rock Band VR’s performance mode, illustrated in the above gameplay video, represents the creative freedom of a live concert where no two performances sound exactly the same. In this mode, players experiment with different chords, notes and strum speeds to develop their signature sound and make each performance their own. It’s a completely new kind of music gameplay, it’s perfectly suited to VR, and it’s unlike anything else Harmonix has ever created.

Underpinning the gameplay is an amazing sense of presence you can only get in VR. From the moment the player takes the stage, they’ll experience what it’s like to perform in front of sold out crowds – sweaty palms and all. To deliver this fantasy, Rock Band VR focused on the details – from working effects pedals to interacting with your bandmates to the ability to use your guitar to bang on the drummer’s hi-hat cymbal. It’s an incredibly immersive experience.

While the gameplay may have changed, scoring and leaderboards remain as central to the Rock Band experience as ever. Players will need to develop a mastery of Rock Band VR’s new gameplay mechanics if they want to claim a top spot. Chaining together chords and notes into musical phrases and combos will earn players points, while timely deployment of overdrive and signature rock moves, like head banging in time to the music, will trigger multipliers to boost scores even further, earning more stars. It’s a deep, complex system that rewards both technical proficiency and creativity.

Traditional Rock Band gameplay will have its own dedicated leaderboard at launch in Classic Mode.

A more detailed look at scoring was posted on our blog here: http://www.harmonixmusic.com/blog/rock-band-vrs-first-setlist-reveal-scoring-details-announced/

Rock Band VR features the first scripted narrative campaign to appear in a Rock Band game. As the new guitarist for the band Autoblaster, you’ll be right in the middle of your band’s journey from playing dirty local bars to decadent theaters.

As you progress through the Rock Band VR campaign you’ll experience rock and roll moments you never thought you’d be able to experience firsthand, all while surrounded by unique and memorable characters.

A more detailed look at the campaign was posted on our blog here: http://www.harmonixmusic.com/blog/rock-band-vrs-second-setlist-reveal-campaign-details/

Rock Band has a history of amazing soundtracks and Rock Band VR is no exception, the following 60 songs make up Rock Band VR’s core soundtrack:

And that’s just the beginning. Rock Band VR will release additional tracks as DLC starting next month with six songs from Aerosmith. The new songs will be available in the Oculus Store for $2.99 per track:

Additional Rock Band VR DLC will be announced via Rock Band’s Twitter and Facebook pages as well as the Rock Band blog.

About Rock Band VR The first VR entry into one of the best-selling and most beloved game franchises of all time, Rock Band VR will pioneer an entirely new type of musical gameplay on the Oculus Rift. Rock Band VR encourages players to experiment and develop a signature sound, delivering unique renditions of their favorite songs. Complete with leaderboards, a narrative campaign and classic mode, Rock Band VR has something for everyone.

For more information on Rock Band and to stay up to date with the latest news and announcements, head over to the Rock Band blog or follow @RockBand on Twitter for updates.