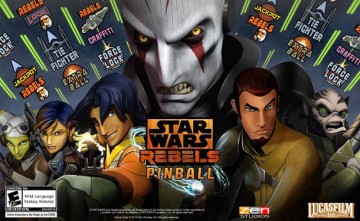 Zen Studios, a maker of popular digital games including Pinball FX2 and Zen Pinball, has revealed the latest pinball table, Star Wars™ Pinball: Star Wars Rebels™,  based on the critically acclaimed animated TV show, Star Wars Rebels. The table will be available across Zen’s pinball platforms, including Pinball FX2, Zen Pinball 2, and Star Wars™ Pinball, on console, PC, and mobile on the week of April 27, 2015.

Star Wars Pinball: Star Wars Rebels will take players on a journey to a galaxy far, far away, teaming them up with the crew of the starship Ghost, including Kanan Jarrus, Ezra Bridger, Zeb Orrelios, Sabine Wren, Hera Syndulla and the grumpy astromech Droid™ Chopper as they join forces to take on the evil Empire. The table will feature fully-animated starships including the Ghost and TIE fighters, a flaming engine thruster spindisk, Chopper’s own mini playfield, and seven exciting missions inspired by the show.

“Players have been anxious to see if Zen Studios and Lucasfilm would continue creating new Star Wars™ pinball tables. I am happy to confirm that our teams are working together to do just that,” said Mel Kirk, VP of Publishing at Zen Studios. “Star Wars Rebels is set during a time period never explored in the films – between Episode III and Episode IV lies a 20 year stretch of Star Wars history. We’re delighted to be able to bring our own blend of pinball magic to this new phase of the Star Wars universe.”