This year, as the penultimate shopping season switches into high gear, it suddenly occurred to me that few if any games have ever dealt with Christmas or the Holiday Season. Being the inquisitive spirit that I am, I took it upon myself to conduct a query into the exact nature of this problem, positing such incisive questions as, “Why are there so few Christmas themed PC and console games?”. “Is it because the holiday theme is constrained by both niche marketing and limited time appeal?”, and perhaps most importantly, “Is it truly possible to play eight-hours straight of Star Wars: Knights of the Old Republic and still write a gratuitous Christmas themed article for Game Chronicles Magazine?”

An incisive line of academic questioning? You bet. A hot topic for a feature article? Maybe. Completely useless rambling? Probably, but the fact of the matter remains that there is a large dearth of holiday themed games out there, and unless there’s a Valentines Day First Person Shooter (featuring a cameo by the Easter Bunny?) or a rollicking RPG tribute to Mother’s Day that I haven’t heard of, then it stands to reason that there are several important market factors out there holding Holiday gaming back.

Now normally, I’d begin by pointing out several basic facts underlying the intricate economical system of checks and balances that determine supply and demand in the gaming industry, move on to an in-depth analysis of the fundamental crypto-psychic filaments that hold the delicate retail market in place and conclude with a rhetorical and generally vague notion that conveniently places the blame somewhere between software developers, publishers and John Carmack’s repressive middle school teachers who told him he’d never amount to anything. Yes, all that and more could be done, ultimately providing the groundwork for a Nobel Prize winning graduate thesis or perhaps the cure to your insomnia, but this year I’ve found it altogether easier to blame Demons and their Overlord Gary Coleman. 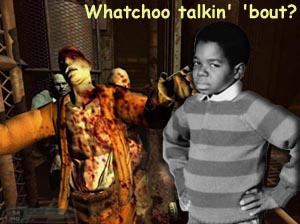 Yes, it’s true (and you heard it here first) – Gary Coleman, the lovable do-gooder from TV’s Different Strokes, no longer content to live on syndication checks and his fat cat security guard payroll has turned his energies to the dark malicious world of conspiracies, enlisting the Demons from Doom, Heretic, Quake, Resident Evil, Silent Hill and a few wannabee Xenomorphs from the Aliens vs. Predator series to do his otherworldly bidding. Despite the fact that this brilliant theory came to me at 3 am after an all night orgy of Pizza Hut and Deus Ex 2: The Invisible War I still credit its veracity due to the following truths.

You see, after Mr. Coleman’s cameo in the uber-violent shooter Postal 2 video game developers latched on to the idea of using former television stars as their AI enemies rather than the usual run of multi-eyed, multi-legged, drooling fanged faire that gamers usually find in games. After all, is it not true that one of the hardest things for game developers to do these days is differentiate the hordes of ghoulies, imps, gargoyles and other monstrosities from one another?

Whether it’s Star Trek Elite Force II or Half-Life 2, after a while, a monster tends to look…like a monster. The usual reaction is to point, shoot and ask questions later. This time around however developers are saying to themselves, “Wait, what if we were to use Estelle Getty from the Golden Girls instead of menacing cyber-pinky Demons for Doom III? Then the player would hesitate, ask himself whether or not he should gun-down the Golden Girls oldest and feistiest member in cold blood, and then maybe mull over the prospect of asking for an autograph, but still hesitating because, after all, she’s only Estelle Getty and the Golden Girls has been showing reruns for years now….”

A true, linear and logical line of thought if there ever was one, and now that game developers have begun to embrace the idea (Delta Burke is on the list for a LucasArts game featuring the Hutts) Mr. Coleman has taken it upon himself to thwart such plans, using the over-worked and underpaid minions of the damned to aid his fiendish schemes. 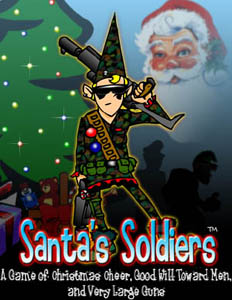 What does all this have to do with Christmas gaming? Well, it’s been rumored around the ‘net that the first big launch to feature B-list TV actors from the late seventies and early eighties is going to be a Christmas themed game. Coming from red-hot developer Santa’s Sweatshop (whose credits include Frosty: The Original White Gangsta and Elf Town 2: The Bloodening) this Christmas themed game, entitled Santa’s Soldiers: Episode I, plans to incorporate almost every top genre today in order to simulate the feeling of assaulting a mall at Christmas time during peak hours, armed with nothing but a wallet stuffed with credit cards and a whole lot of gumption.

In the beginning the game will use Grand Theft Auto 3’s driving style controls to allow shoppers to ram other patrons cars and ‘pop-caps’ at the Mall parking lot while searching for a space. Once a space has been secured (handicapped or otherwise) a Warcraft III RPG interface will be used to place as many shoppers in congested areas of the mall as possible, topped off by a Doom-style first person shooter interface to snag limited retail goods, argue with the attendant at the cash register and try to avoid mall security.

The most hyped element of Santa’s Soldiers is its end boss, featuring none other than (you guessed it) Gary Coleman himself, who will use handcuffs, nightsticks, mace and a variety of assorted Different Strokes sayings (Watch you talkin’ ‘bout everyone!) to keep you from exiting the shopping arena with your hard-won Christmas gifts.

Because Coleman plans to run for California State Governor a second time, he needs to keep his public image clean and professional. But after character and licensing talks broke down with Santa’s Sweatshop Coleman turned to the dark arts, summoning all the denizens of the gaming world’s pixilated deep to keep Santa’s Soldiers from reaching a completed state.

It’s a two way deal – in return for haunting the developers dreams, putting salt in their coffee and inhabiting the nether regions of their lost emails, Coleman will grant the monsters of the gaming world important cabinet positions in his new gubernatorial regime. From such a position of power, the ghouls and goblins could dictate new anti-stereotypical legislation to force game developers to show them in a more favorable light. Head biting and blood spewing be damned – these monsters are going to college and give something back to the community!

If Christmas games take off in popularity, Mr. Coleman reckons, other holiday inspired games can’t be far behind, including Martin Luther King Jr. Tetris and Christopher Columbus Teen Dance Party. Such a flood of paltry imitative games would ruin the uniqueness of Coleman’s coveted position in the public eye, putting his chances for election as Governor of the State of California, at about slim to none, just below where it sits right now, at none to never.

And thus dear reader, with the conspiracy laid bare before the illuminating light of truth and justice, you now see exactly why Holiday games have been so few and far in between. The conspiracy between Gary Coleman and Demons is a viscous circle of antipathy against which few if any game developers have the nerve to stand up against, and after all, doesn’t it make much more sense than saying that holiday games don’t traditionally sell well outside of their respective seasons? Absolutely.

Now, if you’ll excuse me I have continue my research into the JFK assassination, which has put me hot on the trail of a diabolical conspiracy between Michael Jackson, Fidel Castro and John Romero’s Daikatana.