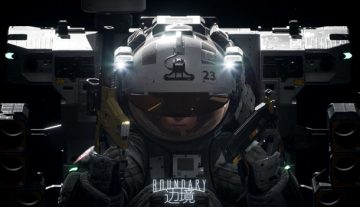 With a publisher now backing the remaining development and launch of the title the game will be looking to line up a Q1 2020 release date on both PS4 and PC. Previously revealed at ChinaJoy in Shanghai in 2016, Boundary is the first of the China Hero Project titles to benefit from the program to help fund and bring Chinese games to the global market.  The multiplayer tactical space-based shooter puts players in the role of a heavily armed astronaut in space engaging in fierce zero gravity firefights and executing low-gravity operations on orbiting space installations against enemy astronauts and other entities.

“Our publishing agreement with Huyagives us the much needed time to line up a simultaneous launch across PlayStation 4 and PC platforms and moves us out of the traditionally competitive last quarter. While any delay to a well-received concept is never ideal, we want to use the additional time we have to invest into a solid product that our supportive fans and growing community deserve.” said Frank Mingbo Li, CEO, Technical Director and Founder of Surgical Scalpels.
Designed as a light MOBA styled game with 5 Vs 5 tactical combat, Boundary is setting its sights on delivering a fast and agile shooter geared around player customization.

With a whole host of customization options for players to choose from, Boundary aims to provide a tailor made approach to loadouts, space suits and tactical space warfare. Weapons range from machine pistols to converted assault rifles and more powerful sniper rifles, all of which utilize a modular upgrade system to mix and match at the player’s preference. Players can also customize individual weapons using a huge range of available components including optical sights, muzzles, stocks, barrels and foregrips.

Aside from the traditional Deathmatch and Free For All modes, Boundary will also include Facility Capture and Orbital Purge game modes. Multiplayer maps aim to provide a mixture of space installations to fight amongst, including the wreck strewn debris field of a Space Elevator that will be revealed later this year. Additional features will also be revealed in the coming months.

Boundary is currently prepping for a week long appearance at Gamescom where it will go in front of press for the first time in Europe. To coincide with today’s publisher announcement, developer Surgical Scalpels and Huya has also released a new Gameplay trailer for the game here:

I've been an avid gamer since I stumbled upon ZORK running in my local Radio Shack in 1980. Ten years later I was working for Sierra Online. Since then I've owned nearly every game system and most of the games to go with them. Not sure if 40 years of gaming qualifies me to write reviews, but I do it anyway.
You might also like
Gaming NewsPCPlayStation 4Video Game Trailers