Birdman… Mr. 900… The Michael Jordan of skateboarding… Tony Hawk has been called many things throughout his illustrious career, but gamers know him best as the king of skateboarding games. His games have sold millions of copies across multiple platforms, improved significantly with each incarnation, and set the standard for all other action-sports games. The latest installment, Tony Hawk’s Underground (aka THUG), once again introduces new gameplay elements into the mix and shifts the focus from the pro skaters to the game players. To celebrate THUG’s impending release, Game Chronicles looks back at previous Tony Hawk titles and examines how the series has progressed. 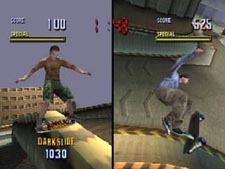 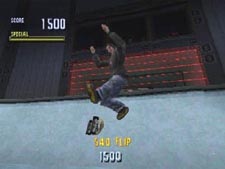 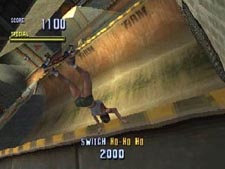 Before Neversoft and Activision conspired to unleash skateboarding nirvana upon the gaming public, very few skateboarding games made much noise. Sure, 720° and Skate or Die were fun games, but they were released in the ’80s! Electronic Arts tried to make its mark in the late ’90s, releasing Street Sk8er on the PlayStation, the first 32-bit game devoted entirely to skateboarding. While it showcased skateboarding better than Sony’s “Xtreme” series, the gameplay did not afford players much creativity or freedom.

Then Tony Hawk’s Pro Skater came along and put all other skateboarding game before it to shame. Pro Skater not only captured the essence of skateboarding, but also provided tight, addictive gameplay to promote endless hours of enjoyment and experimentation. The premise now seems rather simple: Take several professional skateboarders, one of them being the most widely recognized in the world, and throw them into a game filled with fully shreddable environments. Wrap it all up with a deep trick system, intuitive controls, entertaining gameplay modes, rocking music, and voila – Tony Hawk’s Pro Skater was born.

Remarkably, the original Pro Skater is still going strong, four years after its original release. A fairly accurate port of the game will be grinding its way onto Nokia’s N-Gage this November. 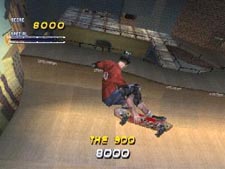 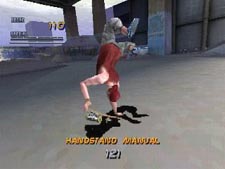 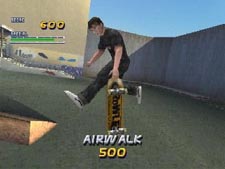 Quite frankly, if given the chance to handle Tony Hawk’s Pro Skater 2, most game developers would have likely called it a day after fine-tuning the Pro Skater graphics engine and adding new skaters and levels. Neversoft is not most developers. Marking what would become a trend for the company, it introduced a significant gameplay component in the sequel: the manual. Perhaps the single most important addition to the Tony Hawk series thus far, this maneuver allowed players to link tricks, build combos, and expand their creativity.

However, Neversoft did not stop there – no, sir. Beyond the obligatory new skaters, tricks, and levels, Neversoft included a create-a-skater feature and skatepark editor to let players customize the experience. It also added new control functions (nollie and switch-stance buttons), revamped the Career mode, and rewarded completists for clearing all the gaps hidden throughout the levels. Music again played a strong role, with hip-hop acts accompanying punk and rock groups on the soundtrack.

For some, Pro Skater 2 remains the most playable game in the Tony Hawk series. Indeed, the follow-up, Pro Skater 3, dramatically increased the pace of gameplay and placed a greater emphasis on long, high-scoring combos. Laid-back gamers and skateboarding naturalists did not respond very favorably to such changes. 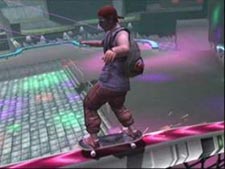 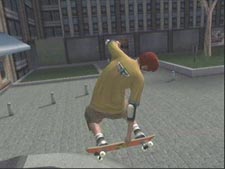 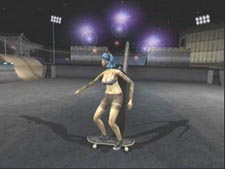 An Xbox exclusive, Tony Hawk’s Pro Skater 2x arrived at an inopportune time. It launched with the Xbox, where it was overshadowed by Halo and Dead or Alive 3 hysteria, and came just weeks after the highly anticipated Pro Skater 3 hit the PS2. In other words, it was a relatively small blip on the radar.

But it’s perhaps what the game didn’t have that determined its ill fate: Pro Skater 2x lacked the improvements found in Pro Skater 3, as well as its increased speed and online play. Still, the game provided a nice trip down memory lane and served as a distraction for Xbox owners awaiting their version of Pro Skater 3. 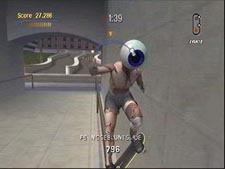 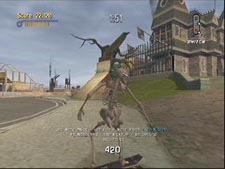 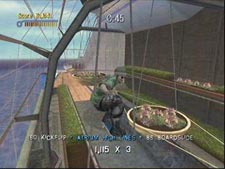 Tony Hawk’s Pro Skater 3 introduced several new things to the series, beginning with the revert (a move that links vert tricks). When combined with the manual, the revert made it possible for skilled players to stretch combos across entire levels and score upwards of a million points in the process. Accompanying the revert were flatland tricks, hidden combos, and improved lip tricks.

Pro Skater 3 was the first game in the series to appear on the then next-generation consoles, including the PS2, Xbox, and GameCube. This meant the graphics and animations were slicker than ever, complete with mouthy spectators populating the large levels. And the action was blazingly fast – maybe a little too fast for some. To better appreciate the graphics, players could take advantage of the new camera control to look freely around the environments.

New sound effects and a bigger, more varied soundtrack rounded out the improvements to the audio-video presentation, while new multiplayer modes and online play (PS2 only) developed fiercer competition among players. Of course, the Career mode underwent changes (it was made more challenging and diverse), and the skater and park editors from Pro Skater 2 were redone and packaged with additional options. Strangely, though, Bob Burnquist decided to take a break from the series to star in Konami’s ESPN X Games Skateboarding, letting the Jackass himself, Bam Margera, sneak into Pro Skater 3’s lineup of skaters. 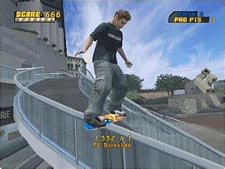 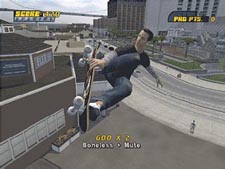 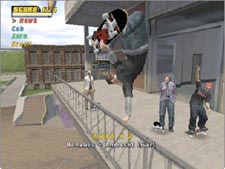 Up until Tony Hawk’s Pro Skater 4, the series’ venerable Career mode constrained players to a restrictive time limit. Pro Skater 4 changed all that by removing the clock, thus allowing gamers to explore the expansive levels and attempt goals at their own pace. Furthermore, it infused “pro challenges” into the goal structure – assigning each skater a unique challenge – as well as fun mini-games (tennis, baseball, “dodge ball,” etc.).

Supplementing the revised Career mode was a series of new moves, including spine transfers, skitching, and midair recovery. All the skaters from the previous games returned, joined by some of the coolest secret skaters the series has seen (Daisy, anyone?). The skater and park editors contained new design options, and the online play in the PS2 version was further refined.

On the technical side, Pro Skater 4 brought widescreen support and high-definition resolution (Xbox version) to the series, though the graphics were only a small step up from Pro Skater 3’s. Conversely, the audio received a boost from Pro Logic II (GameCube and PS2) and Dolby Digital (Xbox), while the soundtrack boasted an even larger and more eclectic collection of tunes than that of Pro Skater 3.

The Tony Hawk series has certainly come a long way since debuting on the PlayStation in 1999, with Tony Hawk’s Underground representing the most dramatic change to the Tony Hawk formula yet. Whether or not gamers embrace THUG as warmly as previous games in the series remains to be seen. One thing’s for sure, though, it won’t be Activision’s last Tony Hawk game – not by a long shot. In July 2002, the publisher inked a deal to maintain rights to the Tony Hawk license until 2015. It appears gamers already have something to look forward to on the PS4.