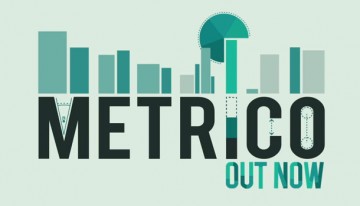 Dutch independent developer, Digital Dreams, makes its console debut today with Metrico, a unique infographic puzzle action game, now available exclusively on PlayStation Vita. Set in a world filled with infographics, Metrico challenges players through six worlds filled with bar charts, line diagrams and pie charts, each of which directly react to the player’s movements, actions and input. For example, one bar diagram might grow with each step a player takes to the left, while another might decline with every jump. Players must explore Metrico and carefully analyze every move to see how they affect the world and what will help them advance. This game mechanic, called “Input Morphing”, forces players to think about actions that they normally wouldn’t consider in a video game. Metrico is a combination of exploration, skill, experimentation, but above all: thinking outside of the box.

Metrico is an atmospheric puzzle action game that centers around infographics with a mind of its own. The idea was born a few years ago, out of admiration for the beauty of infographics as an art form and was reinforced by seeing that infographics have become increasingly important in contemporary pop-culture. While they haven’t made their way to videogames yet, Digital Dreams feels it’s a place where they can work exceptionally well, not only because of the pretty aesthetics, but also because games by nature are about interaction with data visualization.

Metrico is the first Pub Fund deal by Sony for a PS Vita only title. Dutch synthesizer composer ‘Palmbomen’ made the Metrico soundtrack.