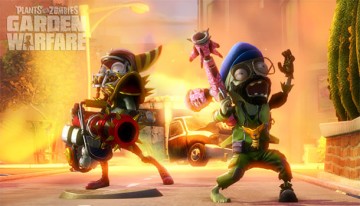 PopCap Games, a division of Electronic Arts Inc. (NASDAQ: EA) today released Plants vs. Zombies Garden Warfare for PlayStation®4 and PlayStation®3 computer entertainment systems. Following its successful launch earlier this year on the Xbox One and Xbox 360® video game and entertainment system, as well as Origin.com for PC, Plants vs. Zombies Garden Warfare has already generated a devoted following of players by fusing the hilarious humor of the beloved Plants vs. Zombies franchise with deep yet accessible shooter gameplay. The game also became an instant hit with critics as well, with IGN calling it, “a unique, hilarious shooter experience” and Destructoid stating, “it feels fresh every time.”

“We’ve been perfecting Garden Warfare and optimizing it for PlayStation gamers.” said Jeremy Vanhoozer, Plants vs. Zombies Franchise Creative Director at PopCap. “In addition to split-screen co-op on the PlayStation 4, players will be able to command the battlefield from Crazy Dave’s RV or Zomboss’ blimp by using their PlayStation Vita or the PlayStation App on their iOS and Android devices, making for endless combinations of multiplayer fun.”

Plants vs Zombies Garden Warfare is packed with explosive combat action as players choose a side to face off against Plant or Zombie enemies. Garden Warfare features multiple gameplay modes and a range of surprising and unconventional weaponry to wage punishing attacks. Franchise favorites such as Peashooter and Chomper will be available, along with new crazy characters that will roam the 3D worlds.

I've been an avid gamer since I stumbled upon ZORK running in my local Radio Shack in 1980. Ten years later I was working for Sierra Online. Since then I've owned nearly every game system and most of the games to go with them. Not sure if 40 years of gaming qualifies me to write reviews, but I do it anyway.
You might also like
Gaming NewsPlayStation 3PlayStation 4Video Game Trailers

RTX ON: A Dozen More Games will have Ray Tracing and DLSS This Year

Soccer Adventures Now on Steam
Be the first to comment!
Leave a reply »

1
828
The Walking Dead: Saints & Sinners Review – Oculus Quest
2
736
Metamorphosis is 33% Off on Steam!
3
736
Werewolf: The Apocalypse – Heart of the Forest launches on October the 13th
4
736
Synth Riders Celebrates Anniversary with a Month Full of Treats and an Oculus Ques...
5
736
Worm Jazz Review – PC
6
736
Take to the Skies and Choose a Side in the New Trailer for Next Generation Air Com...
7
736
CRASH BANDICOOT 4: IT’S ABOUT TIME IS AVAILABLE NOW
8
735
Frictional Games Shows Off First Gameplay Footage of Amnesia: Rebirth
9
735
Join the Galaxy’s Finest as Star Wars™: Squadrons Soars Into Homes Today
10
735
The Falconeer First-Look Preview – PC
All Original Content on Game Chronicles is Copyright (c) 2002-2020
Sinjin Solves Walkthroughs Copyright (c) 1996-2020 by Mark Smith