Gearing up for our upcoming review of “PlanetSide: Core Combat”, we realized that so much of PlanetSide itself had changed that an update was in order. For those that didn’t read my PlanetSide review, I loved the team-based MMOFPS. Its blending of foot and vehicular combat, RPG influences, massive playing world, and striking graphics won me over. However, I did have my reservations about PlanetSide’s long-term appeal and certain aspects of the game that I saw as potentially unraveling in the future.

The Skyguard and Liberator 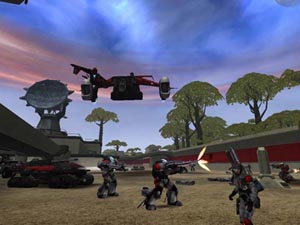 Firstly, the two “in progress” vehicles mentioned in our review, the Skyguard and Liberator, are now out and both quite devastating on the battlefield. For any airborne player, the two passenger Skyguard is and absolute terror. Extremely nimble considering the firepower it carries, the Skyguard is an ideal anti-air option for battles that break out between bases as its speed make them well suited for the open terrain.

The Liberator, my new favorite, is really a three-person bomber (one pilot, one bomber, and one tail gunner) but doubles as a mini-dropship and, in the right hands, an excellent fighter. As a bomber, the Liberator is a base’s worst enemy, as having one appear on your radar virtually guaranties that troops and vehicle drivers alike are about to be staring at the respawn screen. Frankly, I’ve found piloting the Liberator as a bomber to be a hassle since I only have the vaguest notion of what my bomber is. However, as a fighter, the Liberator has proven to be the tank of the skies. Although something of a tugboat relative to its Reaver and Mosquito cousins, it is still nimble enough to fly below tree level and its quick slowdown speed will send those faster craft barreling ahead, putting them directly in front the Liberator’s 35mm guns.

In my review, I mentioned that Sony’s tweaking had thus far been controlled and paced (rather than making wild changes—something that makes other MMOG’s pendulums of imbalance). So far, they have continued this approach as PlanetSide is now startlingly balanced for an MMOG. 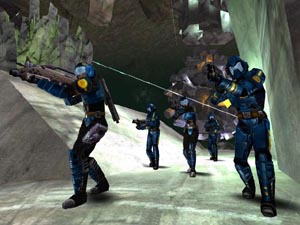 Playing for the first time in around a month and since Core Combat was released, I loading up my Terrain empire character and went out to hunt The New Conglomerate (NC) members (the whipping posts of PlanetSide). Finding a base where the NC and Terrain Empires were fighting for a base, I dropped in and was immediately both taken aback and elated to find the once-hopeless NC were thoroughly tearing us to shreds. What once would have been a cakewalk was now an intense 30-minute battle where the Terrains were eventually forced into a retreat due to overwhelming numbers.

The same goes for the Vanu Sovereignty who, last I played, had some weapons that were so ridiculously overpowered that many of the empire’s members refused to use them. Now they stand head-to-shoulder with the NC and Terrain empires. The result is that the number of soldiers and their skill rather than fluctuating gameplay imbalances decide the outcome of battles.

In addition, when the review was first posted, large-scale leadership was all but nonexistent. However, over the months, a select few now have sufficient Command Points (CP) to issue continent-wide commands. This means that strikes can be coordinated on a very large scale. In fact, it is very common to have multiple commanders carefully organizing multiple squads so that offensive and defensive operations are be carried out smoothly which results in larger and more satisfying battles.

During the Beta period, Dropships were always in high demand. More often than not, an Empire’s Sanctuary was filled with Galaxy Dropships carrying warriors and vehicles to hot spots. However, there was little reward in terms of experience points for the pilot and so I was concerned that soon these behemoth aircrafts would go the way of the Dodo. They did. Or at least as I knew them. 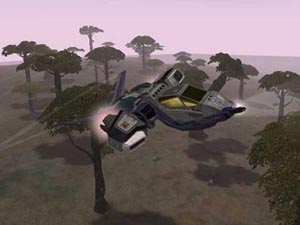 What surprises me is that, rather than combating this extinction by offering Galaxy pilots incentives, the developers have instead encouraged their demise by making shuttle delivery (the other option for reaching hotspots from the Sanctuary) far more efficient. Since I love the Dropships, this is something that I should be disappointed by. However, the result is that Dropships are now even more valuable on the battlefield (albeit, highly rare ones).

Rather than taxing passengers long distances, they instead spend all of their time making small and very dangerous hops between spawn points and hot spots. Recertifying myself in these craft, I gave them a second go and their new position works very well. Although my experience points went stagnant, the nearly continuous fire I was under made it a very intense gameplay experience and good Galaxy pilots are shown a great deal of appreciation from commanders and those that they transport.

Another major issue from my first review was the interminable waiting that padded the bulk of PlanetSide’s gameplay. However, with Galaxies now absent, players immediately Shuttle to hot spots, and, once there, are given little time to relax due to some excellent tweaking to the base capturing system as well as the growing number of players and better use of aircraft and AMS’s (portable spawn points). In the end, the vast majority of time I’ve spent playing PlanetSide in the last week has been spent fighting or playing support roles rather than waiting for a hack to go through or for a ride from the Sanctuary.

The Influence of Core Combat

One of the greatest benefits of Core Combat’s release is that it affects everyone. Although only Core Combat owners can descend into PlanetSide’s cavernous underbelly, the ancient technology they return with benefits everyone. 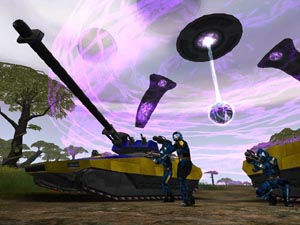 Since a large part of Core Combat is fighting for valuable technology that is then installed in the bases topside, vehicle and base force fields, pain fields, increased foot speed and health generation influence everyone in their range. Of course, while available only to Core Combat owners, a new set of ancient technology-based vehicles still affect everyone and help add greater depth with the extra danger / protection they introduce.

The Success of PlanetSide and its Future

As with any MMOG, no matter how much potential it may have, if the players are not there then what’s the point? Thankfully, PlanetSide is crawling with players. Right before Beta ended, Sony opened up their severs to everyone and the number of players exploded. Once the game went retail, most of those gamers went their separate ways but, judging by the size of battles these days, PlanetSide has slowly accumulated more players than ever. To put it bluntly: PlanetSide is a success.

But it doesn’t end here. Aside from Core Combat to PlanetSide, Sony continues to work on the main game itself and add new features and vehicles. Next up? The Loadstar: an aircraft capable not only of carrying any vehicle, but, once landed, to act as a vehicle repair and re-supply facility. This will be the third vehicle added for free since PlanetSide was launched only six months ago so the long term prospects for PS owners is looking very good.

Along with everything mentioned, there have been a number of patches improving PS’s performance. Remarkably, PS now both looks and runs better on the same system on which it was first reviewed. What does all of this add up to? A game that continues to hold its own against the tech curve and whose gameplay continues to expand and be refined. Whether you opt for Core Combat or not, now is the time to hop into the world of PlanetSide or give a second try.