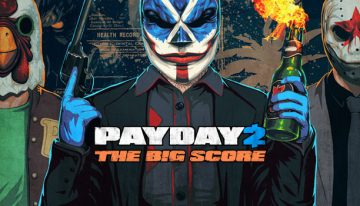 Xbox One console heisters can now mask up and break out the thermal drills as 505 Games and Starbreeze AB revealed that ‘The Big Score’ bundle for PAYDAY 2: Crimewave Edition is now available for purchase on Xbox One via the Microsoft Store. The Big Score brings a substantial and long-awaited payout of 10 premium DLC for heisters seeking new experiences in their larcenous adventures, at a discount so players don’t have to break the bank in order to break-into the bank.

In addition, all players who own PAYDAY 2: Crimewave Edition will receive a free update that brings more than 20 free content updates which includes items like the First World Bank Heist, the Overkill Pack, the Jacket Character Pack, and much more.

PAYDAY 2: Crimewave Edition gives gamers the tense thrill of planning and pulling off heists as up to four players must work together to complete a number of illegal, strategic and action-heavy jobs, including robbing banks, for their big pay day. As missions are completed, players can change up their playstyle with upgrades to their skillset, guns and gear – all in stunning 1080p HD visuals.

The Big Score release for PAYDAY 2: Crimewave Edition offers players a flexible selection of 10 premium DLC packs that can be purchased separately for between $4.99 and $6.99 per pack. Players can also purchase all 10 packs together for $39.99 – a 30% savings for thrifty heisters. The Big Score packs include:

PAYDAY 2: The Big Score is available via digital download now on the Microsoft Store for Xbox One for $39.99. Players can also bundle PAYDAY 2: Crimewave Edition with the bundle for $49.99 and look forward to the retail version in Fall 2016 for $49.99 as well.