New Music Coming to GTAV: The Alchemist and Oh No Present Welcome to Los Santos 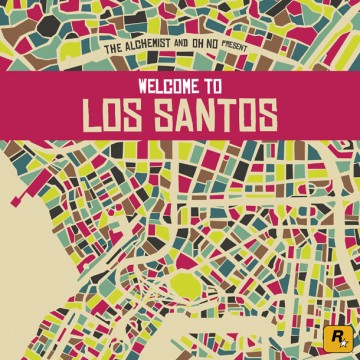 Brand new radio station and soundtrack album release are on the way from GTAV score composers The Alchemist & Oh No.

Today, we’re proud to announce The Alchemist and Oh No Present: Welcome to Los Santos, a genre-spanning collection of new music for Grand Theft Auto V, debuting with the PC version of GTAV on April 14th plus a full standalone album release to follow on April 21st from Mass Appeal Records.

Welcome to Los Santos features fresh tracks inspired by GTAV’s original score, composed by The Alchemist and Oh No in partnership with Woody Jackson and Tangerine Dream to create a uniquely ambitious album. The Alchemist and Oh No weave together a musical journey that covers every corner of the fictional world of Grand Theft Auto V and features guests from across the musical spectrum – including Earl Sweatshirt, Little Dragon, Phantogram, Freddie Gibbs, Popcaan, Killer Mike, Tunde Adebimpe and Samuel T. Herring (from Future Islands).

The music from Welcome to Los Santos will debut in GTAV for PC with a new The Alchemist and Oh No-hosted radio station ‘The Lab’ being added to the Los Santos radio dial. Stay tuned for more updates on GTAV music in the future. The album tracks will also be made available in the Rockstar Editor for PC as soundtracks for your original custom videos. The full standalone album, set for release on April 21st, will be available for digital download and at retail in both CD and vinyl releases from Mass Appeal Records.

Read the Vanity Fair article here and listen to the first single off the album, titled “Play it Cool” by Gangrene (The Alchemist and Oh No) featuring Samuel T. Herring (from Future Islands) and Earl Sweatshirt. And stay tuned for much more about the Welcome to Los Santos album in the weeks ahead.