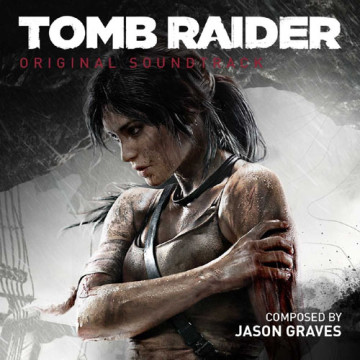 Lara Croft is back and better than ever thanks to her new sidekick, Jason Graves. The new Tomb Raider game not only reboots the franchise with a new origin story, it also achieves new levels of interactive cinematic gameplay worthy of a Hollywood motion picture, thus it only seems fitting that it receives a score worthy of the big screen as well, and Graves has delivered just that.

There are several components that create a great game and while controls and graphics always stand out as the obvious benchmarks I would argue that music plays just as much a role in a game’s overall success, and the score for Tomb Raider, without exception, it integral to the experience you will have when playing this game.

While Crystal Dynamics was busy rebooting Lara, Jason was tasked with the enviable challenge of creating a new sound for the franchise, seeking out a theme and feel for the score that including researching all sorts of instruments and even creating a new one specifically for the game. If you haven’t checked out the “Tomb Raider Jason Graves Music Composer Official Dev Diary” I highly recommend you do.

And while all of these instruments give the Tomb Raider soundtrack a unique sound, the score is oddly conventional in its orchestration. There is a great use of strings that are expertly showcased in tracks like “First Blood” mixed with energetic percussion moments found in tracks like “The Descent”. Personally, some of the more memorable musical moments are found in tracks like “The Scavenger’s Den” and “The Oni” that blend atmospheric and organic sounds with music to create a sense of wonder, adventure, and danger that has a life of its own.

Oddly enough, I usually enjoy listening to soundtracks after the game to visualize and relive my favorite gaming moments, but for some reason I found it difficult to identify the various tracks with any specific gameplay memories. While the music works incredibly well within the confines of the game experience, much like watching a movie, Graves’ magical score just didn’t pack the same punch when listening at my computer or in my car. It’s still a solid recommendation for those looking for some truly unique music, but personally, I found the Tomb Raider soundtrack works best when it’s enhancing the action of your gameplay and not your next road trip.