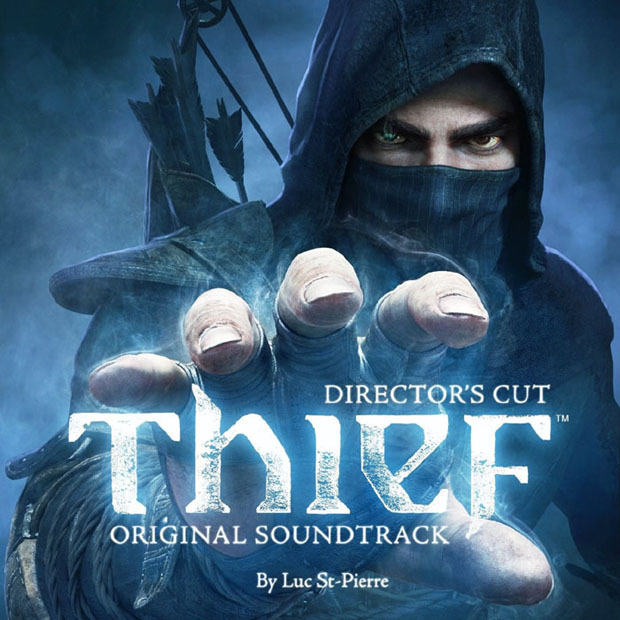 Thief is the long-awaited and much-anticipated sequel in the 3D stealth series that can be traced back to the 90’s.  While this fourth installment from Square Enix might not be the game everyone was hoping for it does bring with it one of the more engaging soundtracks of the year.    Luc St-Pierre has crafted an intriguing mix of classical instruments infused with subtle synthesized elements and somehow even managed to turn distortion and feedback into something harmonic.  For the most part, this 20-track director’s cut soundtrack plays and sound much like a film score with a linear progression of tracks that carries you from the opening main menu to all the key moments throughout the game.

Thief is a slow and plodding game that will have you hiding in shadows for long periods of time with no dialogue or sound effects, leaving you alone with nothing more than the underlying score that is all about enhancing the tension or creating a specific mood for a specific moment.  This is something you might not realize while playing the game, as it simply becomes part of the experience, but when you start listening to these themes outside the game it instantly triggers associative memories with your past gameplay moments.  I was able to relive much of the game while listening to this score sitting at my desk or driving in my car.

While Thief isn’t a horror game there are parts of the score that can go from sinister to terrifying in just a few measures.  The addition of synthesizers to the pure instrumentation of the Filmharmonic Orchestra Prague brought on memories of classic sci-fi horror films like Aliens, and then just as quickly returned me to medieval times with lengthy string and horn sections.  Synthesized effects are judiciously used in tracks like “Entering the City”, “Meeting The Baron” and “House of Blossoms,” to create intense moments of suspense leaving the rest of the score to weave a more ambient mood that rises and falls with the events of the game.  The mix of music for environmental ambience, narrative support, and pure action cues is evenly distributed through the soundtrack and presented in such a pacing and manner that you are never bored.

There is a surprising amount of experimentation going on with the Thief soundtrack, and this unique blend of traditional instruments and synthesized effects easily makes one of my top five listening experiences of 2014.   Luc St-Pierre can add another notch to his belt of successes, and even if you didn’t like the Thief game or have no intention of playing it, fans of dark, moody, gothic horror style music can still enjoy the atmosphere created by listening to this sinister soundtrack now available on Amazon.com or you can download a digital version from iTunes, and as always, check out Sumthing.com for all the soundtracks for all the latest games you’re already playing and those that are coming soon.