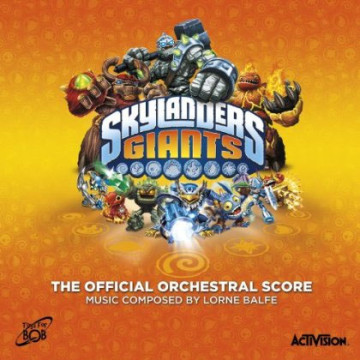 This year has already given us many great games and along with them great music. While most of those scores belong to the AAA heavy hitters that doesn’t mean that other titles are less fortunate. Take Skylanders Giants for instance. It’s already an excellent sequel to an ingenious idea, but it doesn’t hurt that it has an awesome score to accompany it. I love listening to scores all the time and usually there isn’t a day goes by that I don’t listen to a score piece or soundtrack. There are always soundtracks on my iPhone and this time is no different with the release of the Skylanders Giants Original Soundtrack.

Most of the scores and soundtracks that I own feature epic melodies and powerful pieces depicting amazing feats of bravery and the lowest points in some of my favorite stories. In the many times that I’ve listened to the soundtrack of Skylanders Giants over the past several days each track conveys a child-like presence while retaining a solid fantasy vibe. This is not surprising as the whole album is composed by Lorne Balfe, the man who has also composed several of the Assassin’s Creed titles.

Right from the start, I was treated to an almost royal fanfare with the first track, Giants. There are several great pieces amongst this 15-track score but a few stuck with me especially since I’ve had just recently played the games. I really enjoyed the rhythmic drum beats of Junkyard Isles that really helps set the tone for the rest of the score. There is also the heavily pirate inspired track, Cutthroat Carnival that starts out low with windpipes before ramping up with drums mixed with a lute or something of the acoustic persuasion that I found particularly energetic.

Trust be told, there isn’t a bad track on this score and for a game geared for a younger audience that is amazing. While it may be lost to the young, it definitely wasn’t on this child at heart gamer. The Skylanders Giants Original Soundtrack features the right mixture of upbeat battle theme music and the soothing melodies while retaining a very appealing fantasy audio package.

The soundtrack is currently available digitally through all major providers including Amazon.com