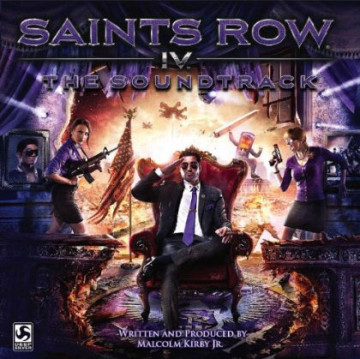 The interesting thing about a game like Saints Row (or Grand Theft Auto) is that we often forget there is even a soundtrack in play due to the heavy emphasis on the numerous and varied radio stations within the game.  I think the designers must find it easier to simply license a hundred tracks and divide them into genre-specific stations, throw in a talk radio channel and create some amusing commercials and you’re done, but not so with Saints Row IV – The Soundtrack.

First off, Saints Row IV does something different this time around – they let you listen to the radio even when you aren’t in a vehicle, which is pretty smart because with the game’s new superhero abilities, you won’t be driving much, if at all, after the first hour of gameplay.   But before I learned that you could somehow channel radio stations directly into your head I was enjoying the score that was underlying the entire experience, and what a score it is.  With 44 tracks, there are nearly 81 minutes of awesomeness for your ears when you discover the music behind one of the silliest and most entertaining games of 2013.

The variety of music changes with each track; always keeping you on your toes and always evoking memories of your favorite parts of the game.  Even if you don’t remember hearing the music while you played the game your subconscious somehow does.    Malcom Kirby Jr. works some magic with his various orchestrations throughout the track list creating unique themes for characters and events, and he even manages to work in a few special riffs that only true gaming nerds will pick up on.

While many soundtracks opt for the pure orchestra sound Kirby isn’t afraid to throw in some techno beats and a bit of synthesizer, which fits perfectly with the whole TRON-Matrix vibe of the game.  Simply put, there is something here for all music lovers, but ultimately, if you haven’t played the game then the soundtrack probably won’t be as enjoyable as it is for those who can appreciate all its subtleties.    I’m just amazed at how much of this score I remember from the game without consciously hearing it…ah, the magic of music.  Check it out in both digital and physical formats at your favorite online outlet and relive the insanity of Saints Row IV.