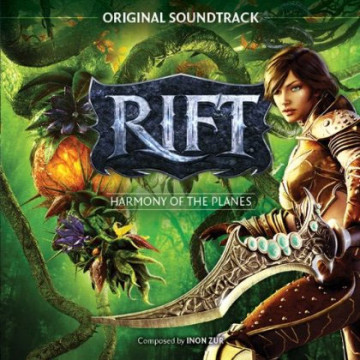 A videogame, in any form, is only as good as its parts. One of my favorite key parts in gaming is the score. RPGs have some of the best music on the planet and usually MMO’s rank high on my list of favorites. I’ve played Rift on and off since its release and I’ve listened to the score amidst the action. Now fans and players of Rift can listen to their favorite musical pieces with the release of the Rift- Harmony of the Planes Official Soundtrack.

This 17 track score composed by industry veteran, Inon Zur (Crysis, Dragon Age) is actually pretty decent with several pieces that stand out once you get to hear them outside of their confines. Inon Zur has been on my radar for a while now, as he has created the scores for some of my favorite games over the years and this time is no different. The soundtrack is actually broken into four parts. Rift’s title theme starts out the album with its energetic tones that make you want to play that fades into haunting vocals performed by Aubrey Ashburn who has worked with Inon Zur before. Her work on this score alone is one of the reasons I like it so much.

The other remaining tracks in this soundtrack are broken down into sets much like the game. You have four tracks devoted to the Guardians and their controlled zones like the majestic “Guardians Theme” heard while in Sanctum. As I’m a big fan of all things eerie I can’ miss the opportunity to mention the awesome dreary undertones of the “Gloamwood” track. On the opposite side of the faction line you have tracks that are more war themed in natured such as the “Defiant Theme” in Meridian. There is also the track for “Freemarch” that combined with drums with woodwinds to create a fierce melody with a small moment of calm at the end. The final set contains the scores for the contested areas of Telara including “Scarlet Gorge” which features upbeat tones mixed with woodwinds and chants and “Stillmoor” which makes me feel like in walking through a sea of calm before a big storm.

One of several things that I enjoy about the Rift- Harmony of the Planes Official Soundtrack is that each track features a variety of emotions within. You get to hear each one with their calmer parts as well as the conflicted moments clearly without any of the clutter of sound effects. As an album, the Rift- Harmony of the Planes Official Soundtrack definitely succeeds in giving the player or fans a better appreciation of the music that they may not have paid attention to in-game. The entire track list was hit or miss with me, but there were a few gems within that will remain in my daily playlists for a while to come.

You can check out the Rift- Harmony of the Planes Official Soundtrack on iTunes, Amazon, or visit your favorite online or brick and mortar store to pick up a copy of this album today.

1
48
The Falconeer First-Look Preview – PC
2
44
Synth Riders Celebrates Anniversary with a Month Full of Treats and an Oculus Ques...
3
36
Metamorphosis is 33% Off on Steam!
4
36
Werewolf: The Apocalypse – Heart of the Forest launches on October the 13th
5
34
Worm Jazz Review – PC
6
30
Take to the Skies and Choose a Side in the New Trailer for Next Generation Air Com...
All Original Content on Game Chronicles is Copyright (c) 2002-2020
Sinjin Solves Walkthroughs Copyright (c) 1996-2020 by Mark Smith