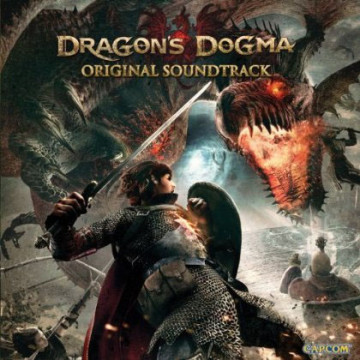 Capcom’s Dragon’s Dogma was an impressively bold concept for an RPG and while the actual gameplay is still some of the best around for the genre the game had issues when it came to story and even worse, its forgettable soundtrack. I had no idea how forgettable until I sat down to review the Dragon’s Dogma Original Soundtrack and couldn’t place a single song with the game. Admittedly, it’s been months since I had played the game, but a good soundtrack sticks with you long after the main event, generating images in your mind when you hear those signature tunes.

I’m not saying the music is bad. How could it be? With Inon Zur, Tadayoshi Makino, and Rei Kondoh collaborating on the 34 tracks contained on the disc, there are moments of pure genius and inspiration but nothing that stamps itself to the Dragon’s Dogma brand. To make things less remarkable, most of the tracks use the same instruments, the same pacing, and even the same underlying theme, making it difficult to identify individual tracks, and most all of the music seems to share its core identity with something you would hear from a Lord of the Rings movie. Again, this isn’t bad, but its far from original and fails to make its mark.

Ultimately, the music is fine within the context of the game since your mind is occupied with other activities, and the music is being used more as an emotional and mood setting device, but when I sit down at home or in my car to listen to music my demands just got a whole lot bigger and the Dragon’s Dogma OST falls drastically short of meeting them. Much like while playing the game, a few minutes after starting the CD the music slipped into obscurity and I had to make a concerted effort to pay attention. The only thing that sets any of the music apart are the few tracks with vocal arrangements and even those become forgettable after their first listen.

With Dragon’s Dogma: Dark Arisen releasing this week there will likely be a renewed interested in the soundtrack. If you find the music particularly moving or even memorable while playing the game then you might want to check out the soundtrack which is available in all your favorite online and digital stores including Amazon, otherwise you might just want to skip, what in my opinion, is one of the most uninspired soundtracks in my current video game OST collection.