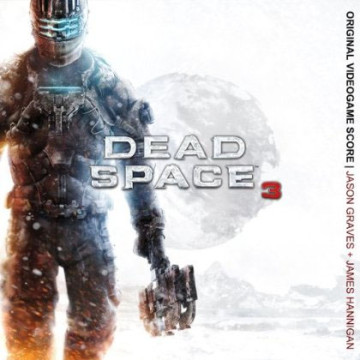 The Dead Space series has always been one of the most immersive experiences for me when it comes to video games; partly because of the unique interface and menus that never take you out of the game, but even more so due to the incredible score that has accompanied each title.  Dead Space 3 is no exception and is one of those soundtracks that I knew I would enjoy outside the game the moment I heard the thrilling and chilling tracks inside the game.

Previous Dead Space soundtracks have opted for a more subdued and atmospheric approach but the score for the third installment takes on big budget Hollywood production values to coincide with the increased level of action and adventure.  Dead Space 3 is more about exploration and discovery rather than just mere survival and the 21 tracks in this soundtrack cover the entire range of emotions that you will experience while playing the game.

There are so many signature moments, each with its own special track, that when you listen to this music, even weeks or months later, you can’t help but flashback to playing the game, especially when listening to my favorite track, “The Ascent”.

Jason Graves’ and James Hannigan’s talents seamlessly blend on this project and even though the tracks alternate in their listed order it’s hard to tell where one man’s work ends and the other begins.  There is a great mix of orchestration in tracks like “200 Years Ago, on an Icy Planet” then things ramp up with energetic tracks like Graves’ “Vomit Comet” and “The Quick and the Dead” then Hannigan will slow things down with “Graffiti Speaks” and “Mountains of Madness”.

The Dead Space 3 score continues to deliver an underlying theme of tension and danger, and thanks to Graves’ and Hannigan’s seamless and cohesive storytelling through music, it also offers up themes of hope, adventure and discovery that you can experience long after you’ve played the game.  I highly recommend this soundtrack for fans of the Dead Space series or just fans of great music packed with emotion.