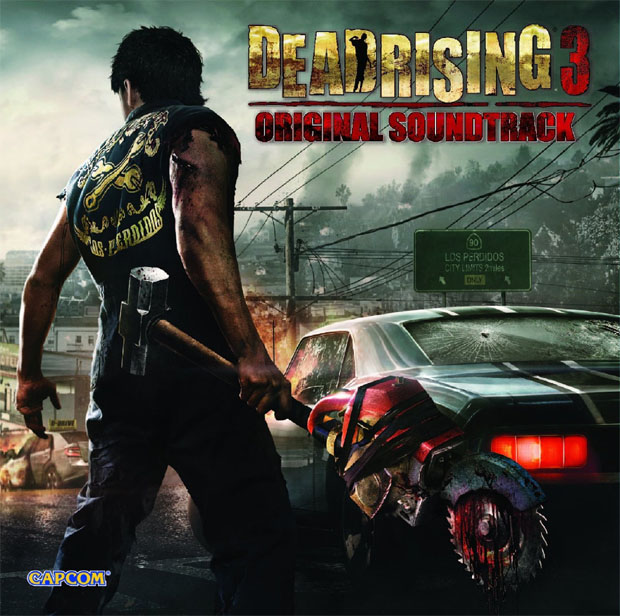 Dead Rising 3 might not have impressed me much as a video game, but it does have one helluva soundtrack going for it.  With most video game scores you usually end up with a dozen or so thematic tracks that linearly follow the events of the game, much like a movie soundtrack, but Dead Rising 3 is a smorgasbord of genres and composers that span the entire spectrum of music and is guaranteed to please and surprise fans of the game and those who just enjoy good music.  This is one of those rare CDs that you can just pop into the player and put on auto-repeat and never look back.

Oleksa Lozowchuk, known for his previous work on the Dead Rising franchise, heads up the fantastic ensemble of talent that contributes to the 40+ tracks that span two impressive CDs.   Lozowchuk takes care of the more traditional scoring while other contributors like Brian Reitzell, Jeremy Soule, Sascha Dikiciyan, Traz Damji, and Celldweller bring their own distinct flavor to the mix.  The star power assembled for this soundtrack is astounding and is mirrored in the quality and variety of music; everything from 80’s retro to dubstep, club, trance, rock, and an ambient score that ranges from dramatic to terrifying.

The twin CD’s do a good job of presenting and dividing the music with much of the first disc containing the traditional soundtrack experience while the second disc is loaded with all sorts of original bits stripped right from the game world.  I was constantly resisting the urge to repeat a track because I knew the next was just as good or even better.  You’ll easily detect influences from games like Mass Effect 3 and movies like Tron Evolution while simultaneously picking out distinct samples of 8-bit music, and I swear I even heard the violent and unforgettable musical cue from the Psycho shower scene in one of the songs.

The one thing I enjoy most about soundtracks is that they allow me to remember and relive my favorite moments from a game (or movie) just by listening to the music.  That really wasn’t the case with Dead Rising 3 because I didn’t really remember hearing much in the way of music aside from the chilling opening song.  But it didn’t matter because the soundtrack experience was better than the game experience, making this one of the few soundtracks that works independently of its source material.  If anything, it sparked me to go back and play some more of the game just to find some of the most memorable musical cues.

Dead Rising 3 is easily the best soundtrack in my collection to date and I can’t imagine what it will take to ever make me hit the eject button.  The soundtrack is currently available in a 2-CD set on Amazon.com or you can download a digital version from iTunes, and as always, check out Sumthing.com for all the soundtracks for all the latest games you’re already playing and those that are coming soon.