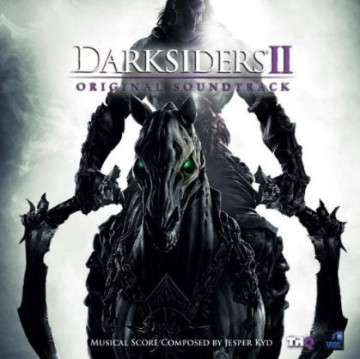 Over the past decade, soundtrack CD’s have become my favorite music genre; partly because music without lyrics is much easier to listen to while I do other things, and partly because it is a great way to relive the original game (or movie) experience. Much like a smell can trigger a specific memory, certain music cues can trigger your favorite moments from a past visual experience.

I knew the moment I heard the opening theme to Darksiders II that this was a soundtrack I just had to have, and the deeper I got into the game the bigger, and better, and more epic each music cue seemed to get.  Jesper Kyd is in top form with his latest masterpiece that sent shivers down my spine while playing the game and continues to do so while listening to the score outside the game…even as I type this review.

Darksiders II is a unique game, mixing in fast-paced action with an extremely rich universe and compelling narrative, and Jesper Kyd manages to tune each of his tracks to fit with the current situation whether it be the calming melodies of freedom and exploration as your explore the sprawling exterior maps, or perhaps something more intense and a bit dangerous as you dive deeper into an ancient dungeon or descend into the Kingdom of the Dead.  The game presents so many dynamic opportunities for both dramatic and visual diversity, and Jesper steps up to meet each one with a unique blend of tribal beats and soothing strings, many making use of Celtic-inspired themes and instruments such as flutes, bagpipes and specialty strings like fiddles, guitars, and banjos.   He also manages to drop in some pulsating battle music complete with choral chants that you’d expect in a Lord of the Rings soundtrack.

The game is clearly divided into two main themes; the land of the living and the land of the dead, and the score clearly dictates the appropriate mood of hope and despair for each.   The 26 tracks are laid out in a thematic way that is so seamless after listening to what I thought was just the first song for several minutes I was thinking “this is a really long track” only to see I was actually on track 5.  With the exception of a few major theme changes, most of the songs just blend together into a single musical event, and if you have already played the game you will most certainly have significant visual recall to many of your favorite moments as you listen to this soundtrack.

If you’ve already played Darksiders II then you already know just how fantastic and inspirational the music can get, and if you want to relive those emotions and continue to replay your favorite moments from the game in your head then you won’t find a better way to do so than popping this soundtrack into your home or car audio system and joining Jesper Kyd on his visionary musical adaptation of Heaven, Hell, and everything in between.

Darksiders II is now one of my top five videogame soundtracks of all time, and you can purchase your copy on iTunes or at   www.amazon.com/ .