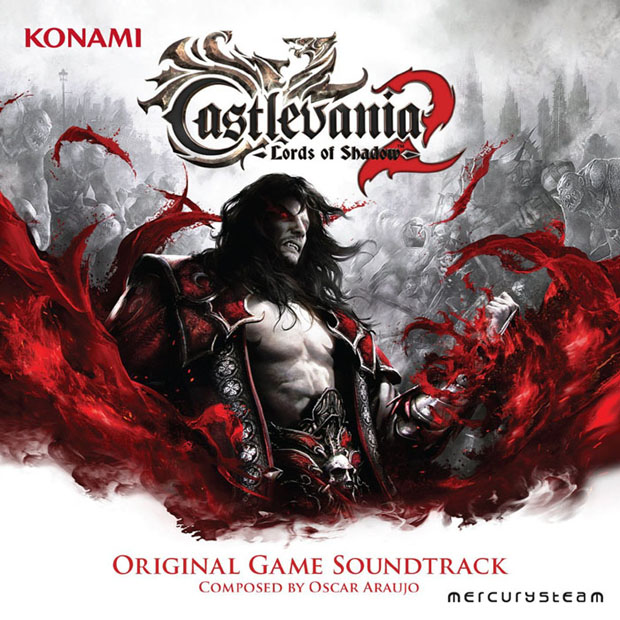 Castlevania: Lords of Shadow 2 has finally released to the delight of gamers everywhere, and it is impossible to miss or dismiss the overwhelming influence and impact that the game’s score has on gamers while they play it.  Thankfully, Konami and Sumthing Else Music Works have brought us the Castlevania: Lords of Shadow 2: Original Game Soundtrack so we can enjoy the masterful composition of Oscar Araujo even when we aren’t glued to our video game.

The word “epic” gets tossed around a lot these days; so much that is has probably lost a bit of its meaning, but make no mistake, this soundtrack is EPIC.  Spanning 19 stirring tracks (or 31 if you buy the Director’s Cut digital version) there isn’t a single bad track in this score, especially if you have already played the game as each musical cue will help recreate vivid flashbacks from your time within the game.  While you may hear some subtle influences from past Castlevania games there is nothing recycled here.  Araujo has created something wholly unique and totally immersive with a composition that is as large and majestic as the set pieces within the game.

The sweeping score covers all the sub-genres with pleasing melodies, intense action, and suspenseful horror; all easily identifiable with their place in the adventure, but every bit as enjoyable on their own, even if you’ve never played the game.  Tracks like “The Throne Room” and “Descent to the Castle Dungeons” are larger than life then you have tracks like “Carmilla’s Spell” and “City in Flames” that really set an emotional high bar for the experience.  Tracks 8 and 9 (“Dracula’s Theme” and “Hunter and Prey”) fuse together to create seven minutes of pure adrenaline.  Narrative keyboard solos are juxtaposed with heavy percussion moments that fuel the boss battle segments from the game, and while there are still a few instances of synthesized effects, they are much fewer and used for greater effect in tracks like “The Toy Maker” and “Dying for a Drop of Blood”, and when combined with the haunting chorus you get chilling tracks like “Gods Chosen”.

Recorded at the legendary Abbey Road Studios; Castlevania: Lords of Shadow 2 has a soundtrack that is easily on par with anything coming out for theatrical release and just as easily puts this as one of the top three listening experience for video game soundtracks in 2014.  The arrangements are on a scale of something you would expect from a Lord of the Rings movie.

Even if you haven’t played this latest installment in Konami’s legendary vampire franchise, you are most certainly going to enjoy this fantastic score, and for those who have played the game; prepare to relive the experience as the music is sure to spark all sorts of memories of your past adventures.   The Castlevania: Lords of Shadow 2: Original Game Soundtrack is now available on Amazon.com or you can download a digital version from iTunes, and as always, check out Sumthing.com for all the soundtracks for all the latest games you’re already playing and those that are coming soon.