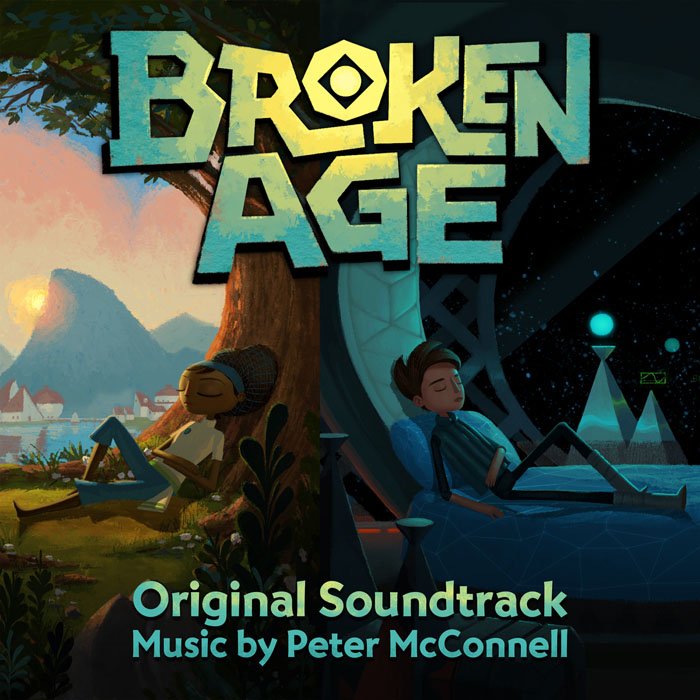 Releasing this week alongside the much-anticipated Tim Schafer adventure, Broken Age, is the official soundtrack composed by the award-winning Peter McConnell.   Tim and Peter are no strangers, having joined forces on past adventures such as; Psychonauts, Brutal Legend, Grim Fandango, Full Throttle, and Monkey Island, and the score for Broken Age continues in that fine tradition of emotionally driving themes that not only support the narrative but enhance the overall immersion in the wonderfully artistic world that Double Fine Studios has created.

The visual world of Broken Age is a storybook come to life and Peter’s score captures that’s fanciful innocence perfectly, while simultaneously weaving in the more ominous bits for those more dangerous moments in the story.  Tracks 6 and 7 (Maiden’s Feast and Mog Chothra), with all its big brass and sinister percussion, was a mix score and musical storytelling with a giant horn summoning the “kraken” combined with the theme from Jaws.  There is even a flutter of flutes near the end of track 7 where I could almost see Bubo the owl flying into the final scene of Clash of the Titans.

Broken Age tells two distinct stories and the music has two unique themes to fit those stories.  Shay’s adventures in space have a more futuristic sci-fi and adventurous theme about them while the music that supports Vella is more fantasy at its core, but there are times, even in Shay’s futuristic story, where the music will exude a childlike innocence.   Peter combines live recordings with the Melbourne Symphony Orchestra and smaller ensemble performances recorded with wind and string instruments to create a whimsical and memorable score.

Most of the 23 tracks are less than two minutes in length with only four tracks exceeding the three minute mark, so there are a lot of track gaps when listening to the soundtrack as a whole.  Even so, the tracks maintain a surprisingly linear and consistent theme that builds upon and support the tracks before and after.   There are exceptions that stand out from the rest like “The Lumberjack’s Cabin” and “Was That East or West” that have a twangy cowboy vibe, and “Shellmound Festival”, a Caribbean style party tune that could easily have been ripped from the Monkey Island soundtrack.

The Broken Age soundtrack is a fantastic way to relive the adventure outside the game, as the score is loaded with plenty of unique signature themes that will trigger memories of all your favorite moments from the game.   It’s also just fun music to listen to that runs the gamut of fantasy, sci-fi, action, adventure, and even a bit of danger.  Music samples are now available to preview on SoundCloud, and you can get the full soundtrack on January 28 at BandCamp.com or as part of the Steam Bundle.

For more information on Broken Age visit www.brokenagegame.com and check out our review for the first act of Broken Age.