In the world of video games (and often movies) it is very uncommon for a sequel to hold up to its predecessor. Metal Gear Solid 2: Sons of Liberty is about to smash that rule and change the way we view video games forever. Many of you younger gamers may only know of Solid Snake’s exploits from his last adventure, Metal Gear Solid, released on the original PlayStation in 1998 and more recently ported to the PC. 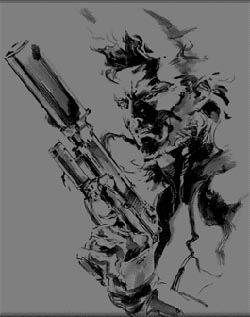 However Snake’s adventures date back as far as 1987 where Solid Snake debuted in the original Metal Gear released in Japan on the MSX. The following year Snake came to the US on the NES system and did quite well. Metal Gear 2 followed, again on the MSX, which was nearing its finale as a viable game system, and in 1990 our hero returned in Snake’s Revenge on the NES. Snake then vanished for several years until Hideo Kojima and his team started work on Metal Gear Solid in 1995. After a very lengthy development cycle Solid Snake returned once again in perhaps what is still considered by many to be the finest PlayStation game to date.

So what made Metal Gear Solid so good? At the time it was one of the first console action games to favor stealth over frontal assault tactics. The graphics were also unparalleled with many scenes using the little known hi-res mode of the PSX. Another first was the use of the actual 3D game engine to generate the cut scenes within the game making for seamless transitions between gameplay and storytelling. And the final gem in the Metal Gear crown was the voice acting. Using quality voice talent, Konami created one of the most professionally acted out dramas in video game history, the likes of which have yet to be exceeded even today.

If you are reading this then you are probably already anxiously awaiting the release of Metal Gear Solid 2 later this year. You are probably even more excited about getting your first taste of the playable demo being packaged in with Zone of the Enders releasing the end of this month. I was fortunate enough to get an advanced copy of the MGS2 demo and I am here to tell you that it is everything you can imagine and then some.

I’ve played the demo through several times and while it is rather short – you can complete your primary goal in about 15 minutes – there is just something about it that keeps you going back to play and play it some more. While I won’t go into the details of the demo here (you can read about the demo in my Sneak Preview), I do want to discuss what Konami has done and how it will change the way you look at video games.

Most of the basics you loved in the last game are back and better than ever. All of the stealth gameplay, cinematic camera angles, tense music, and intriguing story all combine to draw you into one of the most engrossing games of all time. The level of realism is unmatched by anything you have ever seen and the power of the PlayStation 2 is put to the test in this masterpiece.

MGS2 has broken new ground in creating a virtual living world that acts and reacts just like it would in real life. Weather is perfectly modeled. The outdoor portions of the demo all take place during a torrential rainstorm with blowing rain streaking through the sky and splashing off objects, the deck, and you. The wind blows causing your headband to flutter and tarps covering cargo on the deck flap in the high winds. Looking over the rail of the ship you can spot the lights of the city as swells crash against the hull sending white plumes of water spraying into the air. 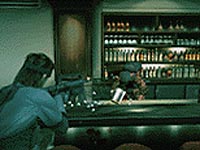 Physics don’t stop at weather though. Everything in this game is 3D and modeled to look and react just like it would in the real world. Shoot a bottle off the bar and it will break sending its contents dripping down the shelf. Knock over an ice bucket and you can watch the cubes slowly melt away. Shoot a bag of flour and the resulting cloud will cause Snake to sneeze. This amount of detail really allows for some never-seen-before gameplay where you are encouraged to try anything because just about everything works to some degree.

The enemies are some of the toughest you will meet, although their AI can be lacking at times. As explained by Kojima, if you make the soldiers “too hard” you could never win. Only in the movies (and in video games) do you send one man in against an army armed with only a tranquilizer gun and a pack of smokes. Soldiers are startled when you fire that dart into their butt but quickly resume their patrol until they pass out. If you are detected you can run and hide, and if you manage to avoid the guards long enough they will forget about you.

Kojima consulted with a military advisor to help create the realistic actions and reactions of the terrorists. The terrorists are all equipped with radios and frequently check in with each other, so if you take out one patrol you can be sure others will be by to investigate soon. While MGS2 does have traditional boss encounters they are not your traditional bosses. The demo only featured one such encounter, Olga, a very dangerous Russian woman who reminded me of the female terrorist in Die Hard 3 who casually strolled into the vault and started slashing guards’ throats with that wicked curved knife. Like any boss encounter, you must learn their patterns and respond swiftly and appropriately.

Stealth is once again your primary tactic in MGS2. Using the analog stick you can control how fast you move and how much noise you make. If you incapacitate a guard and another is on the way you will want to stash the body somewhere out of sight. Sleeping guards are easily awakened when discovered by their comrades and they also have a tendency to wake up when you leave a “zone” and return. Sticking them in lockers or throwing them overboard will help you to conceal your tracks. There are plenty of places to hide through the ship including lockers, alcoves in the passages, and even the classic cardboard box is back.

MGS2 offers five skill levels allowing everyone to tailor the game to their own abilities. Guards and items are randomized in the various skill levels and the guards get tougher as your darts take longer to kick in and wear off much faster. If you are playing on the hardest skill level and are spotted by even a single guard your mission is over. When they say “covert op” they really mean it! 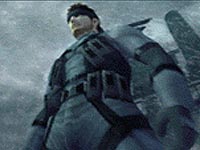 The storytelling in MGS2 is some of the best I’ve seen. Even though my demo was in Japanese (subtitled in English) I was immediately captivated from the beginning of the 8-minute opening movie to the cliffhanger ending of the demo. I was left with an uncontrollable urge for MORE! Fortunately the demo packs in lots of nice little things to discover that you probably won’t find on your first or even second pass through the ship. Aside from the opening movie you are frequently treated to various cut scenes that move the story along. The camera work for these movies is as high a quality as anything Hollywood is putting out these days and features all the cinematic effects, fades, zooms, etc. to keep you on the edge of your seat.

I’ll be the first to admit that Metal Gear Solid 2 was one of the primary reasons I bought my PlayStation 2 in the first place – that and Munch’s Oddysee (don’t get me started…) While I have been enjoying many PS2 titles since last October I have never truly been excited about my PS2 until now. Konami is about to unleash one of the most intense action games ever seen on a console, and if you don’t already own a PS2 you will soon have a reason to get one. I would recommend placing your pre-order for MGS2 now, otherwise you may find this game as hard to find as the PS2 was during its initial release.