Today EA SPORTS released new gameplay details for Madden NFL 15, including details on new defensive gameplay mechanics, upgrades to presentation and new training and tutorials designed to help players better learn the game of football. All this comes on the heels of the announcement of Richard Sherman as the winner of the Madden NFL 15 Cover Vote, as well as a first look trailer starring Carolina Panthers linebacker Luke Kuechly.

New defensive features and mechanics allow fans to transform into their rival’s worst nightmare, with an arsenal of new pass rush moves, new open-field tackling mechanics, two new defensive cameras and much more. For the first time ever you can see exactly when the ball-carrier is in your range, and opt for either a conservative tackle or try for a high-risk, high-reward aggressive tackle. Also, new mechanics to jump the snap, get blockers off-balance and disrupt the backfield make it more fun than ever to play as a defensive lineman or blitzing linebacker. In addition, enhanced defensive AI means that your teammates will know their assignments and be in position to make a play, allowing players to be more aggressive, with the knowledge that their teammates have their back.

Defense is only the beginning, as new broadcast and NFL Films-inspired presentation show the game in a completely different light. Improved player and coach models make personalities look incredibly realistic, and additional camera angles and player celebrations capture the most impactful, emotional moments of football. Fans will also enjoy a brand-new studio halftime show, complete with dynamic highlights, analysis and recaps of the first half that tell the story of the game. 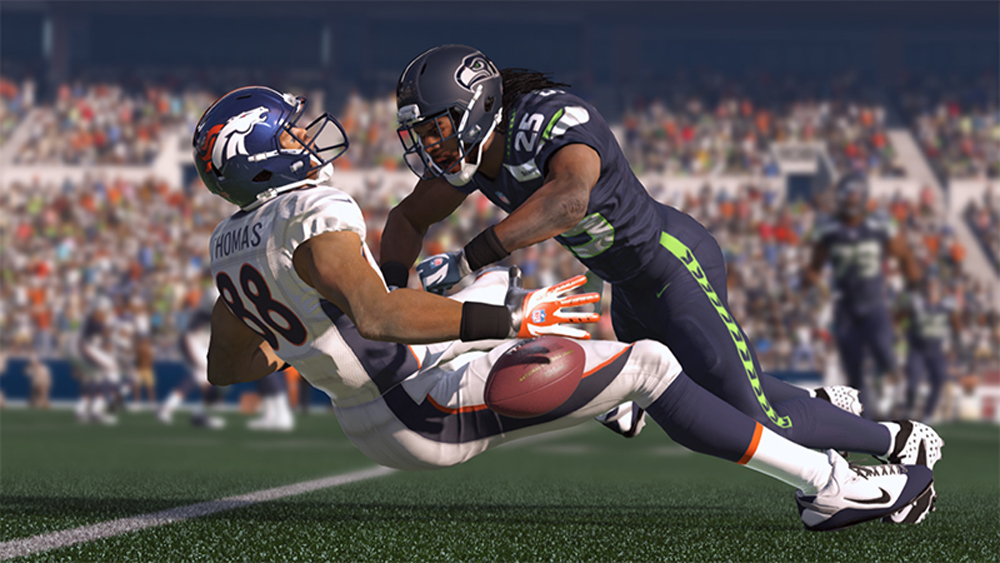 Madden NFL 15 also offers a robust set of drills and tutorials meant to increase not only in-game skills, but general football knowledge as well. Whether you’re a Madden NFL veteran or a series newcomer, the enhanced Skills Trainer mode will provide the opportunity to both learn the basics of the game and perfect the finer points of football. Once you feel prepared, step into The Gauntlet for the ultimate test of your football prowess, and see if you have what it takes to pass the supreme challenge. When in a game, the new play call system not only allows you to sort plays by formation, concept, personnel and more, but also introduces cloud-based suggestions drawn from millions of games played by the Madden NFL community. Now you’ll always feel empowered, knowing you’re calling the right play for the right situation.