Jak and Daxter
Redefining 3D gaming as we know it.

Naughty Dog became an overnight sensation with their hit release of Crash Bandicoot for the original PlayStation. Even more surprising was their subsequent release of several hit sequels that didn’t suck. If anything, the games actually got better with each reiteration. 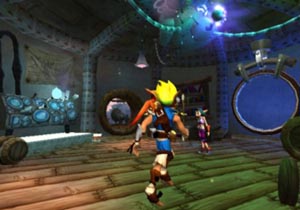 Back when the PS2 was first announced Naughty Dog jumped right onboard and declared that they would be doing something innovative for the new system and that it wouldn’t be another Crash game, although Crash 5 is due out this October for the PS2.

Jak and Daxter is the amazing new creation from Naughty Dog and could become the new reigning king of the PS2 platform genre. Offering a unique blend of adventure, exploration, and traditional platform action, this game is going to blend several genres to create a totally new gaming experience.

So who are Jak and Daxter? Jak is an Elf-like character with distinctive pointed ears and large eyes that look to be heavily influenced by Japanese animation. Daxter is Jak’s sidekick, a creature like looks like a cross between a fox and a weasel. The characters are highly detailed and amazingly animated. The character graphics as well as the enormous 3D worlds are colorful and definitely show they are rooted in the Crash series. 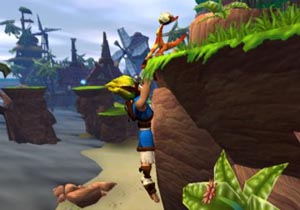 The power of the PS2 has never been so obviously exploited as it has with this game. The levels in J&D are huge and the game engine is capable of rendering 10 million polygons per second with each polygon retaining distinctive detail information and lighting information based on the time of day. This allows for a real-time day/night cycle where the game world gradually changes in appearance based on the time of day; an effect that must be seen to be believed. Assuming you can imagine such a world, now imagine it with no pop-up or fogging tricks.

While Jak and Daxter may be gearing up to be the hottest PS2 seller of the Christmas season there is some underlying technology being used in this game that will rise above this title and hopefully influence the way all future 3D games are made. Anyone who has ever played a 3D adventure game probably has their own personal horror stories about how the camera ruined some part of their gaming experience. It either caused you to fall into a pit, or get hit by an unseen monster, or get stuck on a wall. Naughty Dog has solved all these problems by actually making the camera a “character” in the game. 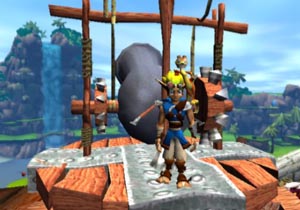 Granted, cameras have been getting better in the past few years and we have seen some truly original uses of cameras. One of my favorite examples is the “cameraman camera” in The Devil Inside where you could actually play the game from the view of a man running after you with a TV shoulder cam. The view bounced around and had intermittent static much like an episode of cops, or even worse, the Blair Witch Project.

The most popular solution to camera problems is to simply make the offending object transparent. While this tactic works and is quite useful it tends to make you realize you are playing a game. Perhaps the best example of an intelligent camera to date is in Mario 64. The designers actually used the environment to determine the best location of the camera. This eliminated many of the camera problems that are famous in games like Tomb Raider, Indiana Jones, and Soul Reaver, just to name a few.

Naughty Dog has actually given the camera an intelligence (AI) of its own virtually making it a character in the game. With the sheer size and detail of the game levels in J&D, this was the only conceivable way of solving the multitude of potential camera glitches that would have plagued this game had they chosen a more conventional camera system. 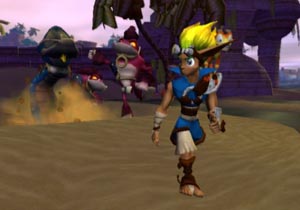 The camera system is quite unique and for the most part remains fixed behind Jax in the traditional 3rd-person shoulder view. When you start to move around and get Jax behind objects the AI kicks in and determines the best (and most realistic) path to get him back in view. Unlike other games where the camera would pass through solid objects, the AI determines where the camera is and where Jax is then calculates a physical path that it can take to get there. Once the path is determined the camera moves quickly and smoothly to get Jax back into the picture.

The technology is really no different that the pathfinding routines used to make your AI bots get around in games like Unreal Tournament, only now the AI is controlling the camera which in turn gives you your perspective on the world. To make it even more interesting, J&D features nearly a dozen such intelligent cameras that dynamically switch to the best view for your current situation. While you always have the ability to manually tweak the camera view, you will probably never have the need to do so – the AI is just that good.

While Jak and Daxter is still several months away the game is already breaking new ground in both PS2 quality and originality, not to mention amazing innovation in 3D camera technology that we can only hope is adopted or at least emulated by anyone else planning to make a 3D action/adventure game for any console.