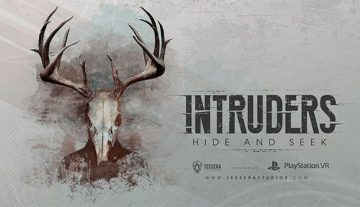 Sony Interactive Enterntainment Spain (SIE Spain) announces that Intruders: Hide and Seek, will be released (both retail and digital) on February 13th with a price tag of €19,99 / $19,99 and a PEGI 18. The game, developed by Spanish company Tessera Studios, will be published by Daedalic Entertainment. Tessera Studios won the Best Game award at the 3rd edition of the PlayStation® Talents Awards, which gave them the chance to develop their project for PlayStation®VR.

Intruders: Hide and Seek is a PlayStation®VR compatible, first-person stealth game where the player plays as Ben, a small child that witnesses how three violent strangers tie and torture his parents at his own home while they try to find something. The player has to navigate the house avoiding detection and sneaking past his enemies. As the story goes on, the players will discover the reasons for these horrible events, and they will have to help the family in the worst night of their lives.

Intruders: Hide and Seek won the Best Game prize at III PlayStation®Talents awards, which granted them a prize of €10.000 plus a marketing campaign valued in €200.000, PS4™ development kits, and a ten-month stay at the PlayStation®Games Camp in Madrid. Thanks to the award, PlayStation committed to publish the game in PlayStation platforms and Tessera had the help of the mentors associated with the PlayStation®Talents program. Besides the Best Game award, Intruders: Hide and Seek also got the Press Award at the same ceremony, as well as the Best Student Game award an the Fun & Serious Game Festival back in 2016.

Intruders: Hide and Seek will be available exclusively for PlayStation®VR on February 13th as a digital download on the PlayStation Store with a 19,99€ price and a PEGI 18.

WILLY MORGAN AND THE CURSE OF BONE TOWN NOW AVAILABLE

HYPER SCAPE IS NOW AVAILABLE
Be the first to comment!
Leave a reply »