Interview with an Alien

Interview with an Alien 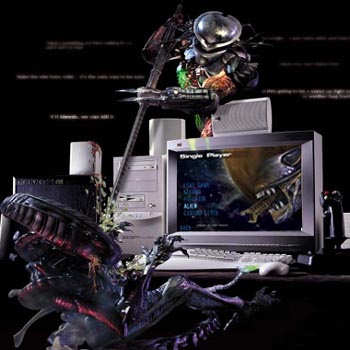 Since it’s much anticipated release in 2001, Aliens vs. Predator 2 has set the gold standard for PC (and Mac) action gaming within the world of the popular Aliens and Predator movie franchises. Building on the strengths and success of the original Aliens vs. Predator title, Aliens vs. Predator 2 (AvP 2) captured the attention of every would-be Corporal Hicks who ever dreamed of toting a pulse rifle, while refining and enhancing two essential gameplay experiences in addition to that of the Colonial Marine – the Alien Xenomorph and Predator species experience. With a trio of species to play with and an engaging storyline intertwining the fates of each race, AvP 2 filled a much needed niche for futuristic sci-fi shooters, and kept a host of game reviewers checking their beds for face huggers at night.

Two years later its legacy remains strong, and with the impending theatrical re-release of the original Alien along with the upcoming release of the Aliens vs. Predator movie previews, its popularity is undiminished. I recently had the chance to catch up with two stars of the Aliens vs. Predator phenomenon, Fuzzy the Alien Xenomorph and Frederick the Predator, where we talked about gaming, movies and life.

Miguel (GCM): Fuzzy, Frederick, you’ve both come quite a long way since your days as menacing sci-fi extras from the early 1980’s. How has life been treating you?

Fuzzy: Quite good Miguel. When my agent and I first discussed the role for Alien, I had some misgivings about it. I was new to Hollywood and didn’t want my first role to typecast me into an iron-clad pigeonhole, something that might be a detriment to my career. But when my agent pointed out that my acid blood, razor sharp claws/fangs, menacing hiss, bulbous xenomorphic head and overwhelming tendency to eviscerate humans fit exactly with what the script called for, I went for it.

Miguel (GCM): And is your agent still with you today?

Miguel (GCM): And speaking of Terminators, Frederick, how was it working with Arnold Schwarzenegger in the original Predator?

Frederick: Fabulous Miguel, absolutely fabulous. Initially there was some tension on the set, what with my being an intergalactic predatory alien who collected skulls and hunted humans like animals, but Arnold told me I reminded him of his Bavarian nanny. He was the consummate professional, on and off the set. We still golf every month, and my daughter baby-sits his little ones on weekends.

Miguel (GCM): Frederick, Fuzzy tell me about your roles in the smash video game, Aliens vs. Predator 2.

Fuzzy: I had worked with Frederick before on the original Aliens vs. Predator game and had a great time doing it. Rebellion software was very accommodating when my Acid-blood inadvertently began to bore holes in their rendering PC’s, and they displayed great patience when I accidentally devoured a few interns.

Frederick: My Predator sequel, based in LA, didn’t go over very well with audiences. Apparently there was a huge demographic that was able to detect the identical storyline we transplanted from the first movie. You humans can be quite clever. As a result I had some downtime and had just returned from a recurring gig impersonating Milli Vanilli. So, when we both got the call from Monolith for AvP 2, I was ready to go.

Miguel (GCM): What have you both been up to lately?

Fuzzy: Since most AvP2 players have finished the single player portion of the game, most of our time has been spent online moonlighting on servers and making guest appearances during survivor, evacuation and team deathmatch games.

Frederick: It’s fun, but it can be pretty harrowing at times. Imagine being fragged by space marines, corporate gun-toters and xenomorph aliens over 50 times in one match. And those aliens are everywhere, crawling and running and jumping with their cheap ‘leaping’ ability…sheesh.

Fuzzy: Hey! What else do you expect? Humans are loaded to the gills with firepower, and you Predators, in addition to high-tech weaponry, have the ability to cloak. I’ve personally been toasted online over 2000 times with the Flamethrower – and it doesn’t even look as cool as the one from Return to Castle Wolfenstein! (Fuzzy slaps Frederick on the hand with his poison tipped tail)

Miguel (GCM): Well gentlemen, returning out attention to the interview at hand. Fuzzy, you’re quite intelligent sounding for a bloodthirsty xenomorph alien. How did you come by such an excellent grasp of the English language?

Fuzzy (hissing once more at Frederick): I think in this industry being bi-lingual is a must. Here in Southern California and Hollywood that consists mainly of speaking English and Spanish, but since I ate my first two Spanish language instructors, I felt it best that I refine my English in my own spare time.

Miguel (GCM): Frederick, that’s quite a first name for a Predator. How did you come about it?

Frederick: Well Miguel, just because I enjoy ripping human spinal columns from their owner’s bodies doesn’t mean I don’t have other interests. In fact ever since my arrival on earth I’ve grown quite fond of many leisurely activities, including backgammon, poetry, gardening, literature, torturing small cats, and history. In fact it was in honor of Frederick II Hohenstaufen (Holy Roman Emperor 1194-1250) that I chose my own name. He was a commander, warrior and leader. I thought it quite appropriate.

Miguel (GCM): Really? The same emperor who went insane as the product of excessive familial intermarriage?

Miguel (GCM): Just a few more questions gentlemen. Now, AvP2 uses the Lithtech Engine, famously known for driving the graphical power behind the popular 60’s Spy series No One Lives Forever (NOLF) and No One Lives Forever 2. In fact, some people have made striking comparison between the look and feel of these (AvP2/NOLF) games, despite the wide differences in subject matter. Have any of you either been mistaken for an extra from No One Lives Forever?

Fuzzy: It’s funny that you’d mention that because both games were created on the Sierra (Sierra Interactive, Game Publisher) studio lot and we were right next door to them during production. One time, I convinced Kate Archer to loan me some of NOLF’s costume accessories, leotards, striped shirt, face powder etc. I convinced Frederick that the producer wanted him to wear it, so (in one scene) he ended up pouncing on a group of marines in a darkly lit hallway dressed in psychedelic greens and oranges with mime makeup on his face. I think it was the one time Frosty actually looked scared. I don’t think they left that cutscene in though.

Frederick: What?! You told me Monolith would fire me if I didn’t put that stuff on.

Miguel (GCM): Well gentlemen, that’s about all the time we have today. (Moves to clear the room as fast as possible) I’d like to thank Frederick the Predator and Fuzzy the Xenomorph for taking time off from their busy schedules to answer our questions today. (Runs out of the room) (Combatants look up from scuffle)

Frederick: Do you have my agent’s cell number?

Tune in next time when I trade in my rocket launcher for an avatar in the Sims Online.