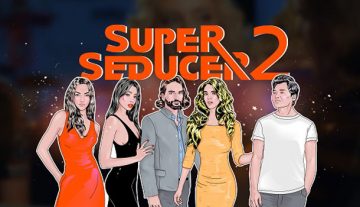 In Super Seducer 2, dating masters Richard La Ruina and Charlotte Jones guide players on how to become the most delightful bachelors and bachelorettes on the market. Adversely, they criticize and demonize actions that overstep boundaries and disrespect potential love interests. Richard La Ruina — in collaboration with a predominantly female cast and crew, his wife and producer Kate La Ruina, and America’s #1 Asian Dating Coach JT Tran — implements his most sound and inclusive dating tips into Super Seducer 2. Exploring everything from social cues to the psychology behind a first impression and everything in between, Super Seducer 2 teaches players of different backgrounds and gender how to become irresistible and make the right flirtatious choices so that they may soon find themselves in the arms of their soulmate.

“So many lovely and talented people helped make Super Seducer 2 a reality and a soon-to-be hit, including fans of the first game and even its critics,” said Richard La Ruina, creator of Super Seducer 2. “From day one, we utilized the feedback we received to make the sequel a more inclusive experience for all. Based on the game’s Steam wishlist count, that’s resonated well.

“The team and I hope,” he continued, “that players have even more fun this time around and truly learn how to be more confident and considerate when out on the dating field; that is our primary goal, and we ask those who remain cynical of our efforts to try Super Seducer 2 for themselves.”

“We put everything into making Super Seducer 2 as approachable and funny as possible, and I’m very proud of the result,” said Kate La Ruina, producer of Super Seducer 2. “I hope the fans of the first game love it and that we can convince some of the detractors to give the game a chance. We set out to make people laugh and teach them along the way how to properly start a relationship which is something everyone can relate to.”

Super Seducer 2 is a mature, non-nudity FMV game and true-to-life dating simulator that teaches men and women alike how to take their skills (or lack thereof) with a love interest to the next level. Like its predecessor, Super Seducer 2 features branching dialogue options that give players control of how each scenario ends. Players that make the wrong moves in their flirtatious conquests face a variety of awkward outcomes that range from simple eye roll to a thoroughly deserved rear choke hold. From professional dating tips from top advisors to outright cringe-inducing cautionary blunders, Super Seducer 2 is sure to leave a lasting impression and give you the tools needed to find that special someone once thought to be out of your league!

Key Features of Super Seducer 2 Include:

Super Seducer 2 is available now for purchase for Windows PC on Steam for $12.99 USD at https://uberstrategist.link/SuperSeducer2-Steam. “The Dark Side of Seduction?: The Super Seducer 2 Documentary” and Richard La Ruina’s second book “Soulmate Sequence” are also available for $4.99 USD each, exclusively through Steam as a standalone DLC purchase or with the game in a discounted bundle.

Once they’ve completed the game, fans can directly influence the content of the newly announced Super Seducer 3 ahead of its March 6, 2019 release by contributing to the game’s Steam discussion forum or by sending direct feedback to creator Richard La Ruina through Facebook or Twitter.