Hang on to Your Carrots — the Rabbit Army Has Released a Playful New Video for S.W.I.N.E. HD Remaster 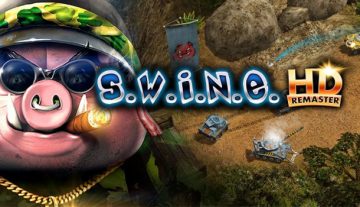 In their new Public Service Announcement, downloadable below, the long-ears are courting new soldiers in a fierce and insult-ridden fight against the merciless Pig Army. It turns out nibbling carrots and hopping around aren’t the only skills the rabbits possess — trash talk happens to be at the top of their repertoire!

Along with the new recruiting video, we’ve received word from the Army Command that S.W.I.N.E. HD Remaster — along with other hit games from Assemble Entertainment such as Leisure Suit Larry – Wet Dreams Don’t Dry, and the titles of the Pizza Connection series — are now discounted as part of the Steam Summer Sale.

Check out the new video, and grab a copy of S.W.I.N.E. HD Remaster now — there’s never been a better time to join the wildlife warfare!

S.W.I.N.E. HD Remaster features numerous improvements and visual enhancements over the original game, such as an integrated language selection, a polished UI, and improved unit ordering for smoother gameplay. S.W.I.N.E. HD Remaster features the original 2001 S.W.I.N.E. soundtrack, an artbook with previously unreleased concept art, and a developer documentary detailing the process behind this recreation of the beloved classic. Developer Kite Games have worked with fans to extensively modernize the game to bring big, beautiful bunny-blasting, pig-punching battles to PC. For more information, visit https://swinethegame.com.

Exhilarating Musou Action Returns in SAMURAI WARRIORS 5
Be the first to comment!
Leave a reply »