The release of Grand Theft Auto Double Pack comes just weeks after the release of the highly anticipated Scarface: Anniversary Edition DVD. As any gamer/Scarface fanatic undoubtedly already knows, the two games bundled in Double Pack, GTA3 and Vice City, contain references to Brian De Palma’s blood-soaked, expletive-filled gangster epic starring Al Pacino as the memorable Tony Montana. However, those who haven’t seen this so-called hip-hop classic are most likely unaware of them. Fear not, “my little friend,” as we reveal most of the ties between Rockstar’s Double Pack and De Palma’s Scarface. (WARNING: Spoilers herein!) 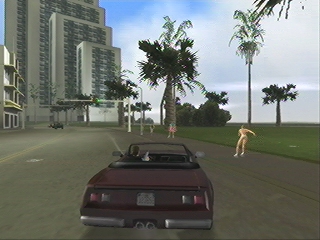 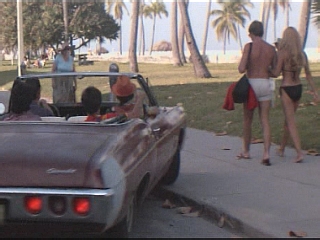 Both Grand Theft Auto: Vice City and Scarface are set in the ’80s, a very special time. Equally as special is where the action goes down: Miami. While Scarface takes place in the real Miami, Vice City plays out in a fictional Miami-esque city, replete with sunny mornings and neon-lit evenings. In fact, the titular Vice City bears a close likeness to Miami and spotlights some of the locations from Scarface. The two share similar types of architecture, inhabitants, and vehicles, though nothing in Vice City is an exact replica.

The World Is Yours 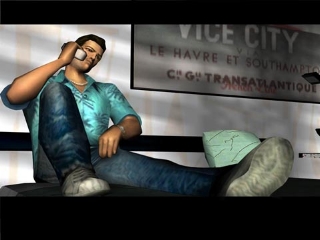 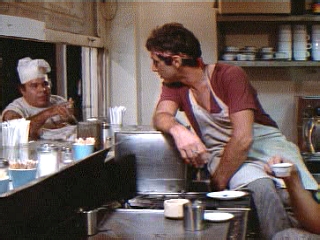 Like Tony Montana – who gets his start in America washing dishes at the Little Havana Restaurante (upon completing a hit to earn his green card) – the protagonists of GTA3 and Vice City begin at the very bottom of the criminal ladder, taking up menial jobs for various lowlifes. Likewise, all these characters aspire to rise to the top of their respective crime world. Tony Montana and Tommy Vercetti (Vice City star) do particularly well for themselves once they dispose of the crime bosses standing in their way. Afterward, both of them spread the money around quite generously, buying up property and businesses. Montana invests in travel and management companies and opens a beauty salon for his sister, Gina. On the other end, Vercetti buys up everything from a film studio to a nightclub. Which leads us to… 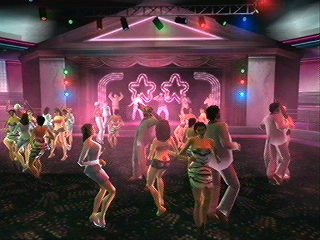 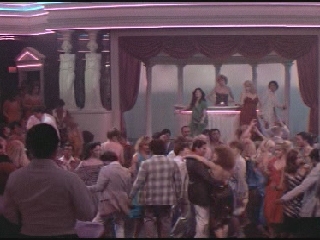 Most who have played Vice City would agree the Malibu club is a happening place. Every criminal needs a hangout, after all, and the Malibu fits the bill nicely with its fancy décor, fully loaded bar, powerful sound system, and lively dance floor. It even has a stage, on which the “Village People” perform. Well – guess what – the extravagant nightclub in Scarface, the Babylon, has similar characteristics. That’s because it was seemingly the inspiration behind the Malibu. (Watch the movie, then play the game to see the similarities.) Sadly, the music at the Malibu is not composed of songs from Scarface, but ironically, one of the radio stations in GTA3 is. 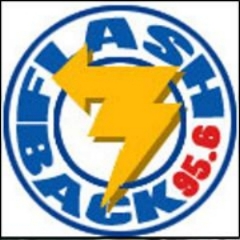 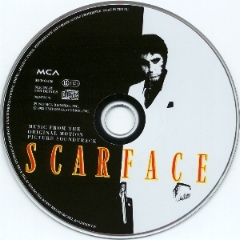 Although GTA3 has fewer Scarface references than Vice City, it does have said movie’s music. On the game’s Flashback radio station, hosted by the energetic Toni, listeners are treated to ’80s nostalgia. The five songs that make up the playlist were lifted from the sought-after Scarface soundtrack, produced by Grammy-winning Giorgio Moroder. These include:

The rocking, guitar-fueled “Push It to the Limit” nicely contrasts the disco beats of the other songs. The Scarface soundtrack itself contains twice as many tunes as those featured on Flashback, with the movie’s unforgettable theme songs being omitted from GTA3 for obvious reasons. 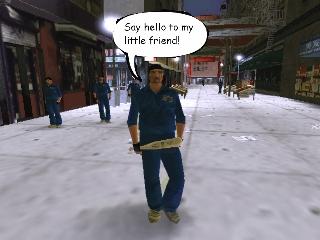 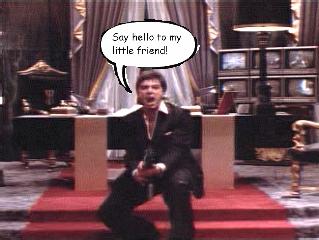 What truly makes the GTA games come alive are the wacky pedestrians who fill the streets. They say all kinds of crazy things, and some of them apparently have a thing for Scarface. The hoods quote and paraphrase lines from the movie (e.g., “Say hello to my little friend!”), as well as allude to particular scenes. GTA3 even includes the voice talent of one of the movie’s stars (see next section). 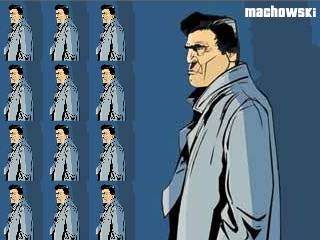 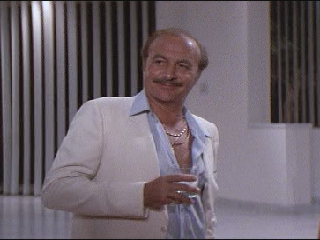 If you recognize the voice of Ray Machowski in GTA3, chances are you’ve heard of Robert Loggia. He’s the actor who played Frank Lopez in Scarface and provided the voice for GTA3’s Ray Machowski. Fortunately for Loggia, Machowski does not meet the same nasty fate as Mr. Lopez in Scarface. That’s not to say Machowski is any less unsavory of a character: He’s a crooked cop (à la Mel Bernstein from Scarface) who works for the Yakuza and spends most of his time hiding out in a grimy bathroom. Speaking of bathrooms… 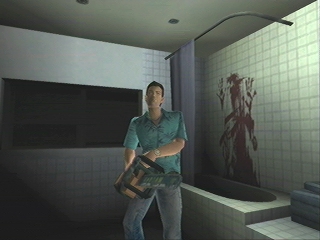 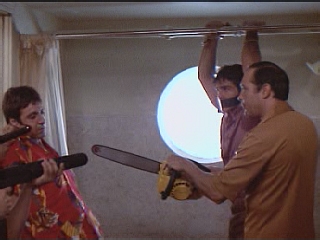 In Scarface, one of the most gruesome scenes revolves around a sour drug deal with Colombian gangsters and involves a hotel bathroom and a chainsaw. Go ahead and fill in the blanks. In Vice City, Tommy Vercetti can wield a chainsaw (one mission even encourages it) and discover a secret room that pays homage to the aforementioned movie scene. The room is Apartment 3C, and it’s near a Pay ‘n’ Spray in Ocean Beach. Once there, Vercetti will find, among other things, a chainsaw lying in a bloody bathroom. 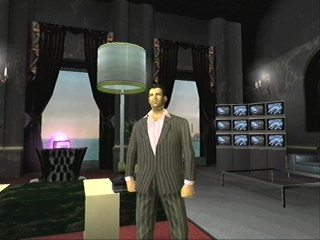 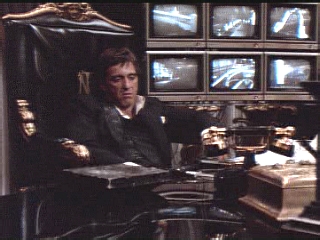 Like any criminal kingpin worth his or her salt, Tony Montana and Tommy Vercetti eventually move into huge mansions that come complete with a high-end surveillance system to monitor the premises and a group of goons to boss around. While Montana pays for his estate (using drug money, of course), Vercetti acquires his by assassinating the previous owner, Ricardo Diaz. Both criminals make a last stand in the mansion (Montana battles Alejandro Sosa’s assassins; Vercetti goes to war with Sonny Forelli and his henchmen), but only one of them comes out on top in the end.

Interestingly, although the exterior of Vercetti’s manner differs in appearance from Montana’s, the interior is fairly similar. The color red adorns most everything inside, with a sweeping staircase greeting visitors. What’s more, Vercetti’s office closely resembles Montana’s (video monitors and all), while the downstairs room has the same palm tree mural that decorates Frank Lopez’s private office. The only notable omissions are the “world is yours” statue and luxurious master bedroom.

All things considered, though, Grand Theft Auto Double Pack is probably the closest gamers will get to living out their Scarface fantasies!