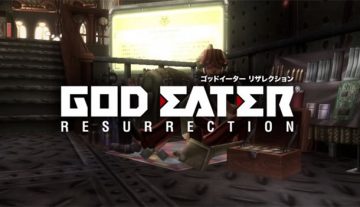 BANDAI NAMCO Entertainment America Inc., a world leader in anime video game development and publishing, today released GOD EATER 2: RAGE BURST for the PlayStation®4 computer entertainment system, PlayStation®Vita a handheld system, and PC via STEAM®. Gear-up and assemble a team of up to three friends to hunt and take down massive Aragami threatening to reign terror upon the world.

Taking place three years after the events of GOD EATER: Resurrection, a mysterious red rain sparks a fatal pandemic called the Black Plague. With no established cure, this scourge has a mortality rate of 100% once infected. Members of the Special Unit “Blood”, an affiliate of the Fenrir Organization, are sent to assist and investigate. Take control of their newest recruit and master incredible weaponry, challenge enormous monsters, and cooperate with a memorable cast of characters fighting for humanity.

Players will take up arms with their God Arcs, powerful weapons forged from Oracle Cells and the only weaponry capable of destroying the Aragami. God Arcs come in many shapes and sizes to accommodate all styles of melee combat including lumbering great hammers, swift short blades, long broad swords and wide-arcing scythes. God Arcs also transform into a variety of firearms for long range targets. New to GOD EATER 2: RAGE BURST are over 100 Blood Arts players can learn throughout the game. These Blood Arts can enhance God Arcs by adding various attributes to attacks, giving players a definite edge during battle.

“GOD EATER 2: RAGE BURST expands upon the exciting monster slaying gameplay of GOD EATER: Resurrection, released earlier this year for the PlayStation 4 system and Vita handheld system with 100 hours of gameplay content and an engrossing storyline with memorable characters,” said Eric Hartness, Vice President of Marketing for BANDAI NAMCO Entertainment America Inc. “Whether you are playing solo or with three other friends online, taking on the monstrous Aragami provides the perfect rush of adrenaline and sense of satisfaction after a long day at school or work.”

GOD EATER 2: RAGE BURST is rated “T” for Teen by the ESRB and has a MSRP of $59.99. For more information regarding the GOD EATER franchise please visit http://www.god-eater.com.